The Salar de Uyuni is the world's largest and highest salt falt, and it lies in the south-west corner of the Bolivian altiplano ("high plains"). The salt flat itself is a spectacle to behold, as are the numerous lagoons, geysers, ice-capped mountains, and hot springs in the area. I went to the Salar de Uyuni on a tour from the town of Uyuni in Bolivia, before continuing on to the Chilean frontier. 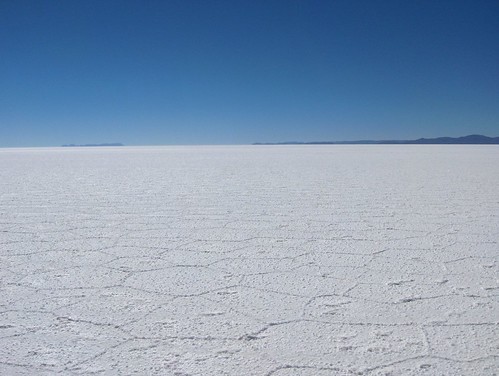 Salt, as far as the eye can see.

Yesterday, we did the actual salt flats of the Salar de Uyuni. Today, we were done with the salt flats, and what we saw at each stop of the 4x4 was lagunas, lagunas, and more lagunas (lit: "lagoons"). We saw Laguna Colorada (lit: "colourful lagoon" — so called for its striking red, blue, white, and grey colours), as well as various other lagunas, most of which I can't remember the name. Also saw lots of cool pink flamencos (lit: "flamingos") in the lagunas, and a tonne of vicuña (small furry animals, kind of like something in-between a llama and a deer). Spectacular scenery all the way.

The second day of our salt flats tour, began very early this morning, with a wake-up at the Hotel de Sal at 5am, and a freezing-cold start to the day's 4x4 driving, at 6am. We drove for about two hours, hoping that our feet wouldn't completely freeze in our boots before the sun rose (which it did, thank G-d, during the drive); and then the first sight of the day was the famous Ollagüe volcano. Although you can't see that much of the volcano — since it sits on the Bolivia-Chile border, and since most of it is on the Chilean side — you can still see the smoke rising out of its active cone, from which lava apparently spews quite regularly.

Very awesome place: a hotel on the edge of the Salar de Uyuni, built almost entirely out of salt! For the first night of our salt flats tour, we stayed in this ingenious and quite luxurious place. Impressive building, great rooms, and nice food. They also sell Chilean and Argentinean wine (which we bought, and drank — and it was good, unlike Bolivian wine).

Great little kid, and the eldest son (out of three kids) of our tourguide for our three days in the Salar de Uyuni, Raul. This was Willy's first time tagging along with his Dad on a salt flats tour, and he loved it. He was brought along mainly to help with the cooking, but also to see how the tourguide thing is done (he'll probably be a guide too, one day), and just to enjoy the ride. I gave him my salty dice at the end of the trip.

Our three-day tour of the Salar de Uyuni began with lots of salt this morning, and it continued at lunchtime with lots of cacti (that's plural for cactus!). We visited "Isla Incahuasi" (lit: "Inca House Island", with "huasi" being "house" in Quechua), an island in the middle of the salt flats, which is completely covered in cacti. The Incas planted them there during their heyday, to mark the island as a place to take shelter and to set up camp, when making the journey across the salt. And in the wet season (Nov-Apr), when the entire salt flat gets flooded with about 50cm of water, this place really is an island.

This morning began our tour of the Salar de Uyuni, the world's highest and biggest salt flat. After a brief visit to the Uyuni train cemetery, we took off to the flats themselves. Our group has six people (plus our guide, Raul, and his son, Willy): myself, Chris, Leila, Christina, another Swiss (an older woman, can't remember her name), and a French dude (can't remember his name either). We drove across the salt flats in our Land Cruiser 4WD this morning, and it made for a very salty morning indeed.

Leila is a blonde-haired young girl from Basil, Switzerland; and Christina is her high-school friend from southern Germany. These two girls were in our tour group, for our three-day tour of the Salar de Uyuni; and we then kept travelling with them for a few days, until Iquique in Chile. They're great fun; they're rougher than they look; and speaking of which, they don't look too bad at all.

Bought one of these beautiful little packages of cup-and-five-dice, just on the edge of the Salar de Uyuni, as part of my three-day tour of the area. Made entirely out of salt, which is then fired in an oven, and glazed and painted. The dice were used for many a game of Yahtzee over the course of the salt flats tour.