Very awesome place: a hotel on the edge of the Salar de Uyuni, built almost entirely out of salt! For the first night of our salt flats tour, we stayed in this ingenious and quite luxurious place. Impressive building, great rooms, and nice food. They also sell Chilean and Argentinean wine (which we bought, and drank — and it was good, unlike Bolivian wine). 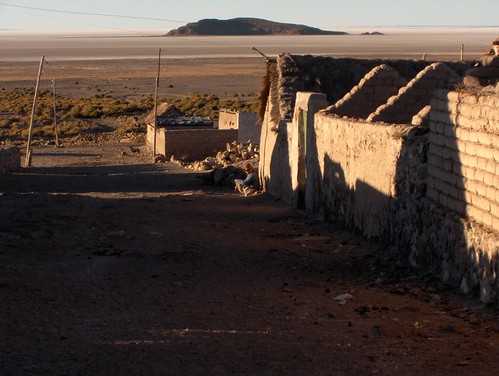 Little town that the Hotel de Sal is in.

Rooms: very stylish, and reasonably warm (considering the temperature outside, at night).

People: well, it's the people that do the salt flat tours — i.e. any and every gringo in Bolivia!

Staff: mix of not-to-be-seen-much locals dashing round in the kitchen, and the tourguides, who help out as well.

Location: well, considering that it's in the middle of nowhere, on the edge of a salt flat, I can't exactly say it's "central" — but it's a pretty cool spot.

Food / Internet: dinner and breakfast is very nice. Internet: hahahahahaha! Nearest Internet is about 100km's away.

Hot water: I didn't try them; but apparently for Bs. 5 (5 min max), the showers aren't bad (and no, the bathrooms aren't made out of salt, so don't worry about your shower wall disintegrating!).