Our three-day tour of the Salar de Uyuni began with lots of salt this morning, and it continued at lunchtime with lots of cacti (that's plural for cactus!). We visited "Isla Incahuasi" (lit: "Inca House Island", with "huasi" being "house" in Quechua), an island in the middle of the salt flats, which is completely covered in cacti. The Incas planted them there during their heyday, to mark the island as a place to take shelter and to set up camp, when making the journey across the salt. And in the wet season (Nov-Apr), when the entire salt flat gets flooded with about 50cm of water, this place really is an island. 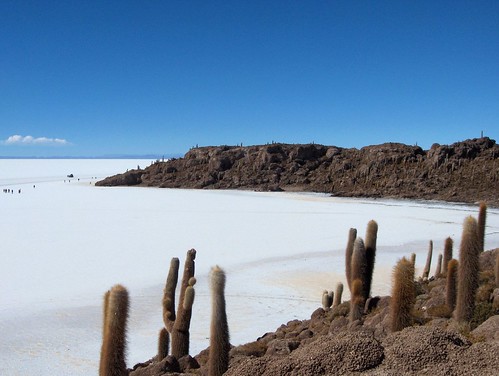 Incahuasi, the island covered in cacti. 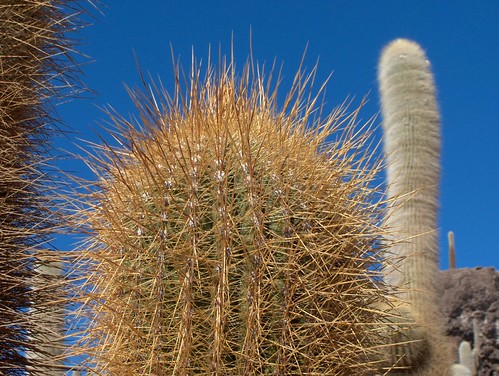 We pulled up at Incahuasi in our Land Cruiser, and our guide gave us a while to do the little hike to the top of the island, while he prepared our lunch. There's the usual "entry fee" of Bs. 10 for the island (which, this being Bolivia, has to be paid when you get there — they couldn't possibly include it in the price of the tour — in cash, to some random dude with a bunch of tickets), which covers hiking the trail, and using the loo on the island. Our group hiked up to the top, where we had a great 360° view of the salt flats all around, and where we got some nice group photos. 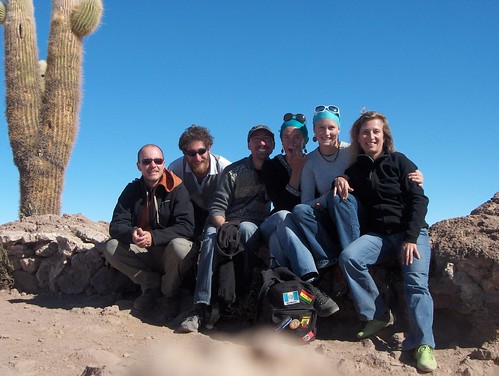 At the top of Incahuasi: French dude, myself, Chris, Christina, Leila, and Swiss woman (left to right).

We could have stayed up there all day; but a great lunch of steak and mash was waiting for us at the bottom. And we were warned that the food would be Really Bad™ on this trip — ah well, maybe we just picked one of the better companies?