The second day of our salt flats tour, began very early this morning, with a wake-up at the Hotel de Sal at 5am, and a freezing-cold start to the day's 4x4 driving, at 6am. We drove for about two hours, hoping that our feet wouldn't completely freeze in our boots before the sun rose (which it did, thank G-d, during the drive); and then the first sight of the day was the famous Ollagüe volcano. Although you can't see that much of the volcano — since it sits on the Bolivia-Chile border, and since most of it is on the Chilean side — you can still see the smoke rising out of its active cone, from which lava apparently spews quite regularly. 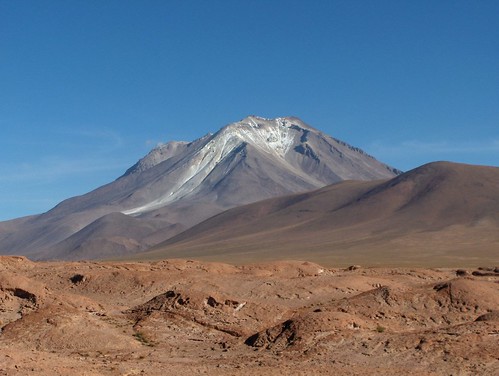 Ollagüe volcano in the morning. You can see a bit of smoke rising from its cone, but you can’t see the lava from Bolivia.

Very cool: first time I've seen an active volcano in my life! Ah well, I'm sure I'll be seeing plenty more, when I get over to Ecuador. Nice sight, but not sure why we needed to see it so damn early — we almost froze to death in the cold.