Located about four hours northwest of Cusco, the Río Apurímac is a massive, often rapid river that begins near Arequipa in southern Peru, and that flows through steep gorges through much of the mountains, before eventually flowing down into the jungle, and forming the largest of all tributaries that feed the mighty Amazon. I went on a rafting trip down the Río Apurímac for three days, going through the deep valley that it forms, and having an awesome time on the rapids. 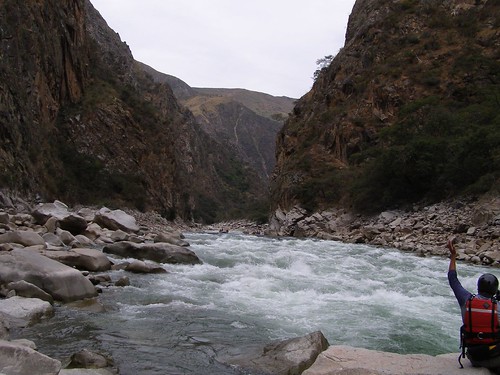 The Apurímac valley and river.

You've read the stories. You've seen the photos. Now, you can watch the video of my three-day rafting trip on the Río Apurímac. Provided courtesy of the fine folks at Mayuc, who put together this amazing 35-minute collection of motion-picture clips of our time on the river (with cool music mixed in, as well!). Video cut into four parts, and reduced in size and quality, in order to work on YouTube. Enjoy, amigos.

For our third and final day of rafting on the Río Apurímac, we went out with a bang. Our final bit of rafting this morning was short, but boy was it sweet! And once it was all over, a refreshing cold shower, a nice farewell lunch, and a sleep-filled bus trip back to Cusco. If only every Friday was like this.

Our second day on the Río Apurímac was long, challenging, cold, and wild as hell. Today we spent about 5 hours on the river, and we did quite a few of the higher-level class IV rapids. We had a few accidents (no injuries, thankfully) — as well as a few suicidal class V and VI rapids, that we had to get out and walk past — but mostly, we just had a blast. And with everyone screaming "Y'Allah!", the day went by pretty fast, too.

One of the seasoned staff at Mayuc, Santiago is the instructor on my 6-person raft, for my three days on the Río Apurímac. He's a very cheerful guy, always cracking jokes and telling freaky stories. He's also a strict instructor, and (in our opinion) probably the best guide on the trip. We feel safe and lucky to have him. He also speaks excellent English, as well as a few token words of Hebrew (inevitable, given the number of Israelis around!).

At long last, today I finally embarked on my 3-day rafting trip on the Apurímac river, near Cusco. I've been itching to go rafting again, ever since my one-day trip on the Urubamba, which was almost six weeks ago. Once again, I've gone with Mayuc, the biggest and the best rafting agency in Cusco. Our first day on the Apurímac was just an introductory day: but already, it's been a blast, and it's been wild!