At long last, today I finally embarked on my 3-day rafting trip on the Apurímac river, near Cusco. I've been itching to go rafting again, ever since my one-day trip on the Urubamba, which was almost six weeks ago. Once again, I've gone with Mayuc, the biggest and the best rafting agency in Cusco. Our first day on the Apurímac was just an introductory day: but already, it's been a blast, and it's been wild!

We left Cusco at 9am this morning, and after a long and bumpy bus ride (with a stop at one little town along the way), we finally reached our starting point on the Río Apurímac at about 2pm. We're a group of about 24, of whom 19 are Israelis! Absolutely crazy: when it comes to the extreme adventure stuff, they've completely taken over this continent. The "others" were myself, two English lads, and two Danish girls. We also have four instructors (with six of us in a raft, that's one for each raft), two cargo-raft drivers (for our two cargo rafts), and three safety kayakers. 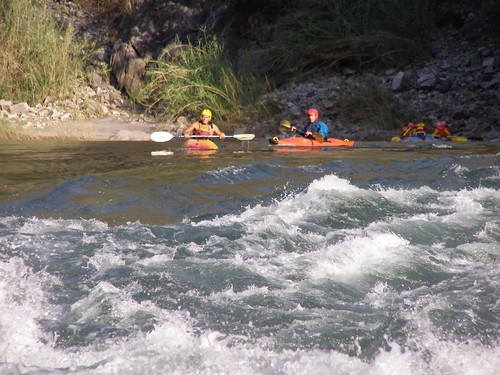 After a nice big lunch this afternoon, we got decked out with our wetsuits, life jackets, helmets and paddles; we put all our clothes and other items in waterproof dry-bags; and we were off.

Today's rafting was just a few hours of introductory stuff. Our instructor, Santiago, went through all the various rafting commands with us — e.g. "forward", "backward", "left / right back" (used for sharp turning), "jump to the left / right" (used when in danger of flipping), and "get down / positions" (used when going through really rough bits) — which I already knew reasonably well, from my last trip. Santiago also flipped the raft on purpose, in quiet waters, and we had to practice flipping it back, and getting back in after falling out. That was a cold, cold exercise! 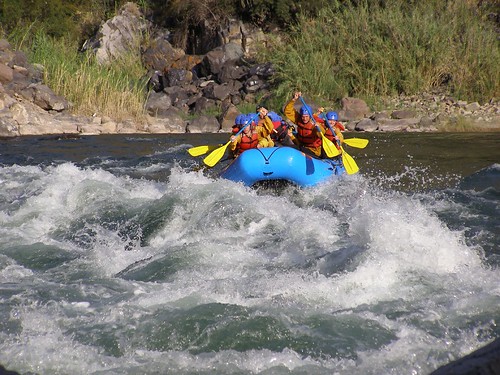 We covered a few mild rapids this afternoon — Class II, nothing more — and then we landed at the beach that was our campsite for tonight. We set up our tents; changed into some drier clothes; enjoyed a big, delicious dinner; and then schmoozed around a cozy campfire. When we got sick of all the Hebrew, we went to bed. 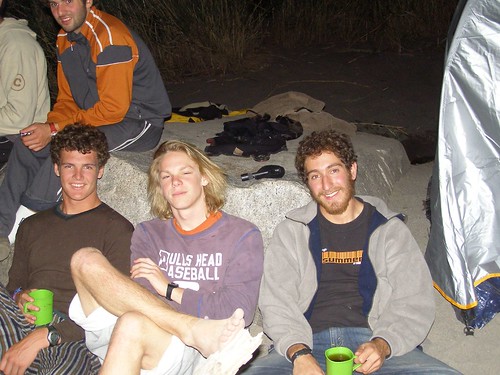 Myself and the two British boys relaxing by the fire with a cuppa, surrounded by Israelis.