Our second day on the Río Apurímac was long, challenging, cold, and wild as hell. Today we spent about 5 hours on the river, and we did quite a few of the higher-level class IV rapids. We had a few accidents (no injuries, thankfully) — as well as a few suicidal class V and VI rapids, that we had to get out and walk past — but mostly, we just had a blast. And with everyone screaming "Y'Allah!", the day went by pretty fast, too.

The morning's affairs were pretty standard: pack up camp; eat breakfast; get geared up; and jump in the rafts. We were on the river by about 8:30am, and it was rapids all the way, from there until lunch. 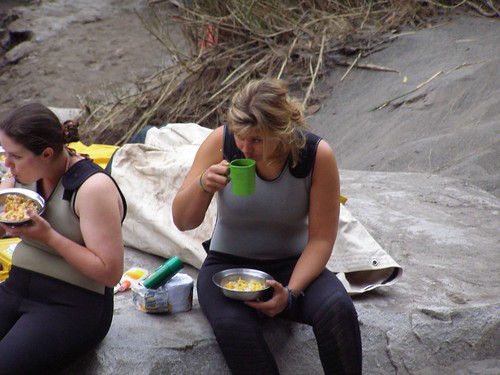 Most of the rapids today were class IV, which is pretty damn rough, but not quite suicidal. Most of the way, we had to follow Santiago's rapid commands promptly and efficiently, and we had to endure plenty of massive splashes, but it was mainly all fun and no problems. 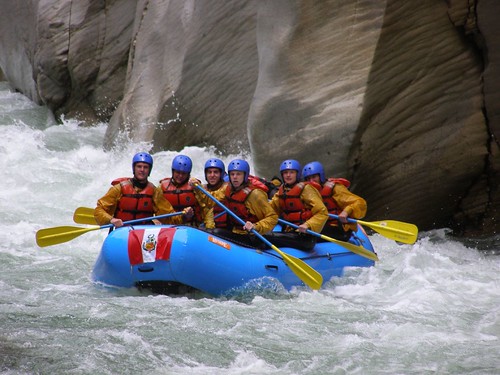 Blue team (my team!) taking on some class IV rapids.

However, for the two or three sections this morning that were class V or VI, we had to get out of the rafts, and walk along the edge of the river (through difficult rock labyrinths), until we were back in saner waters. While we walked, the instructors got the rafts through the rapids, often with the aid of tow-ropes, and often with not a small amount of difficulty. This wasn't so fun, but I guess it was better than getting killed in the crazy rapids.

Getting the rafts through the crazy rapids safely.

Our raft had almost reached the lunch spot, when we suddenly took a wrong turn into a small whirlpool, and our raft flipped. It wasn't even that difficult a section — only class III — but we approached it badly. Anyway, we all got flung out of the raft, and it took some time before everyone was rescued and back on board. No injuries, luckily, but Santiago was a bit annoyed at himself for letting it happen.

Lunch was a long affair of chicken, rice and salad, followed by a grand old soccer game on the beach. I was totally buggered, so I slept through the game; but I hear it was a heated match between us rafters (mostly Israelis) and the staff. 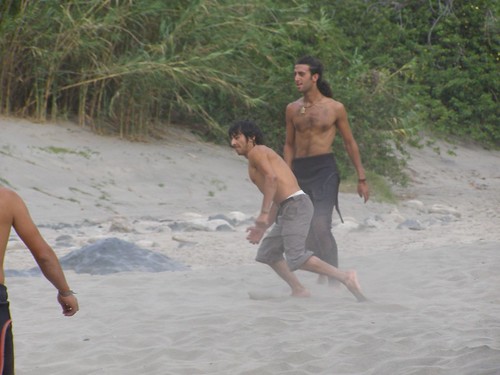 The afternoon rafting was much shorter and more tranquil, but we still had a few fun rapids, which we all got through fine. We reached the night's camping spot pretty early — about 4pm — which gave us plenty of time to once again set up camp, schmooze around, eat dinner, and tuck in for the night.

Also, by the end of today, the plague of mosquitoes was really starting to get to all of us. The Apurímac valley has the fiercest mozzies I've encountered anywhere on my trip so far, and even with copious amounts of DET repellent, there's no stopping the bastards. By now, we're all completely covered in massive bites. Definitely not the most fun part of this trip. Anyway, despite the mozzies, we're still having a totally awesome time down here.