For our third and final day of rafting on the Río Apurímac, we went out with a bang. Our final bit of rafting this morning was short, but boy was it sweet! And once it was all over, a refreshing cold shower, a nice farewell lunch, and a sleep-filled bus trip back to Cusco. If only every Friday was like this.

After setting off this morning, we had several quite fun, quite technical class IV rapids to crash through. There were a few people overboard in the other rafts; but for our raft, Santiago kept us safely on board (if holding on for dear life!). Definitely some of the wettest and the most fun rapids that we did on this trip. 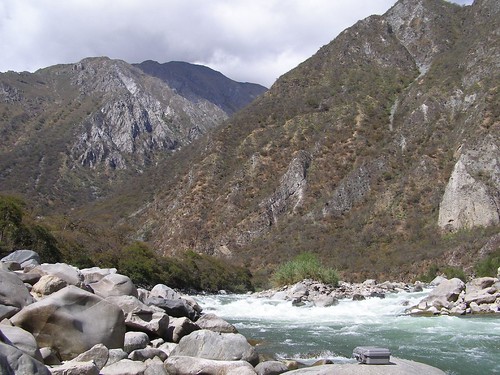 Rapids of the third day.

Sadly, this morning's route also had 2 more of those impossible class VI rapids; so once again, we had to get out and walk along the rock-infested shore, until we were past them. In the second of these sections, the guides had severe difficulty getting one of the cargo rafts through the rapids: it took them about ½ an hour to get the damn thing out of a dead-end pool, that it got stuck in halfway through.

In this same section, there was also no easy way for us to get back in the boats on the other side. We ended up having to jump off the rocks, with a drop of about 5 metres to the water below. This was pretty scary, but we all managed it fine; and once we were in the water, we managed to clamber back into the rafts, and to continue on our merry way.

Unlike with yesterday — where it was overcast most of the day — today we enjoyed some fabulous sunshine. This not only made things much warmer and more bearable; it also very much improved the views of the steep, imposing valley walls that surrounded us. With the river, the cliffs, and the rocks all around, it really was quite breathtaking scenery. Of course, we could only sit back and enjoy it in the calm sections, when we weren't paddling for our lives.

Finally, before the end of the trip, we got to tackle a real class V rapids section. It was really fast, really scary, and really wet — but it's something I'll never forget. We almost got through the whole thing unscathed: and then the raft tipped precariously, and almost flipped; and half of us (including myself) fell out. I lost one sandal (I got it back about ½ an hour later), but was otherwise fine.

We reached the end of the rafting at about 11:30am. Once back on shore, we had to help to carry all the rafts up to the truck, and to get changed and showered (cold, but nice). We also had to say goodbye to the instructors straight away, as they were all heading straight back to the start of the river route, to immediately do another three days' rafting, with a massive group of 60 people (most of them more Israelis, I assume). 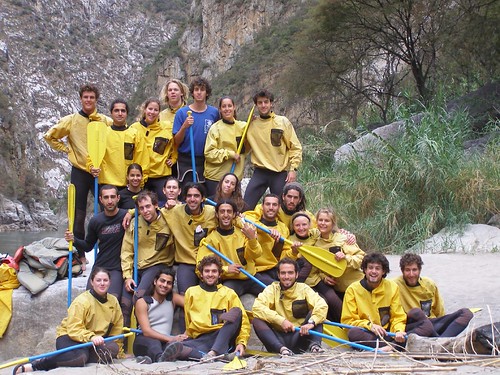 The Apurímac crew, finished at last.

At the end of the river, we found a great little restaurant / shelter at our disposal, where we were treated to one grande finale of a lunch. It was nice to sit down and schmooze with all the Israelis one last time, and to have a good, well-deserved tuck-in. Then, it was a 2-3 hour sleep-filled bus ride back to Cusco.

Positively ripper trip. I've done some crazy, adrenaline-filled things in my time — but three days of white-water river rafting has gotta top the lot. I wonder where I'll go rafting next?!