I was born there. No I wasn't, actually: I just felt like saying that. The last time I was in San Francisco was almost 7 years ago, and it's even more beautiful than I remember it. So much greenness, so much hilliness, and such a beautiful bay and bridge! This time, I spent a good 7 nights in the city, with 3 days being spent relaxing and cycling, and the other 4 days being spent at DrupalCon, down in lovely Sunnyvale. 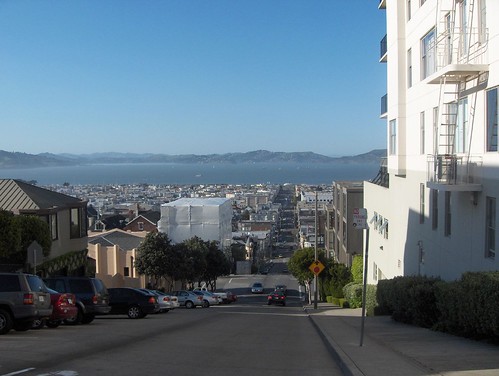 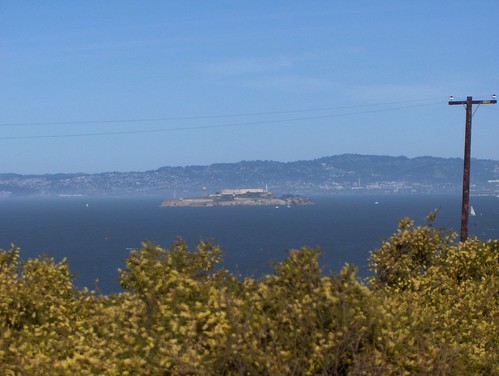 Forbidding Alcatraz: I’ll get there… one day. 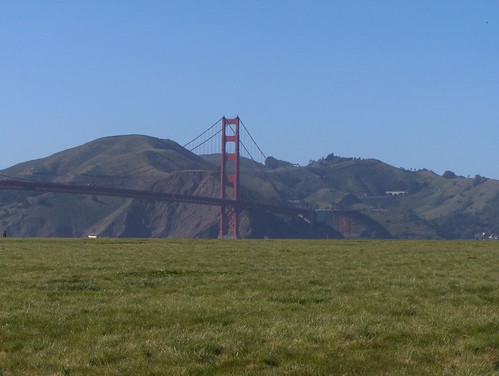 Golden Gate bridge: even nicer than the bridge I got me back home.

Tonight I spent the night at what I shall now dub the "San Francisco Airport hotel suites". I was in between flights — I arrived here from Vancouver at about 8pm tonight, and my flight the next morning to Miami boarded at about 6am — so I didn't want to bother finding a place to stay for the night, or even to bother leaving the airport and coming back again so soon. So I found what seems to be the unofficial place to spend the night at SFO.

Steven bought this while we were waiting for our flight to Vancouver, in the terminal at San Francisco airport. It looks like a diluted kind of orange-juice drink, but it proudly proclaims on the label: "contains no juice". Wow, a drink with no juice — just what I was looking for! No juice at all, eh? That's pretty extreme: even more so than, for example, "may contain traces of juice". I tell you what: I'm leaving this crazy country real soon, but it's not soon enough.

599 is one flight number that I'm not going to forget for a long time. My flight from San Francisco to Vancouver was meant to leave at 12:25pm today. After boarding one aircraft, getting kicked off it and being sent back into the terminal, waiting for a long time, and boarding a second aircraft, we finally took off just after 7pm. So instead of arriving in Vancouver by 3pm, as I originally intended, I was out of the airport by about 9:30pm. This must have been the longest "express" flight from SF to Vancouver known to mankind. It was a long and boring day.

This morning was not only a hectic rush, but also a major pain in the behind. After a hurried breakfast, I power-walked from The Green Tortoise, down to my friend at Millenium Technical Services, who needed my hired laptop back today. MTS didn't open until 9:30am, and I had to be back at the Tortoise at 10am, to catch my shuttle to the airport, so that I could catch my plane to Vancouver, which was scheduled to fly out at 12:25pm. All went well in terms of timing: I made it to MTS; I gave the laptop back; and I made it back to the Tortoise in time to catch the shuttle. The only bad thing that came out of this morning's activities was a Wells Fargo cheque for USD$300.

I already knew that the whole world is Jewish; but what I didn't know is that the whole world also has Jewish connections in East Lindfield, Sydney, Australia. I was sitting on the Caltrain back to San Francisco (from Sunnyvale) this evening, and I couldn't help but overhear a girl nearby talking about how she's Jewish, and about how she's got family in Australia. When I went over and talked to her, I discovered that as well as this, she's also the first cousin of Debbie and Benny Geyer, who are old family friends of mine, and who have lived around the corner from me for a good part of my life.

Taking it easy at the Green Tortoise

Wasn't feeling too good today. Crap in my throat, could barely talk, and quite tired. Must have been the oversupply of meeting and greeting and drinking, and the shortage of sleep, that I experienced over the past two days at DrupalCon. The weather was also rather unspectacular today. So I just took it easy at the Green Tortoise here in SF, drank lots of tea, and spent most of the day using the free Wi-Fi here to update this blog.

When I say that I was in the park, it can only mean one thing. For today's bike ride, I completed part of yesterday's route — along the Embarcadero to the GG bridge — and then I continued on to Golden Gate Park. Despite my efforts in searching around, I was unable to find a grassy clearing big enough to land a Klingon Bird of Prey on. But I'm sure there's a suitable spot in there somewhere. Maybe it's cloaked?

Well, now I've mailed stuff from the post office in Mexico, and I've mailed stuff from the post office here in the USA. The verdict: USPS is cheaper, easier, and more efficient. I just mailed my Mexican hammock and my runners back home, from here in San Francisco. About double the weight of the package that I mailed from San Cristóbal, and about 80% of the price (yes, mail-by-ship is an option here). And none of the box-and-packing rubbish that I had to go through in Mexico, either. I take my hat off to you, USPS.

While I was in Kaplan's — the place where I got my Army raincoat — I also got myself a pair of serious boots. These fellas are Carhartt, a brand that specialises in workwear and military-use gear. I think they were pretty much the best pair of boots in the shop: thick-soled, hard-skinned, and waterproof; and yet reasonably flexible and comfortable as well. Orthotics fit in them just fine.

Went down to Market St in SF today, and at the cheaper end, I found an awesome army-surplus-slash-cheap-outdoor-gear store called Kaplan's. Got myself a really big, quite ugly, and definitely waterproof poncho, which can cover me and my massive backpack with its vomit-coloured Army-camo protection. For $10, I'm very happy with my purchase, which should keep me dry even in the wettest and most remote corners of South America.