When I say that I was in the park, it can only mean one thing. For today's bike ride, I completed part of yesterday's route — along the Embarcadero to the GG bridge — and then I continued on to Golden Gate Park. Despite my efforts in searching around, I was unable to find a grassy clearing big enough to land a Klingon Bird of Prey on. But I'm sure there's a suitable spot in there somewhere. Maybe it's cloaked?

Golden Gate Park is pretty big, and there's all sorts of stuff inside it. There are big museums, monuments, and carefully manicured gardens. It's more of a botanical gardens kind of place than anything else. I didn't really have time to explore it all, but I rode through as much of it as I could. 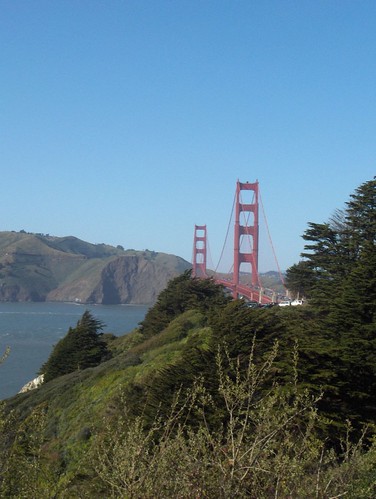 View of the GG bridge from the road down to Presidio.

Unlike in yesterday's ride, I remembered my camera today, and I got plenty of good shots along the way. Too many, in fact, because I spent a lot of time taking pictures, and this made me a bit late. I ended up only just making it back to the bike shop in Downtown SF in time for the 6pm deadline: if I'd been late, I would have had to pay a fair bit more.

Also rode up and down some really steep hills today, especially on my rushed way back to the bike shop (from GG Park). Going down them is fun, except that you have to brake quite hard all the way, since there's an intersection immediately at the bottom of every slope, and you always have to stop and give way. Going up them is damn near impossible: even in rock bottom gear (on a Trek mountain bike), one of them was just too much for me, and it utterly defeated me by about halfway up.

My two days of riding in San Francisco have been enormous fun: this is definitely the most bicycle-friendly part of the world I've ever been in, and it's been nice (if a little weird!) to actually be recognised as a valid member of the road system, and for drivers to actually notice that you exist, and to avoid running you over, for a change. If I ever lived around here, I'd be cycling everywhere, because it's just too good not to.