My 5-years-behind Lonely Planet guide describes it as sleepy, lacking in services, and very rough. From looking at it now, in 2007, it's relaxed, abrim with an ever-expanding number of services (e.g. Internet, banks), and becoming more comfortable by the day. In another 5 years' time, it will no doubt be a jam-packed tourist mecca, alive with adventurers and with every services they could possibly need. Rurrenabaque is Bolivia's jungle destination hotspot, and it's growing at an alarming rate. Get to it while it's still wild! 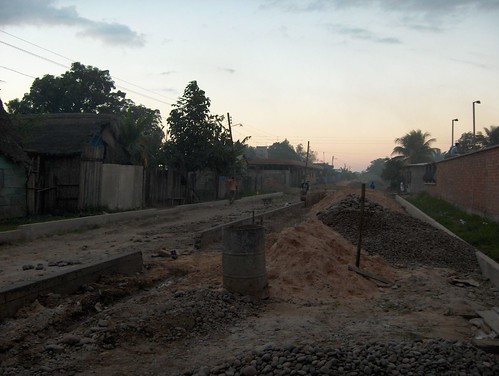 Dusty street (under construction) in Rurrenabaque.

After arriving in Rurrenabaque yesterday, Chris and I wasted no time in getting ourselves booked in for a three-day trip to the pampas (swampy grasslands), starting today. This morning, in a group of seven, and with one tourguide to show us where the hell to go, we were off. Our group consists of: Chris, Andrea, Anna, Marie, Matt, Dave, and myself. Today was a slow start to a great trip.

Andrea's a half-Macedonian, half-Dutch young Aussie girl, who comes from a place just down the road from me in Sydney: Mona Vale. She's been travelling round the world since the age of 17, she has a degree in film production, and she speaks a bit of Hebrew (because she had an Israeli boyfriend, and she visited Israel for a few weeks). I met her down in Rurrenabaque, and ended up doing three days of action-packed pampas touring with her.

Flight down to Rurrenabaque

After three days here, Chris and I have already had enough of La Paz: we're off to the jungle! Today, we hopped on a plane with Línea Aérea Amaszonas, and flew north to the town of Rurrenabaque. It was either a 50-minute flight, or a 20-hour bus ride on a very bad road. Seeing that we've already done the whole long-bumpy-dangerous-road-to-the-jungle thing in Peru, we opted for the former. In Rurrenabaque, we're going to go exploring the pampas and the jungle. Should be fun.