After arriving in Rurrenabaque yesterday, Chris and I wasted no time in getting ourselves booked in for a three-day trip to the pampas (swampy grasslands), starting today. This morning, in a group of seven, and with one tourguide to show us where the hell to go, we were off. Our group consists of: Chris, Andrea, Anna, Marie, Matt, Dave, and myself. Today was a slow start to a great trip.

Our tour began this morning in typical Bolivian style. Chris, Andrea and myself arrived at the office of Deep Rainforest, the tour agency with whom we'd booked our pampas trip. When we got there, the lady told us that the rest of our group had cancelled on us, and that we'd have to transfer to another agency. So she walked us over to the office of Flecha Tours, where we joined the group and the company that we actually went with. Apparently, it's completely common practice around here for one company to send a bunch of customers over to another agency, at 8am in the morning, and expect them to be put with a new group. Anyway, it worked.

After that, we had to endure the long, dusty, bumpy ride of three hours, in a crappy old 4x4 Land Cruiser, to actually get to the pampas. This wasn't much fun: most of us slept through it for a fair bit of the way. Not much to see along the way, either, except a dusty road ahead, and thick jungle on either side. But the journey did finally end, and we were given a nice lunch in the pampas, and then taken to the shore of the river, where we set off on our trip in a motorised canoe. 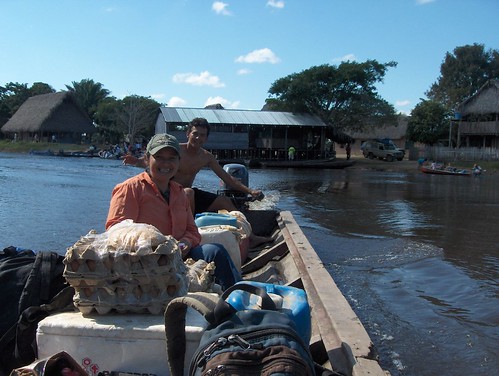 Sailing off from our launch point.

The pampas is basically a very lazy trip to undertake. There's almost no hiking. Pretty much the whole time, you're just sitting in the canoe, being driven up and down the river. That, or eating. And that's how the real part of our trip began: with another three hours of travelling, only this time on the water, heading upstream to our campsite for the evening. More relaxing, and more sleeping: but also some cool animal sightings.

The first animal encounter that we had was with an alligator and a wild pig / ant-eater. We were just cruising past a swampy stretch of the river, motor at full-blast, when we sighted these two fellas having a bit of a stand-off. For a while, it looked like things were going to get pretty ugly, and like only one of them could possibly come out alive; but in the end, I guess they both decided that victory was too uncertain, and that their hunger wasn't sufficiently great, because they just walked away from each other without so much as a graze. 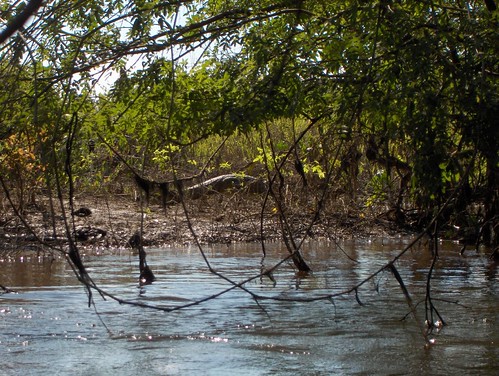 Vicious animal stand-off in the pampas.

We also saw quite a lot of dolphins this afternoon, on our way down the river. The pampas around here is famous for its pink river dolphins, which spout water up into the air magnificently, and which are known to give you a friendly, almost toothless bite or two if you jump in and swim with them. They're quite shy: you really have to watch out for them, and once they pop up in one spot, they'll quickly and silently move somewhere else. Getting photos of them, therefore, is a real challenge. But I managed a few.

Pink dolphins in the river.

The pampas is absolutely rife with birdlife: because its so low and wet (and flat), its a veritable paradise for them. I'm not a huge fan of birds; but the ones around here are quite impressive. Didn't manage to aim well enough to $&%? on us, either :P. 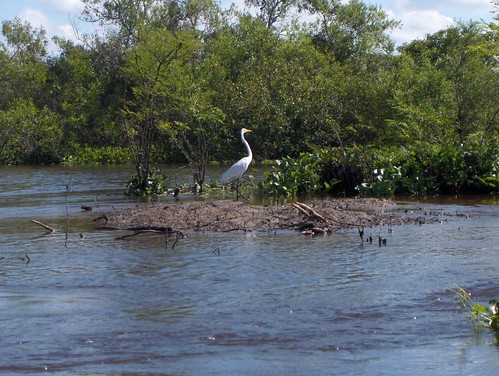 Finally, just before we got to our campsite, we spotted a family of little monkeys, swinging among the trees on the riverbank. These guys were very cute — they looked a bit like my friend in Pilcopata, but with less confidence in humans, and with a bit of yellow striping — and they were more than happy to swing down to boat level, and to snatch a few scraps of food from us.

Monkeys looking down on us from the trees. 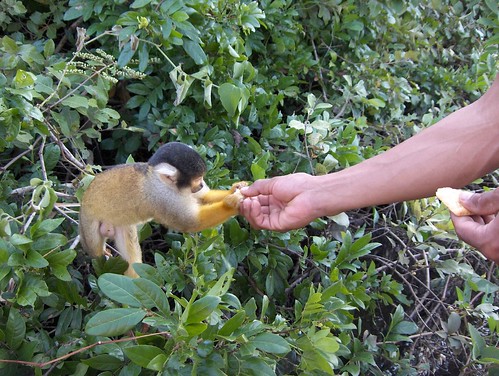 The pampas is such a popular tour destination in the Rurrenabaque area (more so than the actual jungle!), mainly because it's so well-known for having a huge abundance of easy-to-sight animals. The reason for this is that there's one big river going through the whole area, and so all the animals come down to the river constantly, to drink and to find nourishment. Therefore, all you have to do is cruise down the river on a canoe, and from the comfort of your boat, you can witness everything that the area has to offer.