Flight down to Rurrenabaque

After three days here, Chris and I have already had enough of La Paz: we're off to the jungle! Today, we hopped on a plane with Línea Aérea Amaszonas, and flew north to the town of Rurrenabaque. It was either a 50-minute flight, or a 20-hour bus ride on a very bad road. Seeing that we've already done the whole long-bumpy-dangerous-road-to-the-jungle thing in Peru, we opted for the former. In Rurrenabaque, we're going to go exploring the pampas and the jungle. Should be fun. 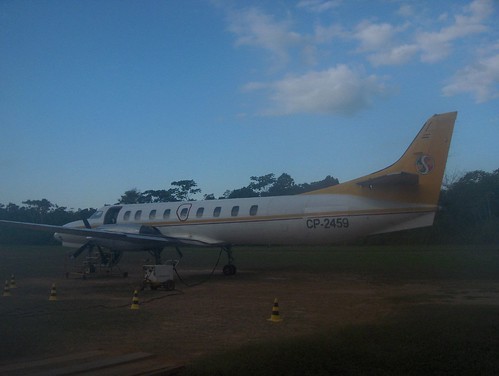 Our plane, after landing in Rurrenabaque.

Our flight left pretty much on time, by Bolivian standards. The flight was scheduled to leave at 12:15pm. When we arrived at La Paz airport, at about 11:45am, we were told not to rush, as the plane was delayed until about 3pm. The airport was full of tourists, hanging around and waiting to fly to the jungle: all the flights for the day were delayed. So we had some lunch (all they had at the airport was Burger King — in Bolivia!), did some reading, and went and used the overpriced Internet for a bit. We ended up taking off at about 4pm.

Turns out that we did well to get down to Rurrenabaque at all today: they had 4 full flights scheduled to fly, and only one ended up actually flying at all (not sure if it really was "ours" or not — but it was the one we were on). A lot of people had been sitting in the airport since 8am, waiting to go; and then they just got turned away in the end, and told to come back tomorrow. Great customer service they have in this country. No free food or drinks while you wait, either, of course.

The flight itself went without incident: we flew out of the altiplano upon which La Paz sits; we went over some massive snow-capped mountains; and the rest of the flight was just flying over an endless sprawl of lush jungle and lazy lowland rivers. Getting to "Rurrenabaque airport" was good fun: the airport consists of a dirt strip, and a little hut to sit in while you wait for your plane. Not exactly cutting-edge: but hey, as long as the plane can more-or-less land there, I don't care. Sure as hell beats getting the bus down.

When we got out of the plane in Rurrenabaque, my lungs almost died from exaltation. But instead, they just threw a party. So much oxygen! I'd forgotten what it's like to have a decent amount of the stuff available, for your breathing pleasure. Big change from La Paz. The heat and the humidity also hit me like a baseball bat in the groin: pretty big contrast from the highland climate that I've gotten used to of late.