River rafting on the Urubamba

I did river rafting for the first time today, and it was fun. Very fun. A big group of us went down to the lower reaches of the Urubamba River, near Cusco, and spent about 2½ hours braving the cold, fierce rapids. Tumbling along the river, mounting and crashing into churning waves, dodging scary rocks, and being so cold you can't feel your hands, is an experience like no other.

The company to look for in Cusco, for river rafting, is Mayuc. If you go somewhere else — like I did — then they just take a small cut, and they book you in with Mayuc anyway. Mayuc is extremely popular: they have one- and two-day rafting trips, from Cusco, seven days a week. 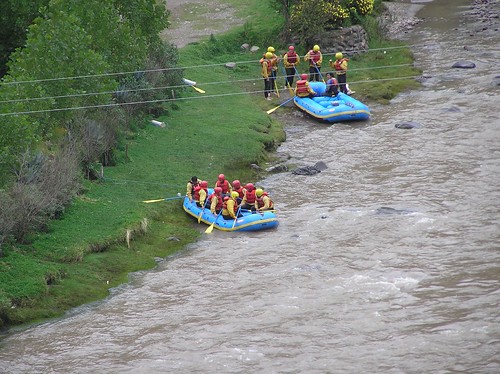 Setting off on the Urubamba.

Today, about 25 of us got a bus for 2 hours (each way), from Cusco to the rafting site of Casa Cusi, on the Urubamba. Once there, we were divided into groups of about 6, and we were all given a wetsuit, a life jacket, a hard helmet, and a paddle. Each group of 6 was taken to a raft, and had an instructor who explained the basics of rafting, and who came out on the rafts with us. 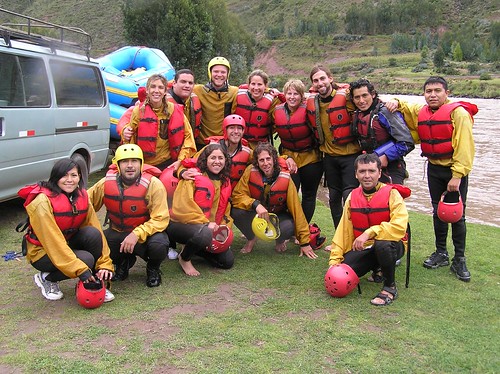 My group consisted of 4 Aussies (myself included), an American, and an Israeli. Our guide was a fearless local guy named Javier. A few people in the group had been rafting once before; but others (like me) had no experience. Anyway, our group was doing the level II and III rapids, which are considered easy enough for first-time beginners.

The 2½ hours on the river were totally goddamn exhilirating. The water was fierce. Often, we would slide about 1m down a wave, and crash head-first into another wave, making the boat shudder, and making everyone soaked in water. We were jumping and rocking through actual rapids for almost the entire time, with only small breaks now and then, in slightly calmer sections. 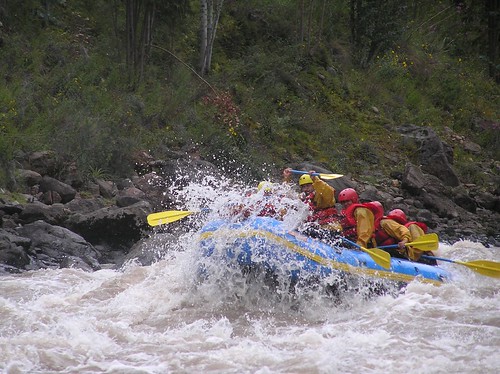 Well, I guess a picture explains what it was like better than words. :P

Nobody in our raft fell out, but one guy in the raft next to us did. However, everyone got wet, especially the two people at the front. If you want to get the most water, and the most terror, then stay at the front. Our group rotated a few times, so that everyone got a chance to go front, middle, and back. The instructor always stays at the very back. 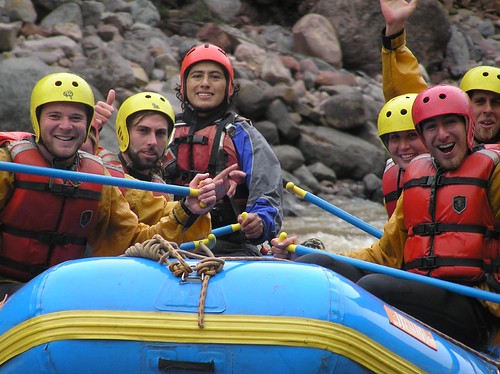 Our group having fun on the rapids.

I think that the Urubamba is freezing at the best of times; but for us it was particularly so, because we also picked a cold and cloudy day to go rafting. The wetsuits were an enormous help in keeping us warm and insulated; but even so, we were all pretty much frozen solid by the time we were done.

That's why we were all so happy to get out of the river, and into the sauna! Yep, that's right: Casa Cusi has a sauna, built especially for the survivors of cold rafting trips. Needless to say, everyone went straight into the sauna when we finished, and it felt absolutely divine. Sauna was followed by shower, nice lunch, and a bus trip back to Cusco.

Note: the photos in this blog entry were taken by a professional photographer (who was kayaking next to us the whole time), and were purchased after the event.

Now you are really having fun. Liam and Sam will be very envious of this activity when they read it. nice pix too!