Not much to report about the majority of today's riding, as it was fairly uneventful. This morning I rode east (and slightly north) from Agrigento, headed inland and slightly into the mountains. I intended to take the highway directly to the inland city of Caltanissetta: but the signs out of Agrigento were a bit confusing, and I ended up instead taking a lesser route, which detoured through the town of Favara. Not to worry: I found the main highway soon enough; and it was a small and scenic (and less heavy-in-traffic) detour. The rest of the way to Caltanissetta — on the SS640 the whole way — was incredibly boring. I shouldn't complain, as the good-quality road, the tail wind, and the fair weather helped me eat up plenty of distance. But seriously: the boring (and rather arid and ugly) countryside, the lack of towns or buildings, and the repetitive (if gentle) ups and downs, combined to make this one of the most uneventful legs of my ride so far.

The only thing that broke the monotony of the ride, was a lone bar on the side of the highway — at around 11:30am, it was the only single bar that I encountered, anywhere on the long road between Favara and Caltanissetta. Usually, it's quite a struggle to choose where to have the morning coffee break, as it's generally difficult to ride for more than an hour without encountering at least one town; and even the smallest towns inevitably offer a minimum of 5 such venues to choose from (especially on a weekday morning, when everything in town is open). But apparently, the countryside around here is not only dry and dull, but also much less heavily-inhabited than other parts of Sicily — even the isolated Nebrodi and Madonie mountain areas have more villages. Anyway, at least I found one bar, and at least they were able to satisfy my simple daily requirement of hot choc and croissant. 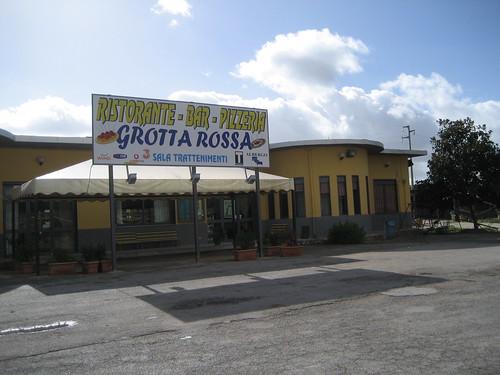 Bar en route to Caltanissetta: don’t miss it, cause there ain’t no others.

Once I finally conquered the endless SS640, I found myself a little bit lost in navigating my way through Caltanissetta. As with riding out of Agrigento this morning, it seems that in the Caltanissetta area, they're also somewhat challenged when it comes to clear and accurate signage. I wanted to continue straight on to the town of Pietraperzia: there's an express road that cuts straight across the southern edge of Caltanissetta, to join you up with the highway continuing to Pietraperzia; but the signs directed me to turn before I reached this road, and instead to make my way through the confusing back streets of the city's south. At one point, I even ended up stuck in a dead-end carpark for a block of apartments; and another time, I resorted to asking a local for directions. Anyway, in the end I made it back onto the main drag, and the signs were once again directing me towards Pietraperzia on highway-grade road.

I managed to avoid going through Caltanissetta proper — and from what I saw of the city, I don't think I was missing much. The southern edge of the city, at least, is little more than a sprawl of industrial parks, dodgy-looking ugly apartment blocks, and small urban ghettos. Not the kind of place I fancied hanging around for too long. Maybe the city centre is nicer, and has something to offer (although I haven't heard about any attractions there) — anyway, I didn't bother to go and find out. I just continued on riding east.

The road from Caltanissetta to Pietraperzia isn't all that long; but boy, is it a tough one. It's absolutely lovely at first: almost 5 k's straight of pure, straight, downhill goodness — I think I got more speed on this bit, than I've gotten at any other time so far in Sicily. However, the trouble with a big long downhill, is that it's generally followed by a big long uphill; and this was no exception. The rest of the way to Pietraperzia, I was pedalling double-time. The scenery continued to be dull around here; and the weather remained good, except that the wind got slightly foul in some parts. I made it to Pietraperzia — a nice little town, if rather dead — but 2pm, in time to relax after the uphill slog, and to fill my stomach up with some lunch. 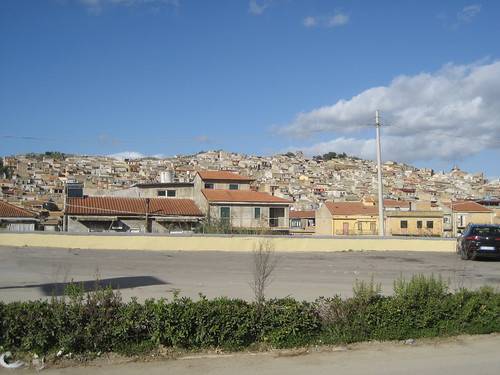