After a boring morning's ride, I continued east from Pietraperzia this afternoon, towards the town of Piazza Armerina. The weather continued to be fine, and the terrain remained largely unchallenging; but otherwise, the afternoon ride was in stark contrast with the rest of the day's trip. Gorgeous scenery this afternoon: the whole way, the countryside was peppered with green, fertile farms, that blanketed the gently rolling hills of the area. And just short of Piazza Armerina, I reached the big attraction of this part of Sicily (and one of the biggest attractions in all of Sicily), and the reason for my taking the longer inland route through this region in the first place: Villa Romana, the ruined Roman mansion of two thousand years' antiquity, and home of one of Europe's largest and finest works of tiled mosaic art. 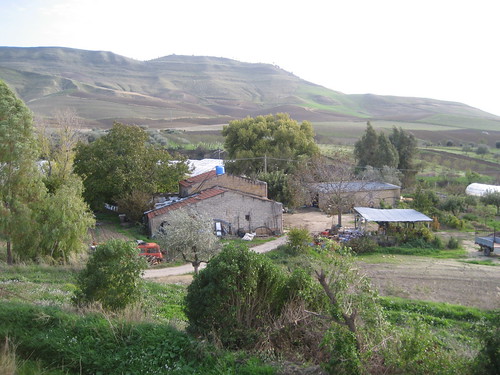 Since it's such a long way from Agrigento to Piazza Armerina, I wasn't counting on completing the journey in one day. However, I'd make such good progress today, that I decided I should easily have enough time to check out Villa Romana this afternoon, and to find a camping spot around Piazza Armerina after that. As it turned out, I was actually cutting it quite fine: I busted my gut on the road out of Pietraperzia; and with my best efforts, I made it to Villa Romana at the rather late hour of 4pm. When I arrived, I hurriedly locked my bike up, bought an entry ticket, and zipped in. Just when the majority of the day's tourists (and there seemed to be quite a few) were making their way out.

I had about ½ an hour to explore the villa, and this proved to be adequate; although more would have been better. When you first enter the archaeological site, you're greeted by a charming garden path, and then by the ruins that constitute the outer remains of the villa. The garden and the exterior walls are grand — but they're a very modest introduction to the splendour and beauty that awaits you inside. 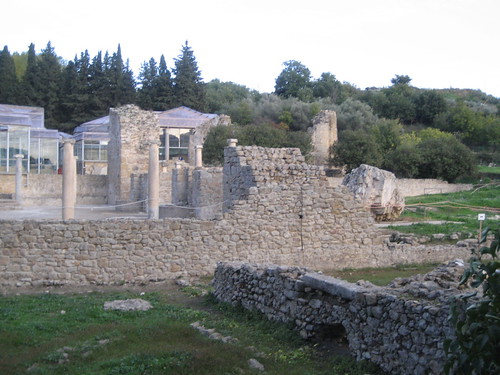 Outside of the villa.

Once you get inside the villa, you find yourself on an extensive network of metal catwalks, that funnel their way through the various rooms of the site, and that are raised about 1½m from the floor. Most of the rooms are also housed with thick glass roofs (as the original roofing is long gone), to protect the valuable floors inside from the elements. And yes: it's the floors that are the subject of interest in here — because that's where the tiled mosaics are.

The mosaics at Villa Romana are truly magnificent. I'm not much of an art fan myself — I avoid art galleries whenever possible (arguably making Italy the world's least suitable destination for me :P) — but even I couldn't help but marvel at the sheer amount of talent and effort that must have gone into crafting them. Most of the villa's floors are completely covered in the mosaic tiles, which — at around 2cm2 per tile — are exquisitely detailed. The mosaics depict all manner of things, from Roman G-ds and G-ddesses engaged in ceremony or in battle, to representations of jewels, animals and landscapes filled with old-world symbolism. Some are over 50m2 in size, and most are in excellent condition — due largely to the villa's being buried and protected by rock for centuries; and also due to the work of numerous curators and archaeologists, who can be seen brushing and re-painting the tiled floors every day. 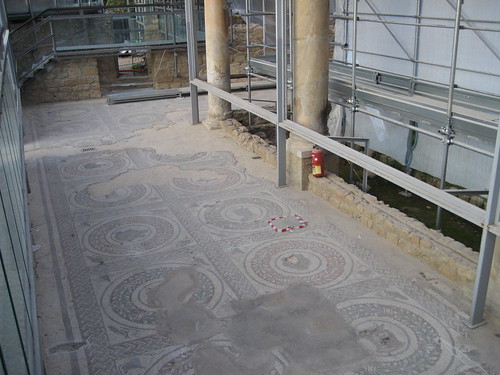 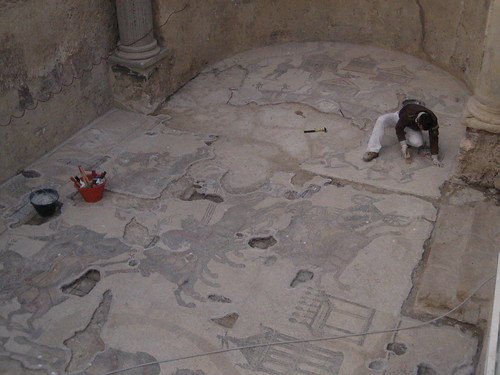 Curator working on a mosaic. 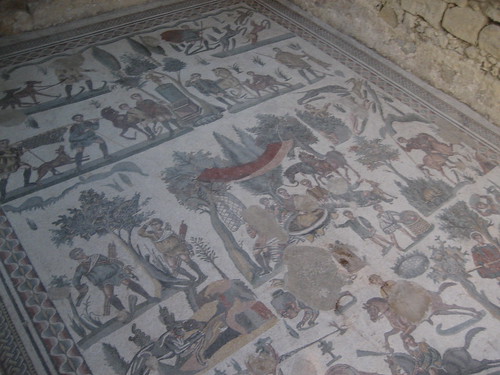 Dazzlingly beautiful, some of these mosaics are. 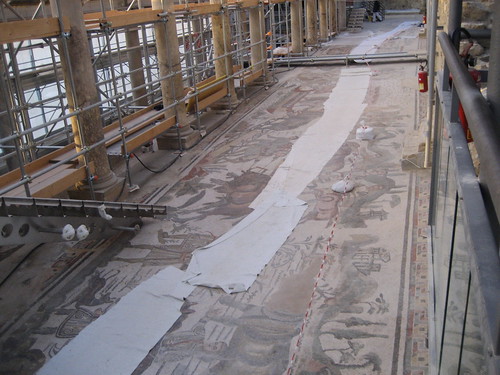 This long corridor holds the villa’s largest single mosaic (as it was late in the day, they were starting to pack up and to put protective sheets over the floors). 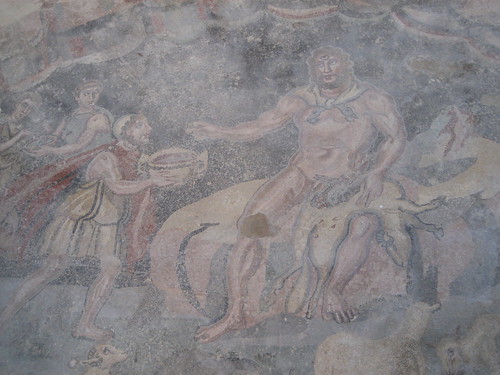 Mosaic of a dude with an animal over his knee, accepting some snacks from a servant. 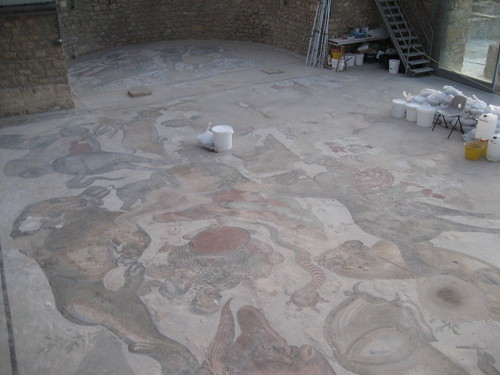 Mosaics going off into a rounded wall.

That's just a small selection of what the villa has to offer. As I was wandering through the place, I couldn't help but imagine what sort of wild and high-class parties the local Roman aristocracy must have thrown, during their summer vacations down here. As this villa was believed to have been built for, and (at least temporarily) inhabited by, one of the actual Emperors of ancient Rome, I imagine that none but the most important of feet would have been treading those delicately tiled floors. No doubt, as the night wore on, some senator or other would have engaged in grand and steamy orgies with the local slaves, atop those ornate mosaics — leaving the servants to clean up and scrub the mess off of them the next morning :P.

Anyway, I didn't have too much time to ponder these ancient things: as the day was growing late and cold, once I'd seen the majority of the mosaics, it was time to whiz out.