A piece of advice for anyone who's planning on shoving 160 US dollars inside their shoes, and on then hiking through mud and through small streams: don't do it. Today, a small misstep in a river crossing on the Salkantay hike ended up costing me much more than a pair of wet feet. Keeping money in your shoes may sound like a good idea, as a precaution against theft; but there are other ways to be robbed of money, apart from having it pulled out of your pocket.

It was a lovely morning today, on the third day of the Salkantay hike, and as far as I was concerned, everything was going well. We left last night's campsite of Challway at about 8pm, and we were headed towards the town of "La Playa" (strangely named, since it has no beach — apparently, a town on a river qualifies as a "beach town" around here), where we were to have lunch. We were more-or-less following the Rio Salkantay on our path, and as such, there were many mountain streams to be crossed along the way. Most of them presented no real problems. 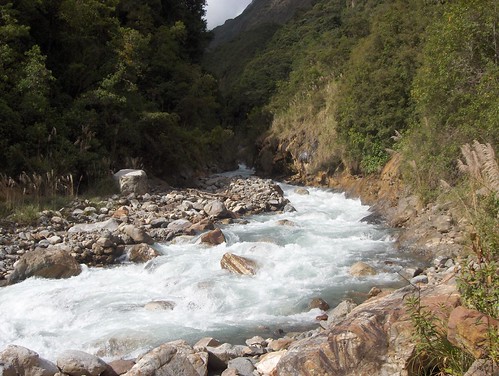 Beautiful path along the Rio Salkantay.

Then, I reached a stream that was a little bigger than the ones before it. When I got there, a group of locals and their horses were fording it, and didn't seem to be having any problems. So once they'd passed, I started to cross the stream myself.

I made it about ¾ of the way by rock-hopping, and then — slip! — suddenly I found myself almost knee-deep in the water; and for the first time, I felt my highly waterproof pair of serious boots flooding with liquid. I scrambled out to the other side, and then immediately thought: "Oh #$&%, my US dollars!".

I was a bit ahead of the rest of my group, so I had some time to stop and to assess (and to mitigate) the damage. I sat down and took off my boots. I extracted the precious dollars from under the soles (in my case, the soles being orthotics). As I feared, they were completely soaked, and were already starting to stick together. Not looking good. I aired them out a bit, then I put them inside a plastic bag in my backpack, and I put my boots back on.

I was just tying the final laces, when the rest of the group caught up to me.

"What happened to you?" they asked.

"I slipped in the stream, and my boots got soaked", I replied.

At first I thought they were joking. And if it wasn't for the money, I gotta admit, I would have been laughing too. But they were quite serious: about 5m upstream, there was a wooden bridge, clear as daylight. And everyone had crossed it, safe and dry, except me!

I guess I just didn't notice the bridge, because when I got there, the locals were all crossing at the ford with their horses — presumably because the bridge required too much tricky footwork for the horses to cross it safely. But in retrospect, the bridge was pretty obvious, and for the zillionth time in my life, I'm utterly blown away by the utter lack of perception that I seem to possess at times.

Anyway, when we reached La Playa, I took the wet dollar bills out again (and took off my still-soaked shoes and socks), and gave them some time to dry. I still wasn't exactly a happy chappy, but a few beers and some snacks lightened my spirits a bit. And just by looking at the poor soggy bills, arrayed out to dry, everyone else seemed to see the lighter side of it. 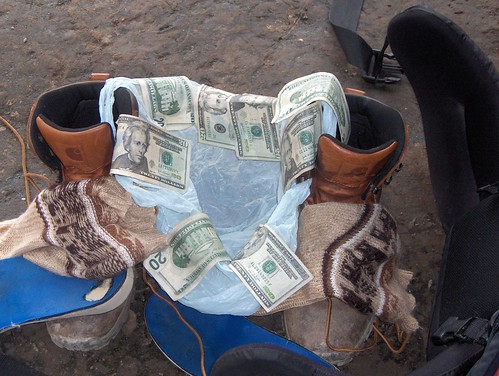 Well, that's the last time I'm keeping money in my shoes. If I ever was to store money there again, I would have less of it, and I'd put it inside a waterproof zip-lock bag. US dollars also probably aren't the best currency to keep in your shoes (despite being universally accepted in South America), as they're made of paper and are really quite fragile. Now, good ol' Aussie dollars, on the other hand: I know from first-hand experience that you can put them through the wash 5 times, and they'll still be perfect quality legal tender at the end of it. If only I'd had Aussie dollars in my shoes, all would have been fine.

Now all I have to do is somehow flog off my damaged dollars to some unsuspecting shopkeeper here in Peru. :P

‹ The longest day of Salkantay The truck, the landslide, and the singing ›
Filed in: Salkantay • Money • Hiking • Injury • Stupidity

how about staying one step behind the pack next hike?