The truck, the landslide, and the singing

This afternoon was the most relaxing part of the Salkantay hike; but it was also the most stressful so far, because we were hindered in our truck ride by a landslide, and because two groups' worth of us were piled into the back of a rickety pickup. However, we sang our way to our destination, the town of Santa Teresa, in the end. Hence, the story of the truck, the landslide, and the singing.

We were all grateful to hop into the truck, after our lunch at La Playa, since we were all buggered from 2½ days of hard walking. I was particularly ready for a break, after my encounter with a river this morning. So we all squeezed into the back of the truck, and held on tight as we began our journey down the bumpy road to Santa Teresa. But our journey ended abruptly, after only about 10 minutes of travelling. 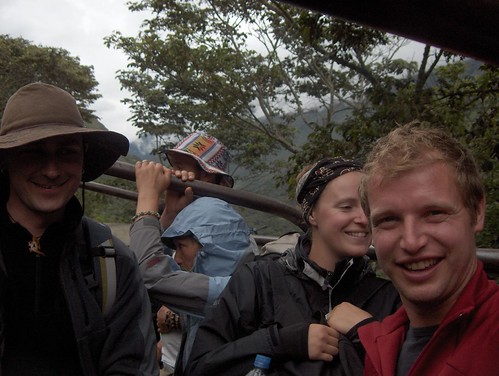 Well, technically, it wasn't our journey that ended. It was the road. A few metres ahead of us, the road made a premature finish; and where there should have been more road, and (the rest of) a mountainside, we instead saw lots of open space — all the way to the next ridge — and a sudden drop of about 200m. We'd hit a landside. 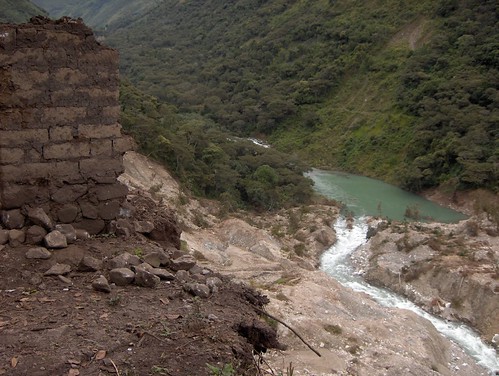 The road ahead: half a house, half a mountainside, and lots of dirt and rubble.

The ridiculous thing was that this landslide occurred over a week ago; and yet our guides claimed to have no knowledge of it. How could that be? I mean, c'mon: I know that the highlands of Peru are remote, and that communication is poor; but nonetheless, organised groups undertake the Salkantay hike every day. Do they think we were born yesterday, or something? Of course they knew about the landslide! They just didn't want to tell us they knew, in my opinion. Most probably, landslides occur in the path of the hike all the time; and if they cancelled the hike for all of them, they'd lose a lot of money. So they feign ignorance.

That's my theory, at any rate.

Anyway, they seemed to work out an alternate route quickly enough; luckily, the swallowed-up road was not the only way to Santa Teresa. So we were once again squeezed in the truck, and on our merry way along the road.

Along the way, we sang many songs to keep ourselves entertained. People were asked to sing their country's national song. The Belgians, the French, and the Swiss all sang songs in their native tongues. The guides and the porters sang us some Quechua songs. I declined singing "Waltzing Matilda", since everyone knows it already; instead, I sang a verse of "I still call Australia home". And my favourite was the Israelis, who sang the beautiful song "Od Yavo Shalom" (I joined in, of course).

And so, after trucking, land-sliding, and singing, we made it to Santa Teresa. We're camping here tonight, on a big patch of grass that's conveniently located next to the town pub. Sounds good to me: drink all evening, and sleep under the stars all night.