The longest day of Salkantay

There's one thing I can say about today, that really sums up the day's hiking: it was a bitch. We walked for almost 9 hours today. We left Soraypampa at 7:30am this morning, and the quicker people among us (myself included) didn't get to tonight's campsite of Challway until 5:30pm. The morning may have been hard, but the afternoon was long. It was one really long downhill slog, that just dragged on and on forever. Today really was not for the faint-hearted.

The really bad thing was that quite a few people didn't make it to Challway until after it got dark. These people had to make the final distance on a dirt path, with a sheer cliff on one side, in pitch dark — many without a flashlight. For these poor sods, the final stretch was actually quite dangerous. It was irresponsible of the guides, not to warn us that we might not make it before dark, and that we should all carry flashlights. One wrong move in those conditions, and someone could have been history. Luckily, everyone made it back in the end.

Although it was long and arduous, I must say that the rest of the day, post Paso Salkantay, had some really beautiful and varied scenery. We started by going downhill through some rocky, scrub-covered mountains. 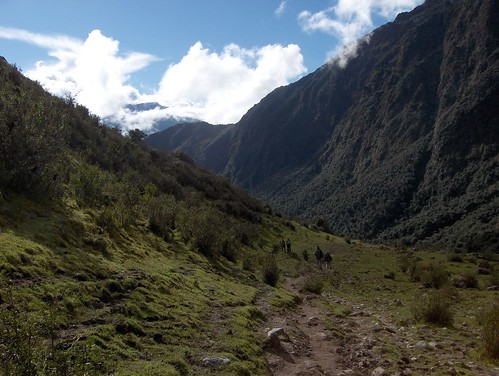 Then, we descended onto a big, swampy plateau, where we had lunch. And finally, as we continued descending after lunch, the mountainous terrain became lush jungle, with thick trees and scrub densely covering everything except the path, and with lively mountain streams pouring down the slopes at regular intervals. 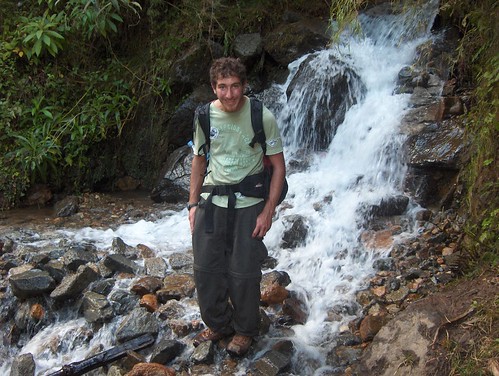 Jungle towards the end.