Christian is the last of (no less than) four people (or groups of people) with whom I've had a reunion in the past four days; of whom three were people that I met in South America. I met Christian while doing the Santa Cruz-Llanganuco hike in Peru, back in April. He lives in Wallonia (French-speaking Belgium) with his wife Nancy, and his two daughers Marine and Florine. I had a great time this evening, enjoying dinner with Christian and his family, and catching up on old times.

After the not-so-perfect goodbye to Annick and Stef, this afternoon I caught the train from Turnhout down to Liège. The trip was three hours, with one change in a small city somewhere in Flanders: I didn't really notice what I passed through along the way, as I was pretty tired, and still nursing my hangover from the big events of last night. I'd arranged to meet with Christian at 5pm this afternoon; but since I left Turnhout quite early, I pulled in to Liège station at the early hour of 3pm. I killed the extra time by grabbing some late lunch, and checking my e-mail at a café across from the station. There isn't much to see around the Liège station area, except that the station itself is currently being massively renovated: it's rather a mess now, but once it's finished it's clearly going to be enormous and impressive.

Christian picked me up at 5pm — as agreed — and I also met his elder daughter, Marine (13 years old), who was in the car with him. It was great seeing Christian again: he's really keen on the adventuring and the exploring, as well as being a very chatty guy and a big schmoozer. Christian speaks perfect English — I think he uses it a lot in his job, where he's a senior manager for the (customer service) call centre of an international company — but unfortunately, the rest of his family speaks zilch. We drove into the middle of town, where Christian (and Marine) gave me a quick tour of Liège's historic centre. Like everywhere I've been lately, Liège is a beautiful town that dates back to medieval times; and unsurprisingly, the locals are also keen on showing their Christmas spirit, with a big and festive market and with decorations everywhere.

We went exploring the Christmas market, which has many of the things that I'm becoming familiar with in such markets, and which also has several new and unique offerings on show. Like in Germany and Flanders, here in Wallonia they also drink Glühwein (which they call vin chaud, i.e. "hot wine"). But they have a specialty of their own around here, too: a thick paste made primarily from liver, which they spread over toast, and which is considered quite a delicacy. Apparently, it's held in such high regard that the French come up to Wallonia especially to sample it. The three of us shared a small slice of this "liver toast", which is quite expensive (the spread sells for €150/kg!), but which I must admit is quite divine.

It was something of a shock to my system, being back in the French-speaking world — especially since I've also had Flemish and German, just in the past week. I haven't been exposed to French since I spent three weeks in France, back in 2001 (which was also when I stopped studying it at high school). Plus, all my Spanish over the past year has basically pushed the French right out of my brain. I'm pretty rusty — I can barely string a sentence together en français, let alone carry on a conversation — but considering my short time here, it was hardly a problem.

After the market indulgences, we drove over to the Koch family house — which is about 15 minutes out of town (a long way by Belgian standards!), almost in the countryside — where I met the rest of the family. They're a great bunch: Christian's wife, Nancy, is a very laid-back and hospitable person; and the two girls are sweet and very cute. The family surprised me, by wanting to see my photos from the past few months — I pulled up a few of my Flickr sets as slideshows; and every time I finished one (thinking: "they must be bored stiff by now"), they insisted on seeing another. Christian also showed me some of his pics from back in Peru, which are quite nice as well. 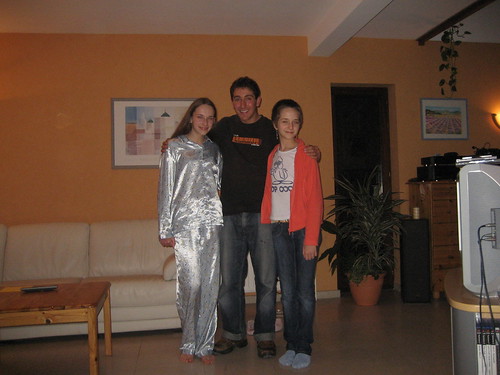 The family (mainly Nancy, actually) cooked up a delicious Sunday night dinner: we feasted on a massive roast — which apparently was a special extra-chunky "Belgian beef" — and which was served with a tasty dish of creamy baked potatoes. This being almost France, there was also (of course) plenty of vin rouge ("red wine") with dinner; and the fruit-and-cream dessert mix was simply delectable. They really spoiled me this evening!

What's more, I was originally going to head straight to Brussels this evening: but Christian insisted that I spend the night at his place; and Florine gave up her bedroom for me, and slept with her parents instead. It was a rainy Belgian night, but I slept like a log. Great family, and more hospitality than I could ever have asked for.