I've been very slack in my time so far in Cusco, because after 4 weeks here, I still haven't visited the Valle Sagrado ("Sacred Valley") at all. Lying about an hour north of Cusco (by public bus), and consisting of three principal towns — Pisac, Urubamba, and Ollantaytambo — it's one of the main tourist attractions in the area. This morning, I was planning to visit Pisac (and to continue on to Urubamba) on my own; but at the last minute, I ended up going with Jesus. We didn't quite make it up to the Inca Citadel, but we did have a colourful and relaxed morning at the markets.

Pisac's formidable markets are busiest and most gringo-fied on Sunday mornings, so there are more buses there from Cusco at this time than at most other times. This meant that Jesus and I only had to wait about 30 seconds for a bus at the bus stop — which is conveniently located on Av. Recoleta, not far from Amigos. Despite both of us being a bit knackered from a beverage- and disco-filled night out last night, we managed to meet and to catch the bus by about 9:30am. Not a bad effort at all, if I may say so.

Pisac is a charming old village, situated at the eastern end of the Valle Sagrado, and surrounded by stark mountains and lush countryside. Due to the markets and the nearby ruins, its beauty is (inevitably) a little bit marred by the masses of tourists; but by and large, the town really does retain a nice, traditional character. 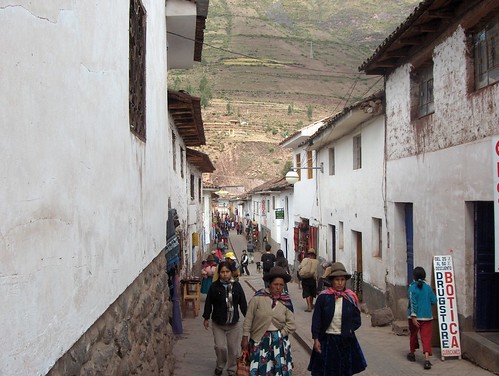 A street in Pisac.

This morning, the markets were a sprawling mass that occupied the entire main square of Pisac, and that spilled into the surrounding streets for several blocks in every direction. The first part of the markets that we saw was the food section, where you can find some prime local produce. The choclo (corn) in particular is most impressive, with various breeds of the crop (all of a different colour) all available in abundance. 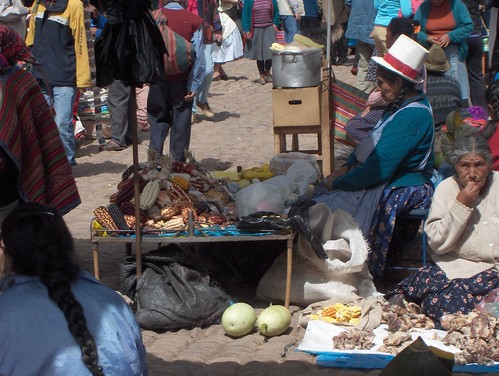 However, contrary to a market that's actually for the locals, the vast majority of the (Sunday) Pisac market is shmonsers and souvenirs. The hawkers here have everything you could possibly want, from alpaca jumpers to Incan statues, and from cheesy t-shirts to finely wrought jewellery. All overpriced for the gringos, of course; although by and large, all genuine and made locally (except don't believe them when they say it's made from baby alpaca).

Jesus and I wandered around the markets for a while, and I did a bit of shopping along the way. We also popped in to a trendy little café on the edge of the market, and enjoyed some delicious lemon cheesecake, coffee, and juice, over a game of chess. I haven't played for quite a while, and it was quite a close and competitive game, until I suddenly saw a surprise opportunity, and checkmated Jesus in one move. I fear that revenge is yet to come.

We were planning on trekking up to the Inca Citadel that overlooks the city. But the combination of two things — firstly, us not getting to the entrance to the trek until about 1pm; and secondly, the guy at the entrance refusing entrance to me because of my expired boleto turístico (hey, I had to try!), and to Jesus because of him forgetting his Cusco resident ID — resulted in us giving it a miss, and continuing on to Urubamba (via combi).