Deep in the mountains of south-eastern Sicily, there is a place of ancient and foreboding mystery. The place is called Pantálica: a giant necropolis consisting of thousands of tombs, in the form of body-sized holes cut into the sides of sheer cliffs and precipitous rocky overhangs; and constructed around 2,500 years ago by a civilisation that we know almost nothing about, and that has long since vanished from the face of the Earth. Pantálica would have to be one of the most bizarre, the most isolated, and the most disturbing places that I've visited on my world trip so far. Most fittingly, the necropolis can only be reached by one long and winding road, that stretches tenuously to the site and back again — the only way in, and also the only way out. This afternoon, I headed east from the village of Ferla, and boldly embarked upon this road. It was a strange and lonely journey: but I lived to tell the tale.

As well as being one of the most unique and ancient of archaeological sites in Sicily, Pantálica is also the key attraction of the rugged Monti Iblei — and it was to see Pantálica that I made the trek out here today. Pantálica lies about 12km's east of Ferla: and the only way to reach it, is by travelling along the road that follows the mountainous ridge from village to necropolis. The geography of Pantálica is very interesting, and also (appropriately) quite solitary: there is a ridge of mountains that extends east, from Ferla to the necropolis, and that is flanked on both sides by deep river valleys. The two valleys meet and cut off the ridge just after the necropolis, in effect making the ridge an inaccessible inland peninsula. Apart from achieving the effect of natural isolation, this geography is also quite beautiful. 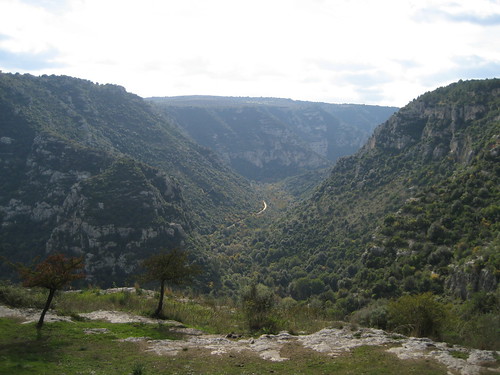 The valley that flanks the southern side of the ridge peninsula.

The ride along the ridge began by the road winding through stony farmlands — the part of the ridge near Ferla, it seems, is at least lightly populated, and has locals driving around and working in the fields. However, when you get closer to the "tip", the farmlands abruptly end, and are instead replaced by fences of wood or barbed-wire along the road, that are there to protect the untouched natural forest that still covers the eastern part of the peninsula. Apparently, the local farmers never settled the area around the necropolis itself — and I for one don't blame them, as I wouldn't want to live too close to it either. These days, the necropolis and the forest around it are all protected as National Park land, and are subject to laws that clearly restrict all but the most basic development around the site. 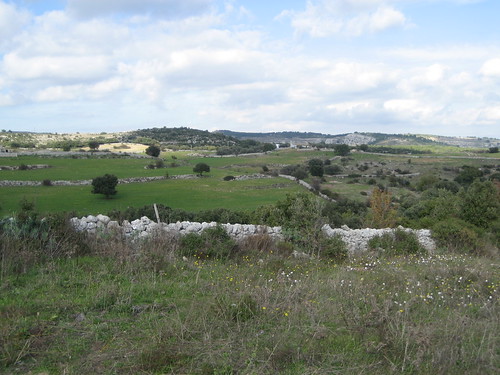 Farms can be seen closer to Ferla.

The road was a fairly easy 12km's — almost flat at the start, then gently downhill towards the end — to the start of the necropolis. Once in the area of Pantálica proper, I started exploring the various separate necropoli that make up the complex. Some of the necropoli are more striking than others: but basically, all of them consist of hundreds of small, black holes, bored into the sides of immense cliff walls — and due to the geography that I described above, there are no shortage of those. Apparently, virtually all of the holes contain the remains of a human corpse. 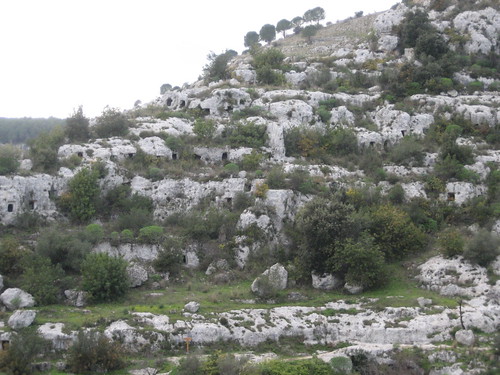 The most impressive of the sub-sites that I saw was one called "Necropoli della Cavetta". This one is reached by leaving the main road through the complex, and by walking along a very overgrown little mountain trail for 700m. I'm not sure if it's so overgrown all year round, of if they just neglect to maintain it outside of peak tourist season; but regardless, it was full of spiky plants and tall weeds when I walked it. Once you complete the trail, you reach a lookout, from which there is an amazing view of the tombs: it's absolutely insane how they're bored into the sides of vertical cliffs and rocky caves, with a sheer drop of 100m to a raging river below. 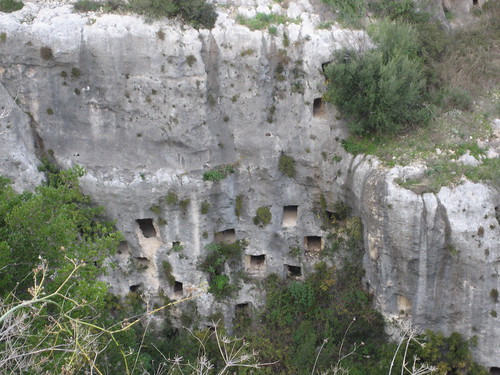 Tombs in the sheer cliffs at Necropoli della Cavetta. 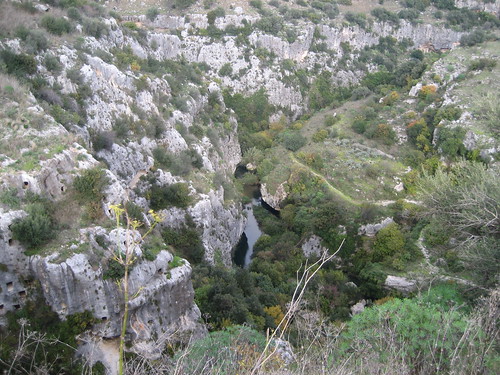 The cliffs plunging into a deep valley with a noisy river, directly below Necropoli della Cavetta.

As I gazed in awe at these bizarre tombs, I couldn't help but ask the same two questions that I assume every visitor here asks: why, and how? To tell the truth, I'm not so interested in the question of "why", in this case — I've seen so many "unanswerable" ruins around the world this year, that I'm starting to just take it "as a given" that all the peoples of the ancient world had very strange beliefs and ideas, and that there's no way to ascertain with any certainty what those ideas or their driving principles were. But as for the question of "how": seriously, how did they manage to reach a place that's halfway up a 200m vertical wall of rock, to bore a large hole at that place, and to then transport a human body into the hole? It must have been quite a feat of engineering — and even with the aid of whatever state-of-the-art techniques they had at the time, it still must have been a very dangerous operation. 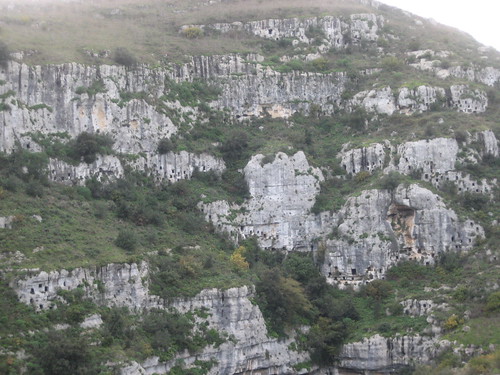 Large cliff-strwen hillside covered in tombs: there are several thousand tombs in the whole complex.

I was impressed, fascinated, and awe-struck by what I saw today at Pantálica. But more than any of these things, I was also quite freaked out by it all. In my opinion, Pantálica is first and foremost a really creepy place: the isolation, the emptiness, the bizarreness, and the mystery; all these factors combine to make the hairs on the back of your neck stand up, the entire time you're there. Perhaps it was the fact that I was almost completely alone there: after all, the only other people I saw, the entire time that I was on the ridge peninsula, was a German tourist couple (and even them I only saw briefly). Nevertheless, I don't consider myself someone who's easily scared — 2+ weeks of solo cycling and rough squatting haven't much fazed me — and this place crept up on me much worse than I expected a mere bunch of tombs could have.

The road back out of Pantálica was a little harder than getting in, as the section just near the tip itself is an uphill slog on the return journey. By the time I started heading back, I'd also worked out that there actually is a second road into Pantálica — across from the tip of the ridge, on the side north of the intersected valley, a road leads east to the town of Sortino. But the two roads aren't joined, and the only way to get from one to the other is by crossing the valley floor via a steep walking path. Anyway, it was all good: I made it back to Ferla by about 3:30pm, well before the onset of dark. And a very good thing that was, too: because there's nothing I would have enjoyed less, than getting stuck in Pantálica in the dark, and having to spend a night in the company of skeletons that have been living in holes in the sides of cliffs for the past two-and-a-half millennia.