Into the Monti Iblei

It was meant to happen yesterday afternoon; but due to technical difficulties, it happened today instead. This morning I jumped on my newly-repaired, newly-serviced bike, and headed west out of the city of Syracuse, into Sicily's Monti Iblei highlands. The day was kicked off with a fantastic B&B breakfast (I vote it "best breakfast I've had this year" — it was That Good™): the owner of Caravaggio — whose name is Mario — not only prepares an enormous and delicious spread; but he's also really friendly, quite fluent in English, and full of interesting things to talk about. Since I was expecting mountains today, I was pleasantly surprised by the first hour or so of the morning ride being flat and straight, through the town of Floridia, and all the way to Solarino. However, the mountains appeared in full force from Solarino onwards: it was a fairly tough slog ascending through the foothills; but once I was up, I was up — and once the scenery started getting good, it just kept getting better. 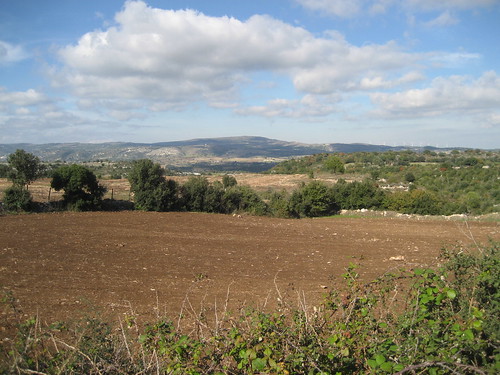 This morning's ride can be broken into three main stages: the flat ride west from Syracuse to Solarino; the uphill slog from Solarino into the Monti Iblei; and the relatively flat ride through the highlands of the Monti Iblei to the valley of Pantálica. Fortunately, I was blessed with fine weather all morning: bright skies and scattered clouds, but not so much heat that it made the uphill ride difficult. The scenery was fairly uninteresting until I'd finished ascending into the mountains; but once I finally reached the high areas, the rolling farmlands and spots of roaming cattle became quite pleasing to the eye. Also, for the entire morning's ride — from around Floridia onwards — there was almost no traffic, making for a nice peaceful ride. Apparently, the Monti Iblei are even more sparsely populated than other mountain ranges I've seen in Sicily — such as the Nebrodi and Le Madonie — and I'm about the only tourist visiting them at this time of year. Nice change from the busy coastal highways that I've been frequenting lately.

The main attraction of the Monti Iblei (apart from the wild highland scenery that they offer) is the Necropolis of Pantálica — and as such, I encountered signs the entire way, pointing me on to it. Not that the signs are needed for most of the journey, as there's only one main highway, and as you just keep following it. However, the signs started coming in handy, when I reached the turnoff that took me into the valley of Pantálica, and when I started heading towards the town of Ferla.

It was a lovely warm day today: but the minute I began the descent into the valley, I was confronted with an icy cold, which must be as a result of the valley trapping cold air and being shielded from direct sunlight. Anyway, this was my first of many introductions to the creepiness and freakiness of Pantálica. At the bottom of the valley, I rode through the official entrance to the National Park that encompasses the Pantálica area — and from here on, I started to get some gorgeous views of the steep cliffs that make up the valley wall, and of the pristine forest that carpets the cliffs and the valley floor. 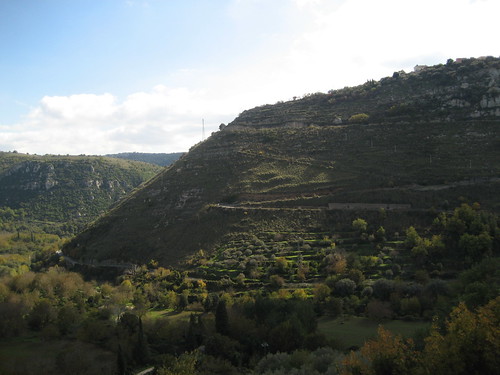 Winding cliff road into the valley. 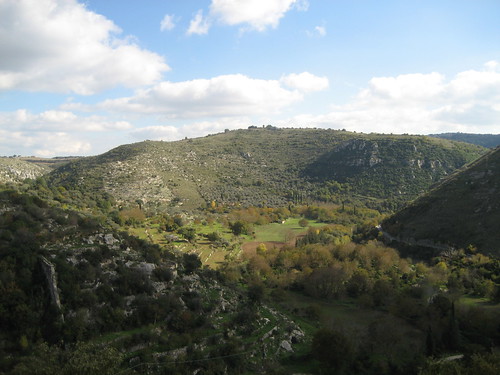 Once across the valley floor, I then had to climb back out of it, in order to reach the mountain village of Ferla — with Ferla being "the gateway to Pantálica". It was quite a hike, ascending up the winding cliff road: but it wasn't an excruciatingly long way up; and once at the top, I decided that it was time for a well-earned morning coffee break. So I pulled up at one of the bars on the main street of town, ordered the usual, and enjoyed some pleasant company (as well as the standard daily questions) from the friendly village locals. 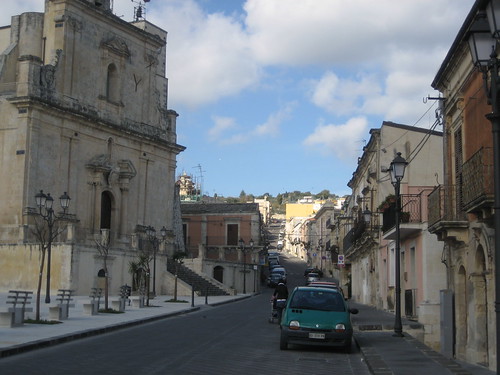