The mosaics at Villa Romana were the highlight of today's voyaging — and I'm very glad that I managed to fit them in this afternoon. However, by the time I was done with exploring the Roman mansion, and was back on my bike, it was the very late hour of 4:40pm; and the cold, dark onset of night was approaching rapidly. As I rode on towards the town of Piazza Armerina, I sought reassurance from a little brown ferret, who was promoting a nearby campground called "Agricasale" (so-called because it was an "Agriturismo" or "farm holiday" facility, and because of Villa Romana's full name being "Villa Imperiale del Casale"). The Agricasale ferret smiled at me from bright yellow signs (placed everywhere along the road); and under him was painted the instruction: "Follow me!" Pity that the little bugger never cared to mention just how much more following I needed to do, before I found the place. 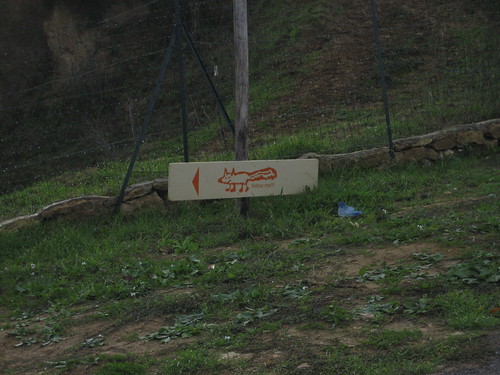 The cute ferret signs began immediately outside of Villa Romana. In my ongoing quest to find a single campsite in Sicily that's actually open (in November), I decided that today could just be my lucky day — I might even "live the dream", and find the place in full swing tonight — so I dutifully followed the ferret. The signs led me along the short road that leads to Piazza Armerina, and all the way through this small but charming old hillside town. In order to reach central Piazza Armerina, I had to ascend a street that was not only cobbled and super-bumpy, but that was also the steepest road I've encountered anywhere in Sicily. What with the weight of 4 dead cows on the back of my bike — and with low gears that are as reliable as a Bolivian train — pedalling was simply not an option; I was forced to get off, and to submit myself to pushing. Anyway, I made it up the hill; plus, I got to see the sun going down over the town's lovely (and somewhat lit-up) historic centre.

5:05pm. I'm through the town, and back on open highway. Quite dark and quite cold now. And still my furry rodent friend says: "Follow me!" OK, mate, I'll keep following — but how much further is it to this daym place?

So what else could I do? I kept following. I turned onto lesser roads. I ignored the barking of dogs. I brought out my headlamp, attached it to my helmet, and switched it on to full-beam. Still no Agricasale. Almost pitch black. But luckily, at least the road was downhill all the way. I prayed that I would be rewarded eventually — for all this insanity of riding in the dark — and that G-d, rather than Murphy, was with me.

Finally, at 5:40pm — after riding endlessly down, and reaching the extreme bottom of an enormous valley — I found the place. Just as well, or I would have wrung that scrawny little ferret's gawdamn neck. And miraculously, it was open! I was the only person there for the night — no other tents, and not even a single campervan or anything in sight — but the gate was unlocked, the reception room was lit up, and the welcoming owner was there to greet me. Had it been shut, I don't know what I would have done: I guess that, like on my first night, I would have had to camp outside the property. But tonight, the stars were aligned in my favour. Not only was Agricasale open — it was also a very nice place, and one that afforded me much more than the simple night in a tent that I'd bargained on finding here.