This morning, after an exhilirating sprint up the mountain, we finally made it to the grand finale of the Salkantay hike, the Lost City of the Incas itself, Machu Picchu. The place may be overrun by tourists; but really, when you get there, you can see why so many people go out of their way to visit this place. Putting aside the history, the romance, the mystery, and the culture, Machu Picchu — city and surroundings — is without a doubt one of the most stunningly gorgeous places I've ever visited. Our guide, Feliz, was good enough to give us a tour of the ruins. 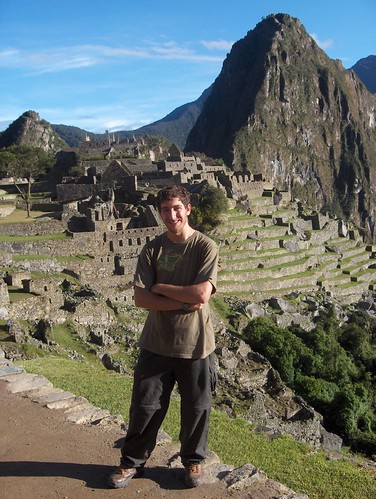 Despite decades of research and analysis, Machu Picchu remains a site clouded in mystery. It was abandoned some time before the Spanish conquistadores arrived in the area, but no-one knows why (some say disease, some say war, etc). The reason for building the site at that location is also unknown (although the fabulous view just might have something to do with it). And, also unknown is the primary purpose, or the meaning, of the city (e.g. city dedicated to a particular G-d, city of commerce, city of worship, etc).

What's more, contrary to popular belief, the famous mountain behind the city is actually Wayna Picchu mountain (the word "picchu" means "mountain" in Quechua), and Machu Picchu is an undeveloped mountain that overlooks the city less spectacularly, from the other side. The city of Machu Picchu lies between these mountains. So the famous postcard shot is actually of Wayna Picchu; and most people who haven't visited, have never actually seen what Machu Picchu (the mountain) looks like. 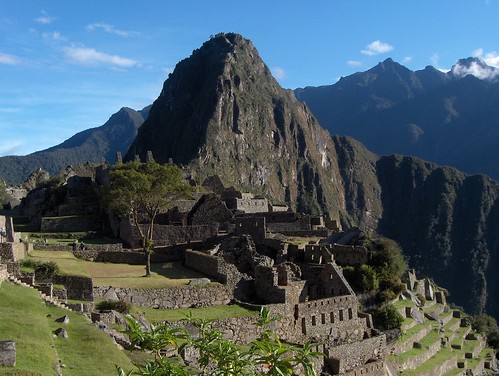 The classic postcard shot of Machu Picchu city, with Wayna Picchu mountain in the background.

This morning's tour covered many of the more significant parts of the Lost City. We saw how the city is divided into two parts: one part (closer to Wayna Picchu) for work and industry; and the other part (closer to Machu Picchu) for living in. In between is the central square, atop which the king and the priesthood would address the assembled masses — who could hear their leaders exceptionally well, due to the brilliant acoustics of the square. 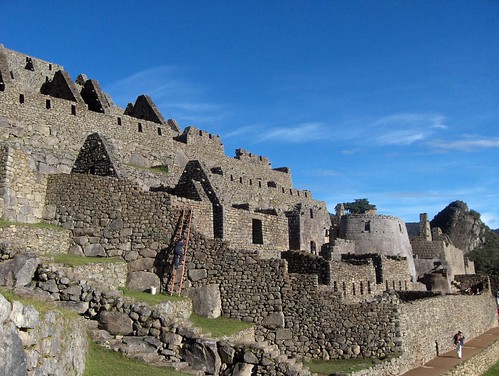 The living-in part of the city.

We saw some of the houses where the priests lived — the houses for commoners were next door, but were quite clearly less luxurious. We saw a number of temples as well, most of which were dedicated to a particular G-d being symbolised by an animal. The ancients carved flat stones into the floor of these temples, in the shape of the animals in question (e.g. puma, llama, etc).

And, of course, we had plenty of time to take in the gorgeous natural surroundings of the Lost City. We were very lucky with the weather: it was a perfectly clear morning, and we could see the whole city, and all of the towering mountains around it. 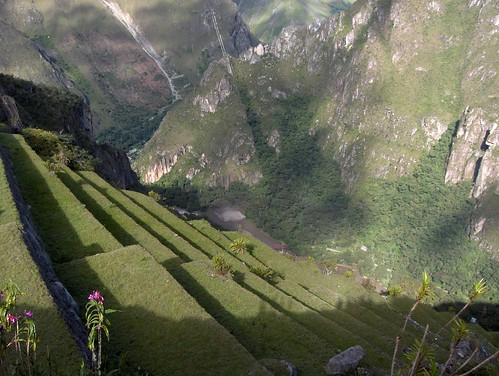 The awesome grassy steps of the city, and the massive mountains and valleys all around.

The mountains are all so tall, so majestic, and so forbidding: the Ancients must have believed that each one was a powerful G-d. I can see why. 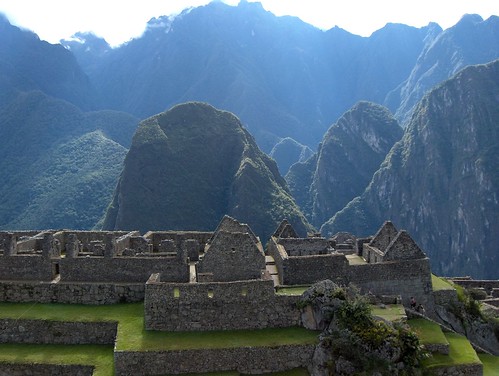