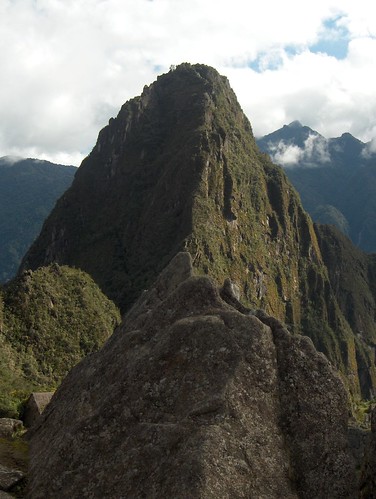 Stijn (of the Belgian Front), Regina, and myself branched off from the rest of the group, and made our way up this final mountain. We were the only ones who were crazy enough to still have an appetite for more, after the insane amount of walking we've done lately. It's about an hour to climb to the top, and it's pretty steep most of the way. However, there are (crude) stairs, as well as ropes and handholds, most of the way — which is more civilised than what we've gotten used to, anyway.

Once we reached the top of the ruins, we stopped to relax, and to admire the panoramic view. Like I said, you really do get the best possible view from up here. 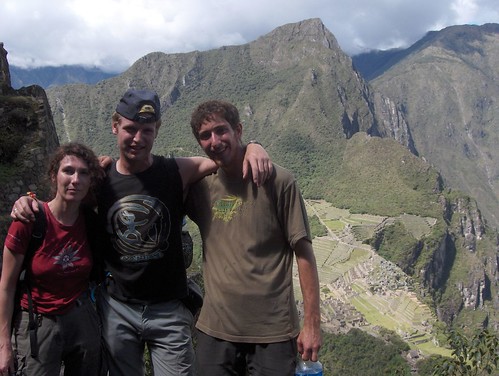 The three toughest bastards of the group, admiring the view of the city spread out below us.

The view of Machu Picchu itself is clearly the highlight; but the views of the surrounding mountains and valleys are pretty damn nice, too. 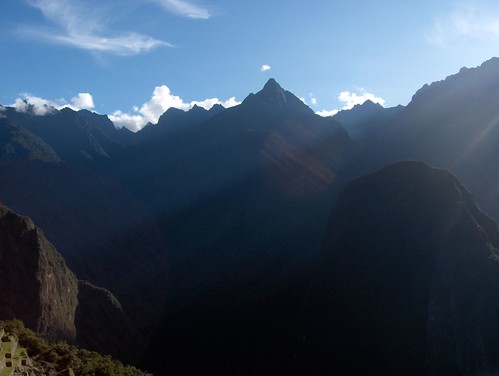 We did go to the very top of Wayna Picchu, but not for long: it's way too small and crowded up there, and the views are just as magnificent a bit further down.

The return journey to Machu Picchu is a bit quicker, but much more scary. When you're going back down the mountain, only then do you realise just how steep the path really is, and just how crude and inadequate those stairs and railings are. I'd hate to imagine how many Incas died a perilous death while walking this path; or worse, how many more must have died whilst building the place. Anyway, despite that, one thing's for sure: they certainly did an amazing job.