Yes, it was very stupid. Yes, we really were completely lost. Yes, we were lucky it didn't turn out very bad. Yes, it was fun and it was a good experience. And no, actually, we don't regret doing it one little bit.

Today, Jack and myself decided to explore some of the ruins north of Cusco. We made it (on the bus) to the first one; but we never reached any of the others. Instead, we became two Aussie bogans, lost in the mountains; and we had a grand adventure — one that we hadn't planned or anticipated at all.

A popular little day trip from Cusco, is to get a public bus that heads north, and to hop off at the ruins of Tambo Machay. From there — according to Lonely Planet — it's a pleasant 8km walk back to Cusco, via the ruins of Puca Pucara, Qenko, and Sacsayhuaman (the last, pronounced "sexy woman", being everyone's favourite, for the name and for the ruins, and for its being conveniently close to Cusco). For Jack and myself, our plan was to cover this route today.

We started a bit late — we got to Tambo Machay at about 1:30pm — but we weren't too worried about the time. Still a good 4 hours of daylight on our side; and if we didn't make it to all the ruins, we could always (we assumed) get a bus back to Cusco easily enough. 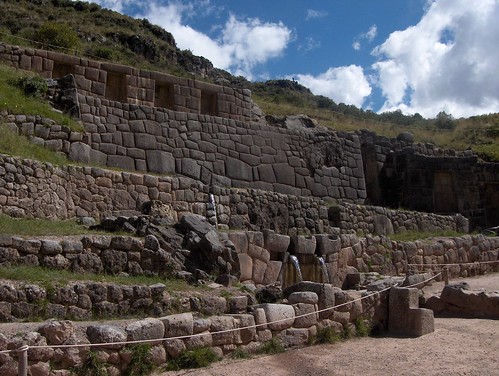 From Tambo Machay, we took what we assumed was the walking trail to Puca Pucara, out into the mountains. The trail wasn't 100% clear, and it didn't seem to be marked, and there was no-one else on it; but that didn't really bother us. We just kept on following it, assuming that we'd get to Puca Pucara soon. 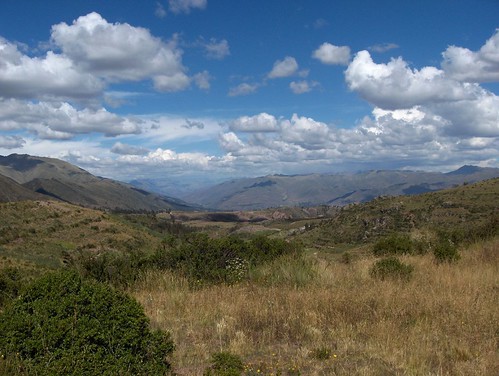 Yeh, we were kind of in the middle of nowhere.

After about 1½ hours of walking, we stopped for lunch, and feasted on some fruit, some eggs, and some cheese. There were still no ruins in sight; but we figured they'd have to be coming up pretty soon now.

Another hour or so of walking passed us by, and still, no ruins. In fact, no signs of human habitation at all, past or present. Then, we stumbled into a sort of valley, which was filled with llamas, and which had a few little boys running around and herding them. The boys couldn't have been more than 5 or 6 years old. When they saw us, they all hurried over to us, and started milling around us and smiling eagerly. 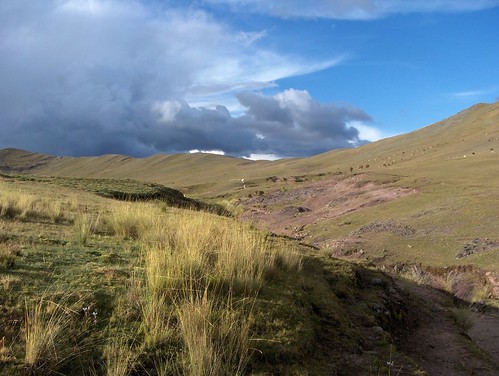 Valley of the llamas.

They barely spoke any Spanish — only Quechua. I wish I'd brought my Quechua phrasebook with me — which my friend Arthur Cheng so generously got me for my 21st — but alas, I left it back at Loki this morning. So we couldn't really communicate with each other at all. However, the boys started pointing at my camera (which I was holding), and making clear that they wanted me to take their picture. 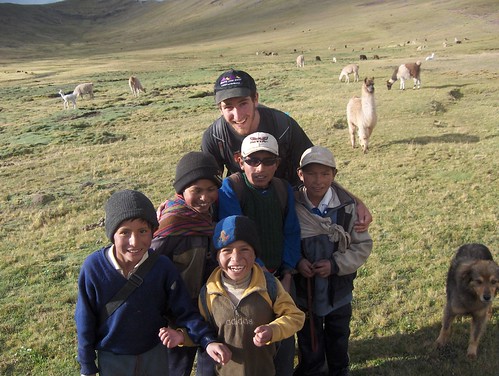 So we took a few pictures, of them with us. And then, as is customary when photographing locals, we gave them about 3 soles (USD$1) for "the service". Poor kids: that's probably more than any of their parents earn in a week. These remote highland communities are easily among the most impoverished, neglected, and oft-exploited groups in all of Peru.

We continued on, out of the llama valley, and one of the kids guided us to where a nearby dirt road began. We gave him another few soles for his help, and then continued along the road.

After following the road for about an hour, it was getting cold and dark, and forbidding stormclouds were encroaching on us overhead. And there was still no civilisation, past or present, in sight. And we had nothing. No tents, no sleeping bags, and not much food. Jack didn't even have a jumper! So now, finally, we were starting to get worried. The prospect of spending a night out here in the mountains began to dawn on us, and it didn't carry much appeal at all.

Finally, miraculously, we saw someone on the road ahead of us. His name was Juan, a llama farmer from the (we soon discovered) nearby village of Qenko (which is nowhere near the ruins of the same name, that we were hoping to reach today). The only reason he was out so late, he said, was because he was looking for some of his llamas that had gone astray.

Anyway, Juan was a very nice guy, and he also realised that we had no chance of making it back to Cusco tonight; so he offered to take us back to his house, and to give us food and a bed for the night. It took about 20 minutes to walk to the village, and to his house. By the time we got there, it was pitch dark, and we had to use a flashlight to make the final distance.

Juan's house was, to say the least, quite modest. The main room of the house served as a kitchen, as a dining room, as a living room, and as a home for the family's collection of cuys (guinea pigs). Because it was dark when we got there, we couldn't see the outside of the house properly, and we thought that the main room was the whole house! But there were two bedrooms as well.

The place was so primitive. No flooring, just dirt and straw. No kitchen appliances, just a firewood oven / stove. Cuys running around on the floor. One light bulb to see by. But, although it seemed incredibly crude to us, this is the standard of living for the vast majority of people in Peru. In fact, this place was probably above average by Peruvian standards; and well above average by world standards.

Juan may not have had much, but he was very friendly and hospitable to us, and he shared all that he had with us. Together, we prepared and ate a delicious hot soup for dinner, of ground corn, potatoes, and a few other vegies and spices. It was simple food, but soup never tasted so good in all my life, and it was quite fulfilling besides.

We didn't see the rest of Juan's family tonight — he tried to explain where his wife and two kids (and mother-in-law) were, but we couldn't understand him. Communication wasn't particularly easy; after all, Spanish was a second language for all of us. But anyway, after dinner he took us up to the main bedroom, where Jack and I slept side-by-side in one of the beds. It was a bit hard, and the blankets weren't terribly warm (or terribly clean — I'm pretty sure there were bed bugs); but it sure as hell beat sleeping outside. And were it not for Juan's hospitality, that's where we would have been tonight.

‹ Salkantay reunion: one day on We made it back to Cusco ›
Filed in: Cusco • Lost • Adventure • Idiots • Archaeology • Locals • Language barrier • Inca