We made it back to Cusco

After getting lost yesterday, Jack and I woke up this morning in Juan's house, feeling very grateful to have found a bed to sleep in, but also very eager to get back to Cusco. And, thankfully, after a bit of breakfast and a morning walk, make it back we did. Civilisation never smelt so good.

This morning, we met most of the rest of Juan's family: his wife, and his little son and daughter. We all had a breakfast of tea and bread together. However, the rest of the family didn't speak a word of Spanish — only Quechua. So we couldn't communicate directly with them at all — only with Juan.

Before we left the house, the family brought out an assortment of hand-made shmutters, and asked if we'd like to buy any. We bought one item each, more as a gesture of charity and goodwill than because we really liked them (I got a nice enough scarf — but it's nothing special). We also each gave them 20 soles, for all their hospitality, which they accepted with a look of wonder. We easily could have given them less: but they're so very poor, and it was so little for us, and last night they really were our only hope, at a time of desperate need. So it was the least we could give them.

With the sun up this morning, we could also see the house properly, as well as the rest of Qenko village. It's a tiny place (not marked on most maps), and everyone here lives in very basic houses, amongst their animals as well. But it's beautiful, and quaint, and the people are very friendly. 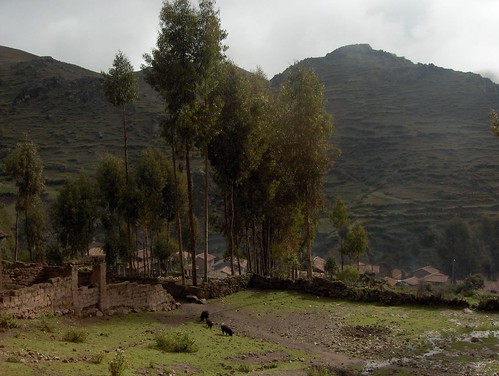 Jack and I said our farewells to Juan and family, and then we set off, trying to follow his instructions for how to reach the nearest proper town that's on a main road. Fortunately, this morning we didn't get lost at all. We followed a fairly clear trail for about 2 hours, around a big lagoon (which I believe was Laguna Piuri) and over a hill or two; and then, we were within sight of a fairly big town (which I believe was Chinchero). 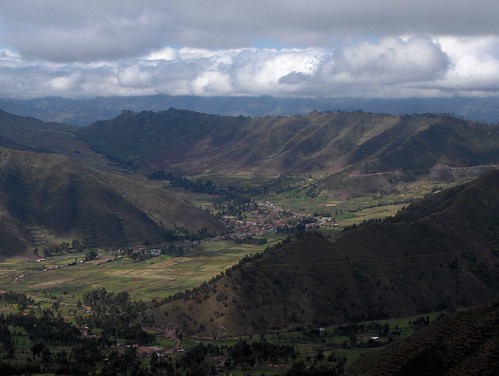 From when we first sighted the main road and the town, it still took about another hour to walk down to it. We had to trek out of the highlands, and down into a big valley, that was covered in farms and small clusters of houses. We walked around and through dozens of little farms, until finally, we made it.

Once we reached the main road, we managed to flag down a bus to Cusco within about 5 minutes (although most of the buses were going the other way, towards Urubamba). And that's where our grand adventure ended. We made it back to Cusco. We returned to Loki. We cleaned ourselves up. And we crashed.

It certainly was an experience, and an interesting and unique one at that. We may not have seen all the ruins that we planned on seeing; but instead, we saw how real Andean locals live their lives, and we got to share that way of life with them for one night. We saw a part of Peru that not every tourist sees. And we may have been alone, lost, and in a bit of danger; but it was lots of fun, and it all turned out fine in the end.