After four blissfully quiet days on the slopes, the world finally makes sense again: as of today, Kitzbühel has crowds... and lots of 'em! For my final day of skiing this year (seriously — look at the date, will you), I once again got in as much slopes-time as I possibly could. But today, I was battling some fierce hordes on the pistes and in the chairlift queues. Looks like I got in my ski trip just in time, before the rush — if it's going to be like this for the next week, then maybe the fact that I must depart Kitzbühel isn't so bad after all. Maybe... but probably not :P.

I started out reasonably early today: I was out of Snowbunnys by 10:15am, and at the bottom of the Hahnenkammbahn by 10:30am. But unlike every other day so far, the main gondola up the mountain was in extremely popular demand today: the queue extended past the turnstiles, and all the way down the stairs to the foyer below. Crikey! This took me completely by surprise, and it meant that I was waiting another 15 minutes or so before I could catch the gondola. Plus — unlike all previous days — today all the gondolas were being strictly filled to their rather-cosy maximum of 6 people per car. I usually change into my ski boots while riding up the gondola: but today I simply didn't have room to move, so I couldn't change into them until I reached the top (thus cutting off eveng more time).

I took "the usual" route today (quite similar to Tuesday's route), of Hahnenkamm to Steinbergkogel, then on to Pengelstein, and then the 3S "big boy" over the valley. Between Hahnenkamm and Pengelstein in particular, all the slopes were utterly crammed with people, and all the lifts were bursting at the seams with chaotic queues. Here in Austria, it seems that Christmas sometimes comes late; but that when it does come, it does so with a bang. If you know what I mean. 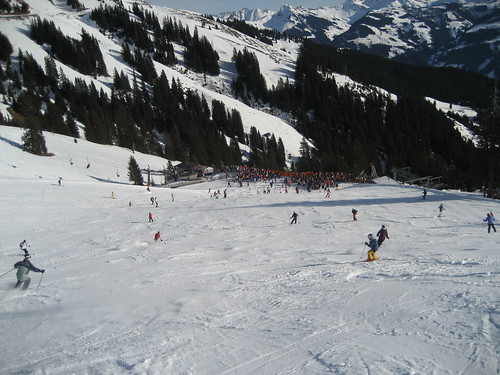 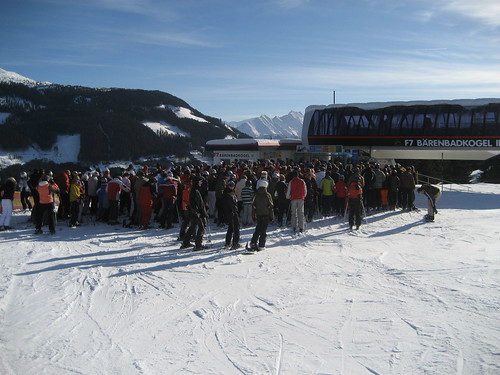 Enormous queue to get up the chairlift to Pengelstein and to the 3S.

It was quite tedious, this first leg of the day's route: lots of waiting around in queues, and lots of slowing down in the high-traffic spots on the pistes themselves. But eventually, I made it to the 3S (fortunately, the big bad boy himself didn't have a big bad line), and then was able to continue on to the eastern areas of Würzhohe, Bärenbadkogel and Zweitausender. And once I reached the runs over here, I was relieved to find it significantly quieter (although still busier than usual).

All this year, I've been doing various crazy adventure sports (many of them for the first time in my life), and each time I've always said to myself: "hey, have no fear, go insane — you're only 21 years old and travelling the world once". This being my last day of intense adventure sport as a 21-year-old (most likely, at least — unless something happens in the next 6 days!), I felt obliged aprovecharse (Spanish for: "to take advantage of") the opportunity. I would have been crazy not to have been crazy today. So I did a few black runs.

I tried two different blacks in the Würzhohe area. The first one was sort-of an accident: I meant to take the adjacent red run instead (stupid Austrian piste colours); and by the time I was halfway down the black, it was so difficult to turn on the iced-over powder snow, that I was forced to cut across to the easier red slope. The red was nice and challenging, too: reasonably straight and smooth; but very steep, and very icy, and it basically necessitated jump-skiing.

The other black run that I did, was an unmarked piste (that would have been black were it marked) that runs under the chairlift down to Würzhohe. This piste was a serious challenge — mainly because it's covered in giant steep moguls, which (once again) were impossible to turn on, short of jump-skiing over and around them. This was the first time I've really tried my hand at jump-skiing — and boy, is it tiring! But still good fun and well worth it. 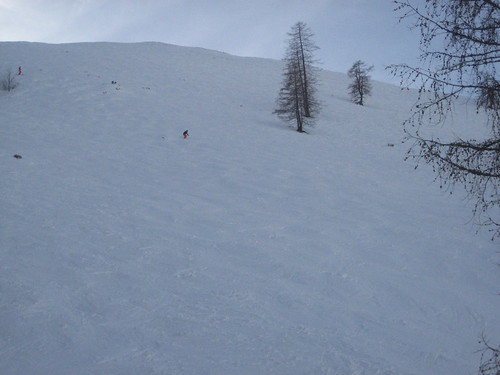 Unmarked black under the chair: long, steep and covered in moguls (bumps); but despite all this, many dare-devils were trying their luck on it today.

I tested my mettle on the black runs, and then I relaxed at Bärenbadkogel for a lunch break. Fortunately (unlike yesterday on the Horn), today I was able to sit down at some outdoor tables, without getting kicked off or being asked to order something. A short while after lunch, who did I happen to bump into: none other than Nikolas and Viktor, my Swedish friends! The crazy blonde-haired pair are both on the slopes once more; although Nikolas went skiing without his poles today, as his arm (which he injured two days ago) is still too bruised for him to be able to hold them both. It was great to run into them, and the three of us skied together for the rest of the afternoon. 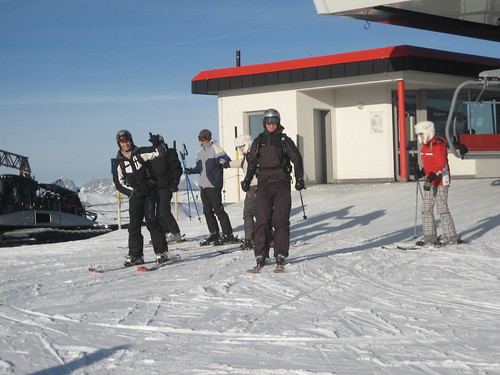 We had a fair while to hang out on the eastern runs: and I enjoyed my final hour or two on the slopes, by taking advantage of the relative quietness and of the exhilarating terrain around here. A few minutes after our surprise reunion, we saw something a little disturbing on one of the pistes: someone had evidently injured themselves quite seriously, because a wall of about 20 skiers planted their skis in the ground (to stop people skiing through the accident spot), and a rescue helicopter came to airlift the invalid (whoever it was) out of the resort. Ouch — must have been bad, because I've never seen them airlift anyone off the slopes before; usually, two ski patrol people just plonk you on a stretcher, and ski you down the mountain. Apart from that incident, though, it was all fun and games this afternoon. 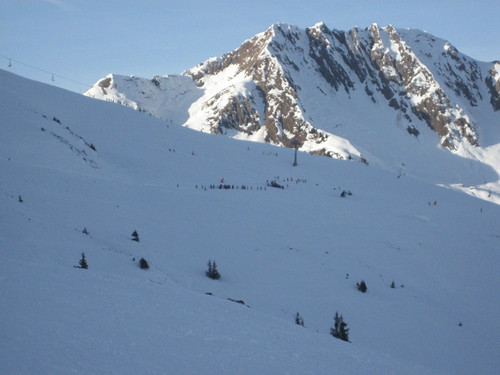 Crowds gather around an injured skier, and an emergency helicopter descends to airlift him off the snow.

We were having so much fun skiing on the eastern runs, that we unfortunately didn't leave enough time for making our way back to Kitzbühel. Worse still, we didn't even manage to get back to Jochberg — by 3:45pm, we'd only made it as far back as Bärenbadkogel, and they'd already shut the lifts leading the rest of the way to Jochberg. So we had no choice, but to take the long and rather dull easy run that leads gradually off the mountain, and that pops you out at the far eastern extremity of the resort — at Paß Thurn. There is (of course) always some way to get off the mountain, when you're in a downhill skiing resort: but if you leave it too late, then it may not be the most exciting or ideal of paths.

So my final run of 2007 was not the kamikaze of ski runs — but it was quite scenic, and also nice and relaxing. Once we finally reached Paß Thurn at the bottom, we then had to wait for a bus back to Kitzbühel: it was about 15 minutes before the bus arrived; and then at least ½ an hour before we arrived back home, by then well after dark. And that's it for my skiing adventures this year: Kitzbühel's been sunny and beautiful (if annoyingly icy), and it's been a great resort to ski at.