We got up early to see a geyser erupting into the sunrise this morning and then we only had to endure the cold for another five minutes. Before we knew it, our Salar de Uyuni tour group had arrived at the most fabulous hot-spring-heated thermal bath ever! The air was absolutely freezing this morning. This made it only all the more unbelievably pleasurable to jump into a pool of app. 42°C hot water (also a bit painful, at first). Followed by a delicious breakfast of pancakes, and a visit to the Laguna Verde itself. Great end to a fabulous three-day tour. 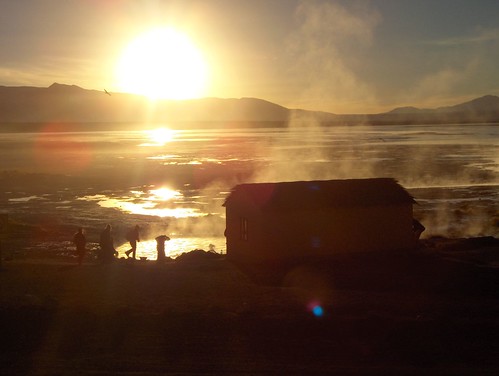 Stripping down to my swimmers in the freezing cold air was not much fun. Neither was actually getting into the pool — fot the first minute or so, it felt like my fingers and toes were on fire, so great was the sudden temperature difference between air and water. But it was well worth it. The pool was so nice once we got in, that we all stayed inside until we virtually got dragged out (for breakfast); we all could have stayed inside for the rest of our natural lives, no problems. Although I must say, it was also worth getting out, for our scrumdiddlyumptious breakfast of pancakes with "dulce de leche" (special chocolate spread), yoghurt and tea.

Once we finally managed to tear ourselves away from the hot springs, and to get dressed, we continued for the final ride in our 4x4, to go and see Laguna Verde itself. This final lagoon is one of the most impressive ones that we've seen on this tour: the reflection of the massive mountains in the lagoon's perfectly still waters is quite a sight to behold. I haven't yet been to Lake Louise in Canada; but from what I hear, it looks something like Laguna Verde did this morning. 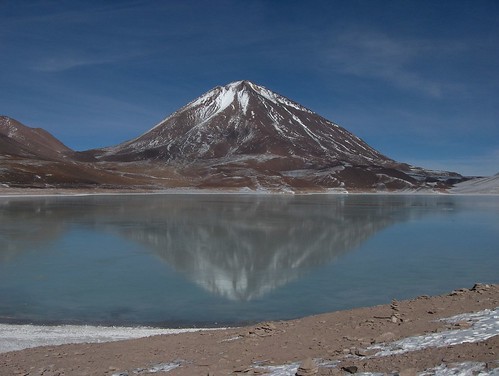 After that, it was a short ride to the start of the Chilean frontier, where we saw the flags of Bolivia flying high in the morning wind for the last time, and where we (i.e. the four of us not going back to Uyuni: myself, Chris, Leila and Christina) transferred to a minibus that would actually take us into Chile. Farewells were said to the other two members of our group, and to our tourguide and his son Willy; and then that was the end of our tour.

All up, it's been a great tour, although hardly a very strenuous one. The whole Salar de Uyuni and "southwest circuit" thing is pretty easy to do: I mean, really, you just sit in the 4WD for three days, stop and get out to take pictures every now and then, and eat and sleep (and try not to freeze to death). I highly recommend seeing the salt flats and the scenery of the south-west, because it is absolutely stunning — some of the most remote and unique geographical features to be had anywhere in the world — but it's not quite the same as a trekking trip, where you're on your feet and feeling pumped all the time.

We've also been lucky enough to (apparently) defy the odds, and to get reasonably well-fed, well-bedded, and well-equipped with a vehicle that didn't break down. And, of course, we had the most important thing of all: a great group of people; ultimately, that's always what either makes or breaks a trip such as this. Salar de Uyuni: it's been sweet!