One last place here on Ko Tao that I've heard good things about, but that I haven't previously visited, is a place called Freedom beach. Since this was my last day on the island, today I tore myself away from yet another trip to Moondance beach, and instead ventured onto new sands. Freedom beach is in the opposite direction from Moondance: it's on the eastern side of Chalok Baan Kao, in a tiny protected bay just in from Chalok's eastern headland. Lovely place, and a great final impression of Ko Tao. 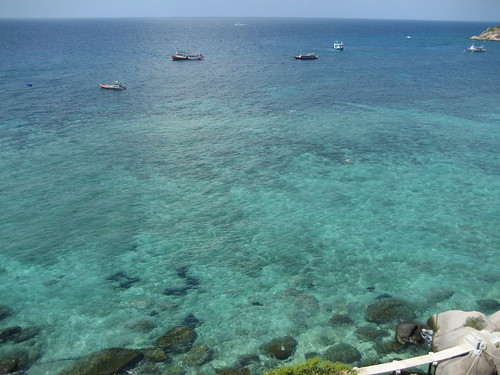 View of tranquil Chalok bay, from the rocky cliffs on the way to Freedom beach.

This morning I checked out of Taraporn, after a largely sleepless night spent battling an endless stream of mosquitoes (unfortunately, my room in Taraporn had no mozzie net). Nothing more annoying than slapping empty walls in vain — only to be relentlessly hounded by the horrid buzzing of bugs in your ears, all night long. From the main street of Chalok, I walked east to the bay's looming headland: and by following the regularly-posted "private road — no entry" signs, I was soon able to find my way to Freedom beach :P. Of course, once I got there, nobody seemed to know or care about it being ostensibly private.

Freedom's a gorgeous beach, but sadly it's quite small and rather overcrowded. Since it's so close to Chalok, and since it's one of the best swimming beaches on Ko Tao, it's popular with every man and his dog. I was stuck between a group of loud topless Italians, and loud snobby French, for most of the morning: naturally, neither of these groups said a word to each other, or to me (I think the Italians managed a "buon giorno", but that was it). The beach has lovely sand, and you can take your pick between the sun-drenched spots further up, or the palm-shaded spots closer to the shore. The water is also lovely, and the protection of the Chalok headland makes it much calmer even than Moondance; however, it's extremely shallow — almost too shallow to swim in. And if you swim out a bit and look to the seabed, you'll find it extremely sharp and rocky. Nevertheless, it's really not a beach to complain about: topless Europeans and shallow rocks aside, it's still paradise. 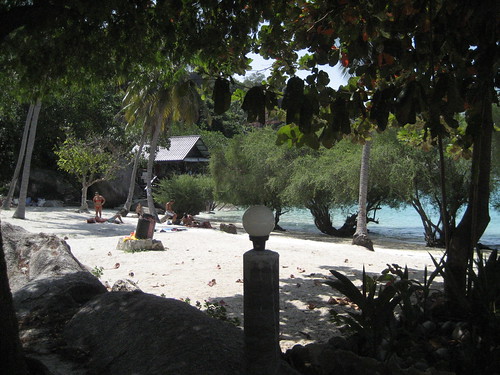 I relaxed on Freedom beach for almost the entire day, enjoying a good book and occasionally taking a dip. I also enjoyed the great music resonating from the nearby beach bar: at one point, they were playing the songs of the legendary Latin rockstar Manu Chao for about an hour straight, including my all-time favourite Me Gustas Tu (since I first heard it 9 months ago, every second sentence running through my mind, every minute of the day, has been ¿que hora son mi corazón?). By the afternoon, though, their soundtrack had deteriorated to the inevitable, ever-present Bob.

There's no restaurant on the beach itself (just the bar), but there's a great one overlooking it, just at the top of the stairs that lead up the hill. I had my final Ko Tao lunch at this restaurant in the afternoon, and I followed it up with a long siesta (dozed off at the table), which I needed in order to catch up on the sleep that last night's mozzies so unjustly robbed me of. When I finally dragged myself away from the beach, as the day began to wane, I returned to Chalok and grabbed all my bags. From the main street, I managed to jump on the back of a motorbike taxi — quite cheap, and better than riding one yourself — which took me up to Mae Hat, from where my ferry out of Ko Tao was to leave later in the evening.