Today was my third and final day on the idyllic Moondance beach, and it was no different from the days before it. More of relaxing, more of occasionally taking a dip, and more of doing very little. I found Robert in his usual nesting-spot, sprawled on the sand next to a big rock; and in the afternoon, we were joined by a friend of Robert's, who's just arrived direct from Austria (and who's not gay — although he does run a bar in Graz), as well as by Iris and Andrea.

It was a long and lazy day, and we followed it with a long and lazy evening, spent sipping a few drinks at the hippie beach bar next-door to my pad. I was surrounded by Austrians — four of them now! — but they're a friendly bunch, and I survived their regular Deutsch interludes in the conversation. There was some cool fire juggling on the beach; and everyone seemed to be getting stoned except me. Hey, if I made it through South America, and if I made it through Amsterdam, then I'm bloody well going to make it through Thailand without smoking any weed. Anyway, I was feeling pretty mellow throughout the evening: no doubt I partook in plenty of "passive weed smoking", just by sitting next to everyone for so long. 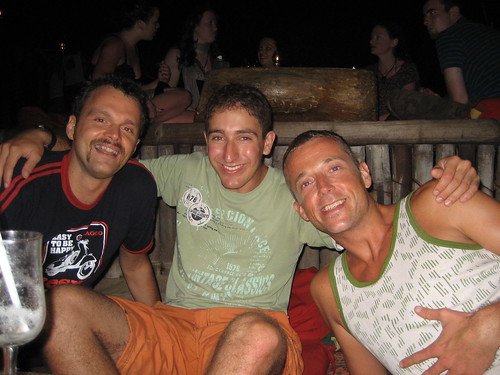 Robert’s friend, myself and Robert (left-to-right), reclining on the cushions and mats at the beach bar.