What can I say — he's my dad! And until today, I hadn't seen him for a ridiculously long time of 8 months, since I left Sydney back in February. This morning, my dad flew into Boston (after having a flight cancel on him, and getting stuck in LA for 12 hours), and we had a warm and heartfelt reunion. Like me, he's here for my cousin Adam's barmitzvah. And unlike me, he's not doing a crazy 12-month trip around the world: he's just on holiday for two weeks, and then he goes straight back to Sydney. It's very, very nice to see him again — as with all my family, I've missed him a lot during my time away from home. 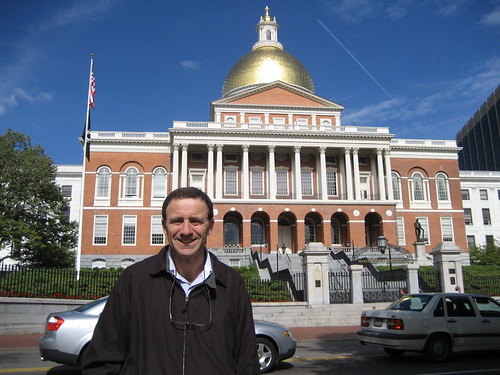 My dad managed to take two weeks off work — and, with more difficulty, to leave behind my step-mum and my two gorgeous little step-sisters for two weeks — in order to come here to Boston. As well as being here for the barmitzvah, he is (of course) also here to see me; as well as to share in the simcha with my auntie and uncle from Sydney, who are also flying over for the event. Unfortunately — despite coming and meeting the Boston cousins back in 2000 — my mum is not going to be able to fly here, and she's missing out on the reunion and the barmitzvah. It's a long and complicated story — it's called the crazy story of my family, and I'm not about to start telling it right here and now — but basically, there are many reasons why she's not attending. Anyway, I guess I'll just have to keep missing my mum (although not nearly as much as she's missing me!) until I return back home next year.

as long as you are eating well