Our stay in the oasis in the Cañon del Colca last night was a short one; because this morning we got up at 2am, in order to complete the three-hour hike out of the canyon before sunrise. It was steep, it was dark, and it was cold. But it was a good slog we put in; and it meant that we were able to get to Cruz Del Condor, just in time to see the condors fly.

Here in South America, every hike or tour seems to involve at least one morning where you have to get up ridiculously early. For our Colca Canyon tour, this was our second such morning. Anyway, it wasn't too bad here: not as cold as some of the dawn starts that I had in Bolivia, a few weeks back; and definitely worth it, for the whole condor-watching thing.

Before we set off this morning, we had a very quick snack of bread and tea; and then we grabbed our stuff, and headed out of the oasis, and began the ascent back up the northern side of the canyon. It was dark and it was uphill all the way; but we were able to see reasonably well with our headlamps (which everyone had), and at least it was a proper path, rather than just a cross-country bash. The air got much colder as we approached the top: we were doing fine in t-shirts most of the way, but then we had to rug up as we got closer to our destination.

The Colca Canyon really is a softer place than other hiking areas. For those who have had enough by the third day, there is the option to ride out on a mule. Sarah and Dan, who both had fairly aggravating stomach bugs, and whose muscles were aching from head to toe, elected to do this. So they got to rise and shine an hour later than the other four of us, and they rode up rather than doing it on foot. There were also a few other tourists, who hiked up alongside us for a while, but who then gave up towards the end, and hopped on some spare mules to get them the rest of the way there.

One of these was a Chilean girl, who didn't have a light, and who was relying on us to help her make the journey. Not sure what was harder for her: hiking up without a light; or then jumping on a mule that had no saddle and no ropes, when she hadn't even ridden a horse before, in her entire life! Poor, crazy girl.

It felt really, really good to reach the top. Our timing was perfect, too: the sun rose just as we passed out of the lip of the canyon, giving us some great, scenic views of the mountains at dawn. Quite cold, but we were pumped, and it was spectacular. 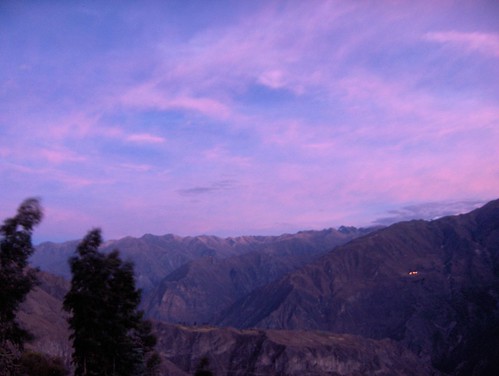 Once we were through with the uphill, it was about another 15 minutes of walking, to get back to Cabanaconde, and to complete the big loop of our hike. Once there, we rendez-voused with Sarah and Dan, and we once again had a nice breakfast in the village. Then, it was on to see the condors.