Back at the Salinas

After our visit to the Inca ruins of Moray this morning, we of the Hampy crew continued on this afternoon, and walked the short distance from Moray to the Salinas (ancient salt mines) near Urubamba and the Valle Sagrado ("Sacred Valley"). I already visited the Salinas about a month ago (with Jesus); but it was definitely worth visiting them a second time. With over 4,500 man-made salt pools on the side of the mountain, it's both an ingenious and a breathtaking site to behold. 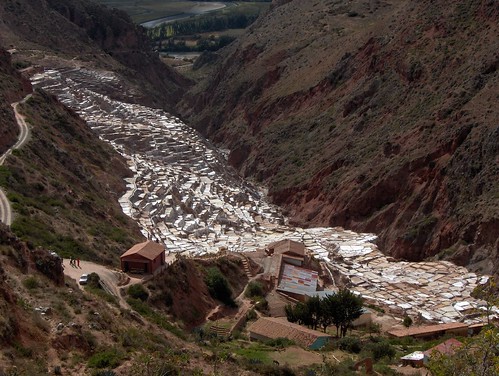 Because we walked from the higher ground to the north — rather than from the Valle Sagrado, as in my last visit — we got a spectacular view of the Salinas, as we descended down into them. We could see virtually the entire collection of salt pools arrayed along the hillside, as well as the valley, behind in the distance. They also seem to charge an entry fee when you come this way, but not when you come from the valley (I guess Jesus knew about this last time, when he led me in from the valley — clever bugger). Additionally, you get some spectacular views on the way, walking north from Moray to the Salinas. 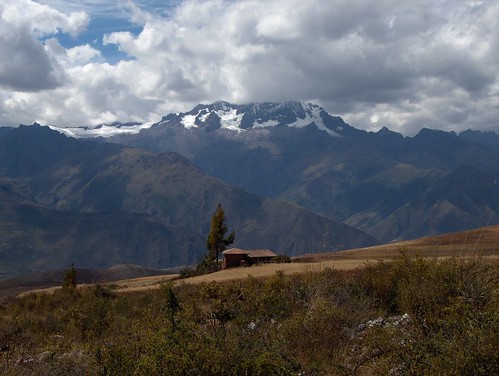 Great scenery between Moray and the Salinas.

The Salinas are just so big, there's always more to notice and more to discover when you visit them. For example, this time round, Wil pointed out that there are little water distribution channels that run throughout all the pools, making sure that the water flows down through them all evenly. We even saw one little canal, filled with salt, that had a bridge to make the water pass over a gap! Looks like a train set for salt, or something. 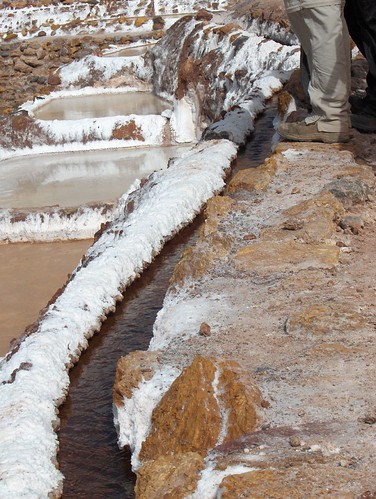 Once we were done checking out the Salinas, we continued down the path, into the valley. This was a bit of a sad time for me, because it was probably the last attraction that I'm going to see here in the Cusco area, since I'm planning to finish off the Hampy web site tonight, and to finally leave Cusco tomorrow. It was also sad for all of us, because Wil is also leaving — which he did as soon as we got back to Cusco, at about 5pm this evening (he's headed for Lima, then Huaraz). Anyway, we managed to grab a cab to Urubamba no problems, and then to jump on a bus from Urubamba back to Cusco. And thus ended our little day of ruins.