For a nice little Sunday day trip, this morning we of the Hampy crew (including the complete Pilcopata jungle crew) went on a visit to the ruins of Moray, between the villages of Chinchero and Urubamba, about 1½ hours north of Cusco. We grabbed a local bus that was headed to Urubamba, then got off just before the descent into the Valle Sagrado ("Sacred Valley"), and flagged down some taxis to take us the rest of the way to Moray. Spectacular set of ruins, as well as an intriguing and ingenious example of ancient scientific experimentation at work.

The Inca ruins of Moray consist of four giant, round holes in the ground, each of which has its curved sides transformed into massive walled steps, and each of which once had its terrace steps covered in all manner of plants and crops. 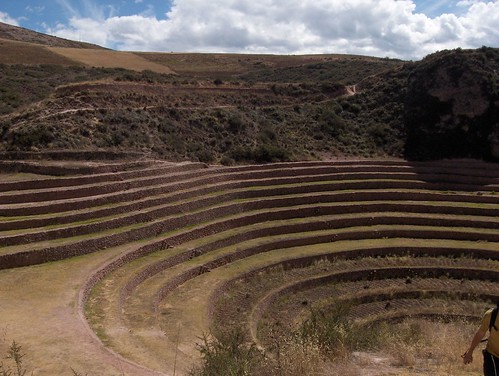 The largest of the giant “holes in the ground” at Moray.

The theory is that the Incas built these terraced holes, and then planted various crops in specially chosen places within the terraces. They were built in such a way, that the sunlight reached different parts of the terraces in different amounts, and at different times of the year. The different parts of the terraces also had different temperatures, water saturation, and other environmental factors. By doing this, the Incas were able to observe what were the best conditions in which to grow their various crops; and as such, they were able to find the most optimal parts of the countryside in which to grow those respective crops.

So, essentially, Moray was a giant, ancient agricultural laboratory, where experiments were conducted on crops and their growing conditions. Absolutely ingenious. 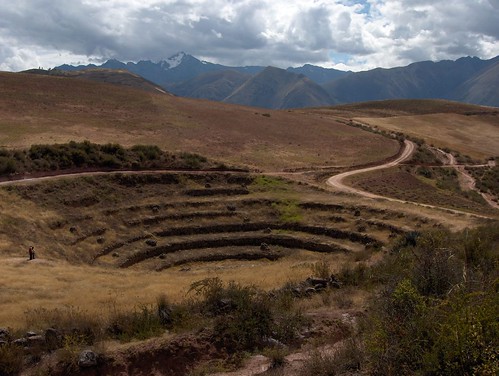 Another of the “laboratories” at Moray.

Although none of the crops are still there today, modern archaeologists and analysts are pretty sure that this is what Moray was used for. The main evidence is the presence of little irrigation channels, that run very systematically down through all the terraces. 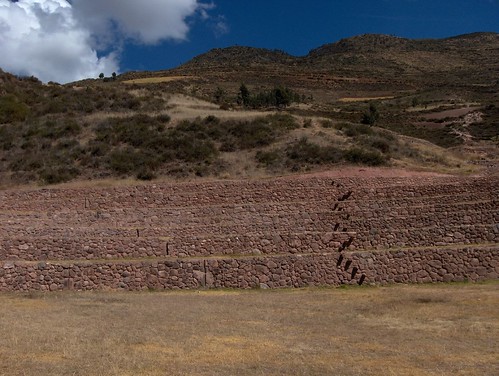 Access steps and irrigation channels running down the terraces.

We spent most of the morning exploring the "laboratories" at Moray. Then, we headed on to a nearby village to munch on our pack lunches, before heading on to walk to the nearby Salinas.

‹ Terese's despedida in Chocco Back at the Salinas ›
Filed in: Cusco • Inca • Ingenious • Archaeology