When I was out with the crew last night, I asked Kaie from Texas what she thought was the best thing to do, as an introduction to Venice. Since she's been to the city three times before, and is "in love with it", I figured she should know. Her response: "Venice is the perfect city to get lost in... so just wander!" So today, that's exactly what I did: I spent the better part of the day admiring the neverending maze of beauty that is Venice, and getting well-and-truly lost within her embrace. 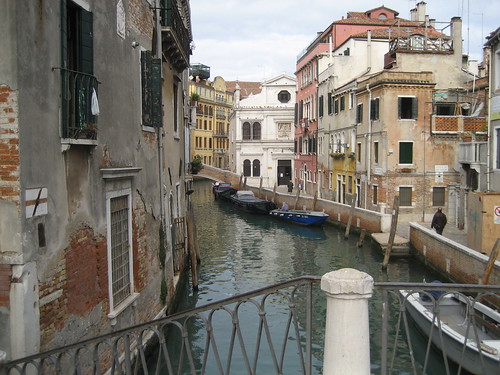 Lost in Venice: a bridge, a canal, a road. Somewhere.

There's much to love about Venice. The cafes are trendy. The fashion is high. The women are stylish. The street musicians are lively. The churches are imposing. And the marked prices would be funny, if they weren't for real. But it's the canals that really do it for me. They're literally everywhere: you can barely walk 50m without finding yourself ambling next to one, or crossing a petite stepped bridge that arches over one. The water in them must be positively filthy: but miraculously, it doesn't reek so bad that you can smell it; and the colour even vaguely hints at it being clean. The Canal Grande is the biggest and most unmissable: but the little ones are actually the city's jewel, thanks to their sheer quantity and their spread. There are other cities in the world that have canals: but I don't think anywhere else has them quite like Venice does; and I'm convinced that the city is utterly unique, and that they broke the mold straight after they built the place (if indeed they ever had a mold at all — it strikes me as more of a prototype job :P). 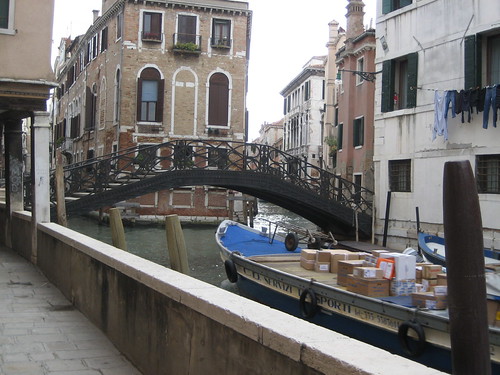 Venice is the perfect city to take your girlfriend — I’m not coming back here without one. 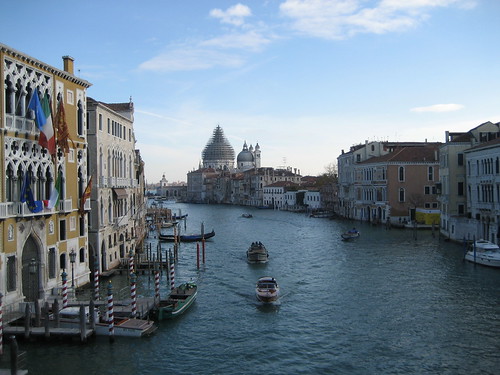 The broad and beautiful Canal Grande in Venice.

The constant presence of these lazy waterways is also a highly visible reminder of a grim fact: Venice is one of the cities more at-risk from global warming and rising sea levels, than almost any other in the world. In fact, Venice has already had more than its fair share of issues in recent times, regarding the stability of the whole place amidst its incipient canals, which have eroded much of the foundations and softened still more. But if the ocean levels keep rising, then the whole city is at risk of going under. I believe there have been various efforts in the past few decades, involving the construction of dykes and underwater floodgates, in an effort to control the situation and to prevent a rise in the canal levels. I sure hope that they can keep Venice preserved in the face of global warming: because its destruction would be one of the more tragic losses that we could incur from it. 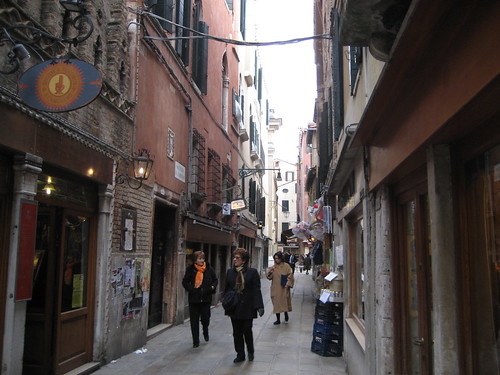 As well as being riddled with canals, all of the streets of Venice are also pedestrian-only.

The most famous sight of Venice is the central square — Piazza San Marco — which houses the city's cathedral, as well as the famous tower from which you can (apparently) see every building in the city, but not a single canal. San Marco is indeed quite gorgeous: the cathedral itself is an incredible feat of architecture, and looks almost Arabic in its style; while the surrounding maze of upmarket cafes and shops is also quite charming (although strictly for looking). Also nice for wandering in, is the quieter area of Dorsoduro, over on the south side of the Canal Grande: not so many sights here; but it's amazing to see just how many regular houses there are in this crazy city, and hence how many people are privileged enough to actually live in the heart of venice, with a boat in the canal as their main transport, and with all the city's offerings at their doorstep. 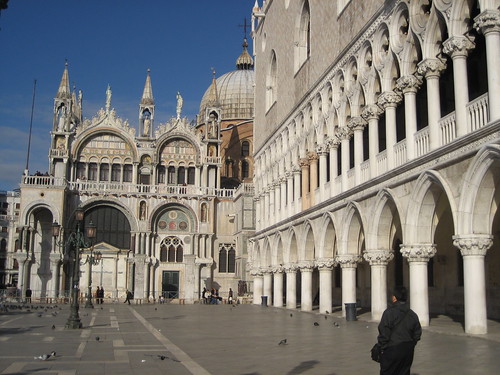 Cathedral and square at San Marco. 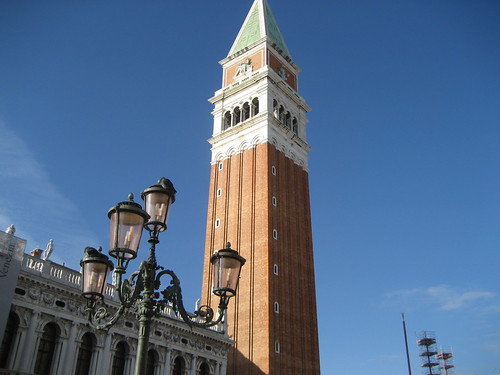 I found Dorsoduro to be a more chilled-out area in which to take it easy, and to relax for a bit. I found one large square over in this area, which was particularly so: it was filled with market stalls selling all varieties of food; but most of them had packed up and gone home by the time that I arrived. With a few fellow tourists and a lot of pigeons to keep me company, I settled down and munched on some lunch here in the square — south side is the place to be.