One of the more interesting things that I did today — more interesting than my aimless wandering, at least — was to visit the 500-year-old Jewish Ghetto of Venice. In this quiet and (to this day) gloomy-feeling corner of Venice, there's also a modest little Jewish museum. I went and gave myself a brief tour of the museum: but there isn't much to see here, just two or three rooms of Venetian Jewish memorabilia (e.g. siddurim, torah adornments, various household silverware), and a little bit of history; I spent more time downstairs in the bookshop, where they have some very interesting titles. I declined from going on the tour of the Ghetto synagogues: pity, since apparently this is one of the best-preserved and most impressive sights in the Ghetto. Amazing to see that the place has survived, and is still inhabited by Jews, to this day. 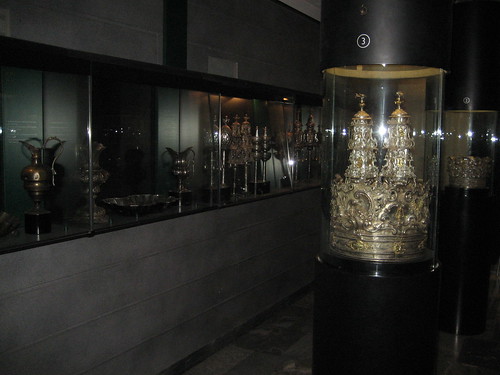 Synagogue and religious household relics in the museum.

The history of this place is quite interesting. Apparently, the word "Ghetto" was actually invented in Venice — it's believed to have come from the old Veneto word for "foundry", since the suburb housing the Venice Ghetto was at the time an industrial foundry area. So the Venice Ghetto is the world's oldest Ghetto, as well as (it's believed) the longest continually-inhabited Jewish spot in all of Europe. The Jewish presence in Venice began sometime in the 1300s, increased significantly in the early 1500s (due to Sephardic immigrants fleeing the Spanish inquisition), and remained several-thousand strong until the early 1800s. It was at this time that Napoleon conquered Venice and threw open the gates of the Ghetto, after which many Jews decided to leave it, and to live elsewhere in Venice (or to leave Venice altogether).

Like the Jews virtually everywhere else in Europe, almost all the Jews of Venice were deported to concentration camps between 1943 and 1945: their wealth and commercial establishment in the city did nothing to save them from the Nazis. After WWII, only 8 survivors returned. However, today the Ghetto (and the city at large) is once again home to a small but thriving Jewish community — there are about 500 Jews living in the Ghetto itself, there's a kosher restaurant there, and there's also (of course) a Chabad house there (as well as a full Chabad Yeshiva). 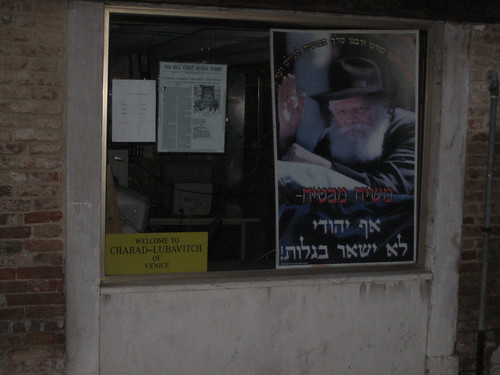 The Rebbe sends his greetings from Venice.

As I mentioned, the best part of the Jewish Museum in Venice is the downstairs bookshop. They had one interesting-looking novel there, which I couldn't resist purchasing. They also had an informative book on the history of the Jews in all of Italy — broken down region-by-region. Seeing as I've been down in Sicily for the past three weeks, I was particularly interested to see that the book had a full section on Sicilian Jewry. Apparently, for over a thousands years leading up to the 1500s, there were thriving Jewish centres in almost every major city in Sicily, with the largest centre focused in Syracuse. In fact, during the dark ages and medieval times, Sicily — under various rulerships including Roman, Byzantine, Arab, Norman, and independent rule — was one of the world's great Jewish centres. However, all that ended when the Spanish conquered Sicily in the early 1500s, and immediately imposed their inquisition upon the island — resulting in the complete and permanent end of Jewish life there. I knew nothing of this when I visited Sicily: and indeed, so thorough was the Spanish effort to wipe out Judaism from the island, that I don't think there's much left to see down there Jewish-wise, anyway. Nevertheless, interesting to know.