Visiting Meli and Phillip in Arica

Maria (known as "Meli") is a lady who lived in Sydney for quite a number of years, and who worked (as a nurse) taking care of my mother's partner's father a few years back. She's now returned to her home of Arica, Chile, where she's living with a crazy Pommy ex-pat called Phillip, and his family, and where she's retired. Today, I dragged Chris along for a Sunday lunch with these people, and we had a great day of eating, chatting, and hanging out.

Since these people follow the Latin custom of a very late Sunday lunch, and since Meli was busy in the morning anyway, Chris and I had plenty of time to kill this morning. We spent it having an explore around Arica: we checked out the beach, which is OK but definitely not world-standard; and we strolled through the Sunday market, which is very long, but not terribly alive or exotic (unlike the Sunday markets to be had in Peru and Bolivia). There wasn't much else to do, as Arica is one of those places where absolutely everything is shut on Sundays. 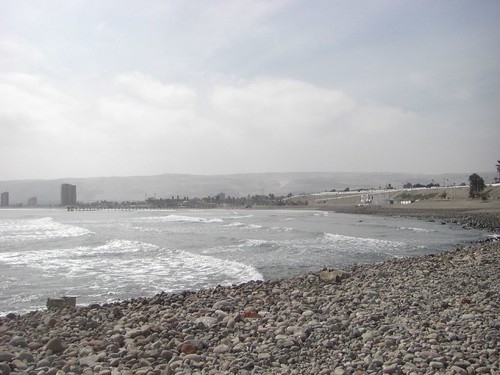 The beach in Arica: nothing special.

When it came time to head over to the house for lunch, we actually had quite a bit of trouble finding it. When I rang Meli on Friday, to get the address of the place (from Iquique), she told me that it was No. 61. After walking the entire length of their street (and they live in virtually the longest street in town!), we discovered that there is no No. 61, as the street only starts at about No. 100, and before that, there's nothing except the seashore. So we rang them to check the number, and Phillip told me that we had it wrong, and that it was No. 1651!

So, we got a taxi all the way back up, to the other end of the street (quite a long way), and had a look for No. 1651. Couldn't find that one; didn't seem to exist either. There were 15xx's, and 17xx's; but a big gap, with empty land, where the 16xx's should have been. Maybe the place got demolished, in the 5 minutes since we called them? :P We looked around everywhere, but the place was nowhere to be seen. Finally, Meli saw us wandering around, and called out to us from the front door. As it turned out, the street number was No. 1561. Arghhh — all that frustration, over a few mixed-up numbers!

It was good to see Meli again: haven't seen her since a few weeks before I left Sydney, in early Feb 2007 (i.e. about 5 months ago). She didn't recognise me, because of my head of hair and my scraggly beard — she said: "you look like a hippie!" :P 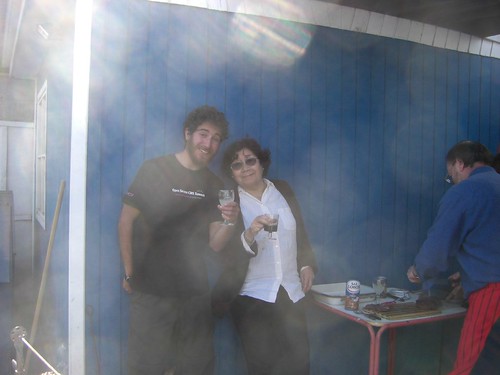 Meli and myself, enjoying a Sunday drink.

Phillip's an English man from Liverpool, but he's been living in Chile — mainly here in Arica — since 1970: that's about 37 years! Really nice guy, but very eccentric. He worked as an engineer, in the nearby Escondida mine (the world's largest copper mine), for most of his life; now his son works there too, also as an engineer. The house is his, and he lives there with his Chilean wife, and with all his kids. The poor guy's been having a bad run health-wise lately — he got hit by a car a few months ago, and broke his leg; and he's also had some bad skin cancer over the past year — but he's more alive than most people I've ever met in my life, nonetheless. 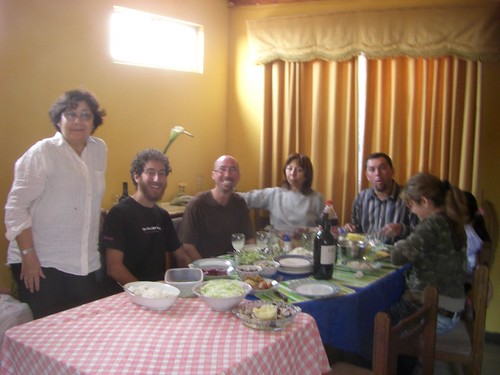 Philip also has some crazy stories, about how he's the "unofficial British consul" in Arica: he's actually filled in for the real consul on several occasions; he's helped Brits in need in the area many times; and he's taken travellers on tours around the region now and then. Very eccentric setup he has — all the locals apparently know "where the gringo lives" — but it sounds like plenty of fun.

They treated us to a massive lunch, of barbequed steak and chicken, with every imaginable type of salad and side dish to boot. Plus, Phillip was generous enough to share some of his "fine Chilean Pisco" with us, as well as various other drinks, such as beers and Pisco sours. Great spread: by the time we left, we could barely walk! 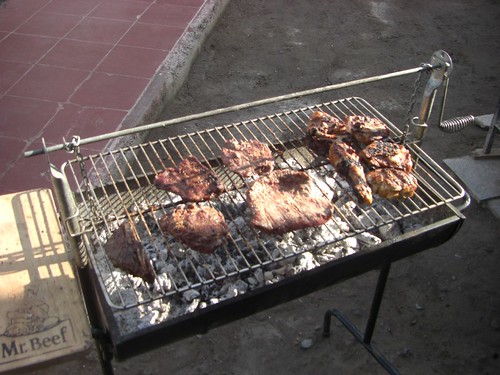 We also ended up staying for dinner, which consisted of the rest of lunch — as much more as we could fit in, anyway. Nice relaxing day of eating, chatting, and hanging out. And very good timing, too: because Meli's flying down to Santiago tomorrow, to stay with her son; and she isn't planning to come back to Arica until next year! So I just caught her in the nick of time.

The beach, La Lisera is

The beach, La Lisera is terrible! I live on the other side of Arica in Chinchorro and we have a great beach over here.

Your friend sounds delightful and looks familiar...perhaps I have seen her around town.