Every bar in the world is unique: but few are as unique as Pai's "sewer bar". On the main street of Pai, they have a hilarious setup: the town's largest supermarket (not very large) is also the town's cheapest source of alcohol; and in order to cash in on this fact, they've got a long line of picnic tables and benches available right outside! So you can buy your booze for less, and not even have to worry about finding somewhere to drink it. There is one small catch — namely, the sewerage drain that runs uncovered down the side of the street, and that makes the picnic-bench area positively reek — but 'tis a small price to pay. And in my opinion (and if you have a different opinion, then you may kindly shove it up your a$$ :P), this only adds to the ambiance. There are some things you can only do in a small town in Thailand. 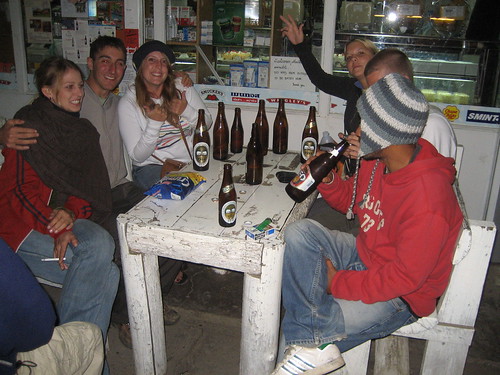 Sonny and I were the pioneers of the sewer bar this evening (hell, we even christened it). We found the place pretty soon after dinner; and we hung out there for a good 4 or 5 hours thereafter, chugging down that awful local Thai substance known as "Chang beer" (of which I consumed far more than was good for me), and earnestly discussing the various political and socio-economic problems of the modern world — more as a distraction from the perpetual reek, than for any other reason. We were joined later by Marie and Claire — who were good enough sports (and budget enough backpackers) to join in despite the stench, as well — and a bunch of other random Pai regulars. 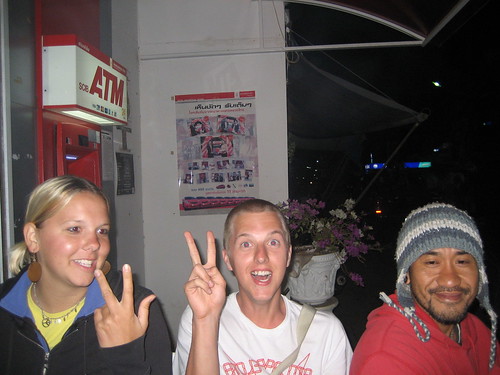 Claire, Sonny, and random Filipino dude (left to right): drink more, and you notice the smell less. Seemed to work for us.

The sewer bar proved to be a great place for the parsimonious traveller to get drunk, in preparation for the rest of the evening. Plus, a good vantage-point from which to observe the colourful goings-on of the night market around us, and to enjoy the free (albeit crap) live music being played by neighbouring buskers.

Nevertheless, a place with that little charm can only ever be an entrée. And so, we eventually said our farewells to the sewer bar, and continued on to Pai's (more) real bars for the main course of the evening. The bar scene was pretty similar to that of last night: we hit the same joints, and it was once again a ridiculously mellow and social affair. However, the combination of a UV overdose while hanging by the pool this afternoon, and the excessive quantity of Chang beer that the sewer bar delivered, ultimately took its toll: I was utterly buggered by midnight, and so I had to retire early before I collapsed.