Talk about contrasting experiences: following yesterday's stormy ride to Modica, today's riding was nothing short of divine. This morning — after an amazing B&B breakfast — I rode out of Modica, and ended the mountain detouring of the past few days, by returning to Sicily's ever-gorgeous coast. The morning weather couldn't have been better, or more different to yesterday's: all those evil storms and winds were gone; and were instead replaced with clear blue skies, and with warm and soothing sunshine. First destination of the day: the southernmost tip of Sicily, and indeed of all Italy — Isola Delle Correnti.

Thanks to an abundance of drying space, and to the help of a small electric heater, all of my belongings that got wet in yesterday's storm were bone-dry by this morning. So I was able to pack everything away again, nice and dry in the saddlebags. The couple that run Camera con Vista — the B&B that I stayed at in Modica — were incredibly nice and hospitable; the husband was nice enough to help me re-equip my bike, and to get it out of his garage (where he kindly stored it for the night).

The first challenge of the day was getting back out of Modica. Since the historic centre of Modica is at the bottom of a valley, away from the main highway, I basically had to ride back the way I'd come in order to get out of town. It was a fairly tough ride — about 20 minutes straight of reasonably steep uphill — but the solid breakfast and last night's solid sleep combined to make it easy enough. Once back on the main highway, it was reasonably easy riding for the rest of the morning: almost entirely flat; lovely weather; and charming coastal farmland scenery. 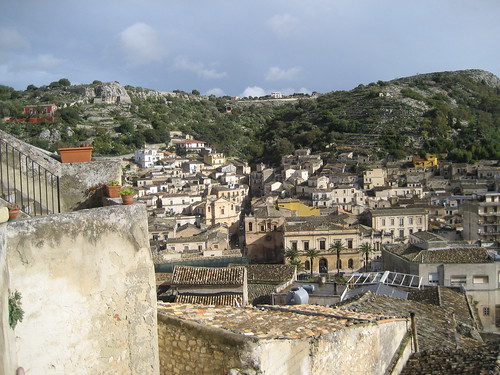 From Modica, my route soon took me to the town of Ispica, which is where the gentle coastal plain of the south-east Sicilian peninsula basically begins. I didn't stop in Ispica — except, that is, to admire the dazzling views that it commands of the gently rolling farmlands all around, and of the sparkling south coast beyond. From Ispica, I continued on to Pachino — the hometown of my Sicilian angels — not by way of the main highway, but instead on a lesser country road, that meanders through lazy farmlands peppered with numerous greenhouses. 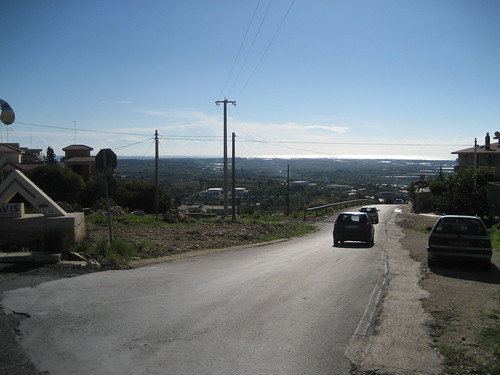 When I reached Pachino, my overwhelming first impression of it was "lazy Sunday town". The streets were very quiet; and the only people out and about were those lounging in the coffee bars (of which a few were open), or lethargically wandering through the town's humble little Sunday market. Not the most exciting place in the world — which was all the more reason for me to quickly move on, and to head south. As far south as you can daym well go on this island.

The south-east peninsula of Sicily is a really quiet, rural little pocket of the island. I assume that it gets its fair share of tourists in the summer: but at this time of year (as with everywhere), it's dinky-dai laid-back local life, and not a speck of anything more. It was a very pleasant ride that I took, from Pachino down to the tip — almost no traffic along the way, and more of the same rolling farms, with an abundance of greenhouses all around. I reached Isola Delle Correnti itself just before midday. 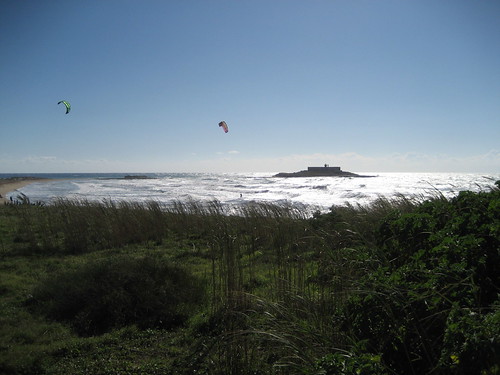 The Isola Delle Correnti is a teeny island, which is virtually joined to the southern tip of Sicily by a big sand dune. The southern tip itself is simply stunning: a long curving beach, which looks out onto the broad expanse of the Mediterranean (and Africa beyond), and which has the hot Sicilian sun soaking down on it all day long. When I arrived there today, I found a group of windsurfers doing their thang on the beach here — looks like an incredible sport, I'll have to try it some day. 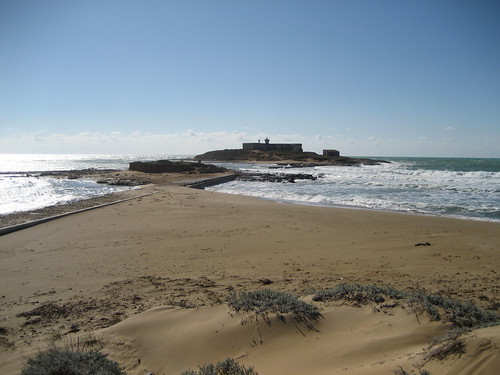 Sand dune stretching out to the island.

I left my bike at the entrance to the beach — seeing that the place was almost empty, there was no need to lock it up — and I proceeded to make the final trek to the tip on foot. It was only about 10 minutes of walking each way, to the tip of the sand dune and back. I said hi to the windsurfers along the way — they were quite busy catching their roller-coaster waves, though, so they didn't have much time for crazy Aussie cyclists. Anyway, now I can say I've been to the southern tip of Italy: I don't think it's the southernmost point in Europe (that's probably in Spain?), but it's still a cool place to reach.

From Isola Delle Correnti, I rode back up the road that I came down, and I continued on to the town of Portopalo. There really isn't any proper town, as such, on the southern tip itself — Portopalo (therefore) is the most southerly sizeable town in Sicily. Anyway, Portopalo seems to be the main tourist centre of the southern tip area — that's where all the tourist-oriented signs in the area point to — although I'm not sure why, 'cause there ain't very much there. As most small Sicilian towns are, it was rather dead of a Sunday afternoon. So I just rode through it very briefly, and then took the coastal road back up to Pachino (which was equally dead — more so than when I went through it earlier today). Nice views along the coast here, though — and as of this point, I was officially back on the Sicilian east coast. 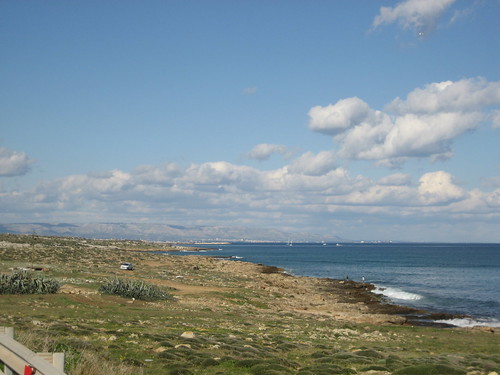 East coast route back to Pachino.