Continuing north along the coast — from the southern tip of Sicily — this afternoon I visited the town of Noto. Noto is the last and the most impressive of the three towns here in south-eastern Sicily which — according to my guidebook — are the jewels of Baroque architecture and town planning in Sicily. As well as a gorgeous historic centre — all of which is a UNESCO World Heritage Site — Noto also boasts some delicious gelato. When I arrived here, I found quite a lot of tourists on the street — and all of them were eating the stuff. I felt it prudent to follow the "when in Noto" principle, and to do the same. I had no regrets.

The road from Pachino to Noto this afternoon was an easy enough little stretch. It stayed straight and flat for most of the way, until rising uphill towards the end (since Noto itself is on a hill). I tackled it in 2 hours, no problem — including a stop for lunch along the way. On this route, I also saw the first other cross-country cyclists that I've seen so far on the trip: like me, the two fellow crazy-dudes that I saw had saddlebags stuffed full of supplies; although they were far better equipped bike- and clothing-wise than I was (shiny new bikes, proper bike tights for shirt and pants). Nice to see that I'm not completely alone in my mad adventures down here :P. I made it to Noto by the very civilised hour of 3pm.

Like Ragusa and Modica nearby, Noto was also utterly destroyed by the devastating earthquake of 1693, and was rebuilt from the ground up thereafter. And I must say, it really does deserve the fantastic write-up that my book gives it: the baroque buildings are quite beautiful; the rough cobbled streets (although tough on my bike wheels) are charming; and the locals are friendly and easy-going. What's more: on Sunday afternoon, every gelato store in town is open; and the generous cone-fulls that they serve are b-e-a-utiful. Nothing like continuing on the grand tradition of a superb Sicilian Sunday gelato. 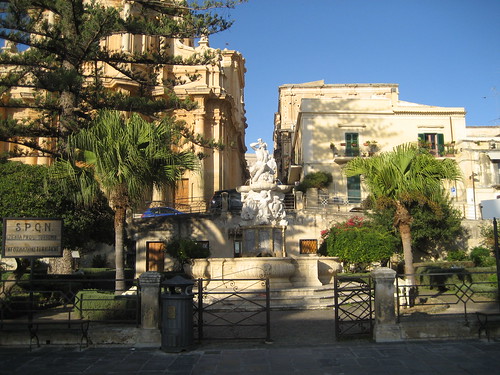 Buildings in the central piazza of Noto. 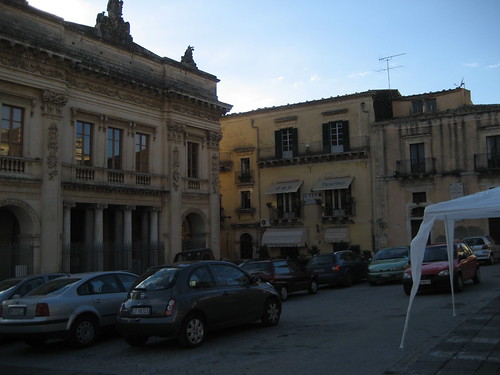 Noto is quite a touristy town: even in November, it seems that it's fairly popular, with casual passers-by and with organised groups alike (probably due to its proximity to the tourist-magnet city of Syracuse). However, while I was here this afternoon, I felt less like a tourist, and more like a tourist attraction! When I pulled up amidst the crowds for a gelato — with my bike setup as crazy-looking as ever — I suddenly became the centre of attention in town. Everyone was impressed with the bike, and with my story of how I'm cycling around the whole island of Sicily. Many came closer to get a good look, and to give me stares as though I was a creature from Mars. Anyway, I didn't mind: always nice to know that people are interested, and that they think it's a good idea, if a bit insane.