Skiing with the Swedes

It wasn't what I had planned, but it's what happened: today I was crazy enough to hit the slopes with Nikolas and Viktor — the fearless Swedes of Snowbunnys — and to embark upon a grand tour of the resort with them. We covered an awful lot of runs today, and most of them were in the eastern area of the resort, which I didn't get around to visiting yesterday. Plus, we managed to navigate our way around for the entire day, without getting stuck or having to catch a bus once: it was lifts, gondolas and skis all the way. And as an added bonus: I even survived to tell the tale.

The day's tour began much like my route yesterday: up the Hahnenkammbahn from the village; over to the Steinbergkogel chairlift; and then continuing on to the top of the Pengelstein. From there, however, things got really interesting: we boarded the "3S", the enormous gondola that spans the valley between the eastern and western halves of the resort; and the gondola with the world's highest maximum elevation (at its centre). The 3S is a colossal beast: not just in its length and its elevation above the valley floor; but also in the size of the cars themselves — each one can hold at least 20 people (along with all their gear). This, my first-ever ride on the 3S, was quite an experience: and the views while traversing the valley were quite spectacular. 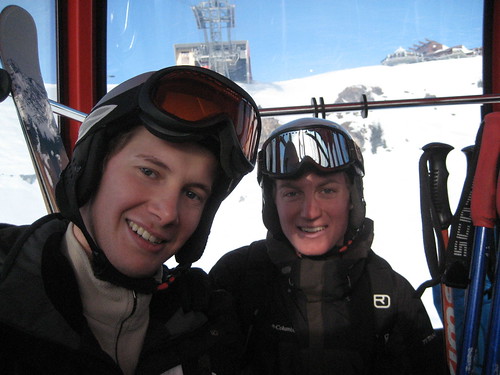 Nikolas and Viktor on the 3S. 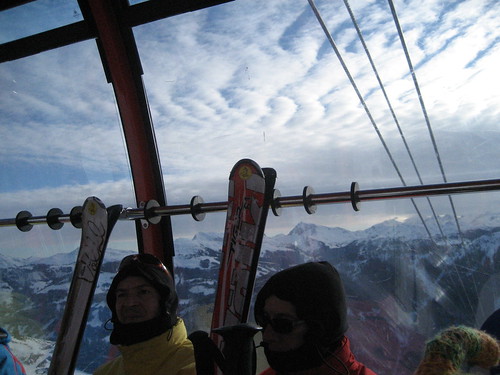 View while riding the 3S gondola.

Once the mighty 3S had delivered us to the other side, we began our grand tour of the eastern half of the resort. The eastern half follows the traditional "lifts along a ridge" resort layout: for most of the way, there's basically a single mountain ridge extending east; and chairlifts and runs are lined along the ridge one after the other, making it easy to tackle them in a straightforward sequence. We started at Würzhohe (the summit where the 3S drops you off), and from there made our way in turn to Bärenbadkogel, to Zweitausender, and finally to Resterhöhe. We stopped for lunch somewhere near Zweitausender: we all took the economical option of munching on sandwiches, which we'd brought with us from the hostel. We nearly made it all the way to Paß Thurn — the eastern-most extremity of the resort area — but figured that we'd better turn back, before we had a chance to get there. 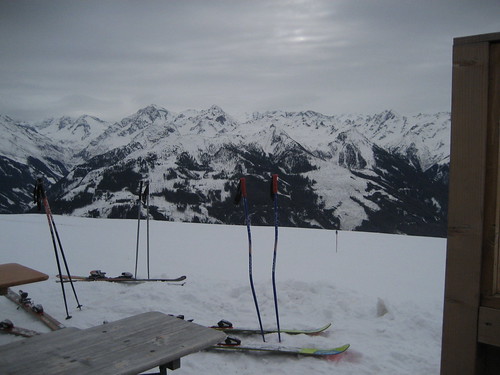 By and large, the runs on this side of the resort are great fun. They're not particularly long: but they're nice and wide and steep; and the chairlifts that service them are modern and fast. Plus, they're much better-connected than their counterparts on the western side. It's hard to say for sure: but we're all in general agreement that the snow's a bit better on the eastern slopes, too — seems to be less icy, even though there also hasn't been any fresh snow here for at least a week.

All things considered, the Swedes took it pretty easy today: due to the ice, they didn't wander off and try all the unmarked, off-piste adventure stuff that they might have tried otherwise. Although we did have one small off-piste adventure: nothing more than a small black run, really, with a few trees and rocks to dodge, and with some steep and narrow bits to overcome. I would have been fine on this run, were the conditions better: but since this was an ungroomed run on crusted-up powder snow, my turning ability all but flew out the window. I stacked it about halfway down, and found myself bereft of one ski, and with my face in the snow. The stack wasn't too serious — although my stock did whack into my mouth, and I had a bleeding lip for a few minutes (could have been much worse). Other than that, the day was accident-free. 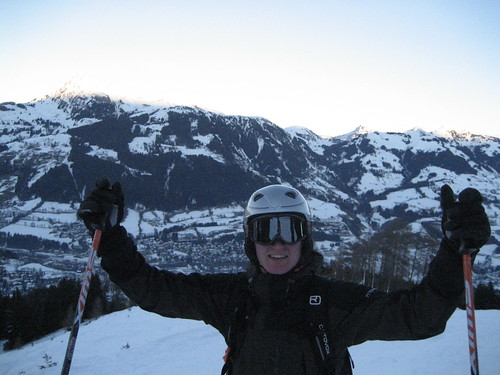 Viktor conquers the mountain for Sweden.

We were very proud of ourselves, in that we managed to traverse all the way back to Hahnenkamm (backtracking across the ridges to Würzhohe, riding the 3S back, etc), and thus managed to ski right back to Kitzbühel village. We allowed enough time to make the trek before the various gondolas and chairlifts closed for the day — which, unfortunately, they tend to do quite early around here, due to the onset of dark from 4pm onwards (as opposed to 5 or 5:30pm at the resorts in Australia). Hence, we succeeded in exploring an impressive amount of the resort area; and all without taking a single bus through the valley!

As for the crowds on the ski slopes: they were still nowhere to be seen today! Once again, we were spoiled rotten with not a queue in sight on the chairlifts, and with slopes that were very sparsely used indeed. Additionally, the far eastern runs were even quieter than the more accessible runs to the west. I don't know where those dreaded Christmas crowds are: but as far as I'm concerned, they can take all the sweet time they want. While they dilly-dally, I'm carvin' it up.

The day ended with a spectacular and most unexpected little stack on my part. I didn't think that you could have a stack, after you've already taken off your skis and boots, and changed into your walking shoes: but I now know that it's perfectly possible. I'd just reached Kitzbühel, and changed back into my shoes, when I slipped on the ice, and went for six like a house of cards. Bang, smack onto my a$$. Ouch: have to be more careful next time — you never know when that slippery stuff can bite you on the behind.