Yesterday — our first day in Pilcopata — was fun, but it wasn't a jungle tour. Playing with animals, yes; horse riding, yes; but jungle tour, no. Today, we had the real deal. Hike through the jungle, bizarre plants, deadly insects, dazzling waterfalls — you name it, we saw it. Pretty fascinating, just what kind of exotic stuff you can find out here. And also pretty scary, to think that this is what you find on the edge of the jungle, where it's still relatively tame. I wonder what the middle of the Amazon must be like?

As with yesterday, we started by driving out from Pilcopata to the farm nearby, where we once again saw our furry friends. From there, we walked down to the edge of the river, and took a little boat across the water, to where the jungle trail began. 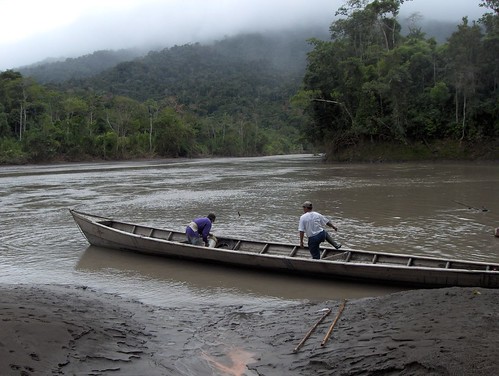 Our guide was a pretty cool local guy, who pointed out to us pretty much everything that was of interest (which in this case was quite a lot), and who bashed his way through the thick foliage (ahead of the rest of us) with a massive machete. He didn't speak any English, but all of us spoke sufficient Spanish to understand most of what he was saying. He also used the machete to whack down some bamboo stalks, and to fashion them into walking sticks for us, at the start of the hike. 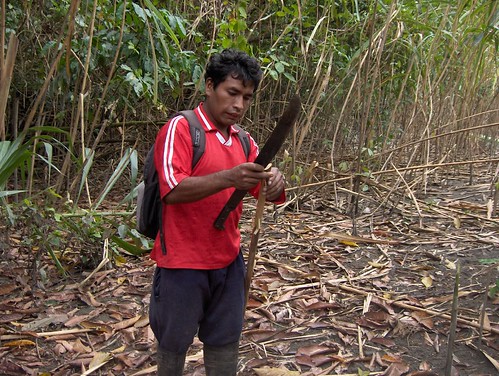 I can't remember every crazy plant that we saw on today's hike; but one that I couldn't possible forget is the one called "Me puedes ver, pero no me tocas" (lit: "You can look at me, but don't touch me"). As its name suggests, this little weed-like plant looks perfectly normal; but give the leaves a touch, and they'll immediately contract and close up, like a little child cowering in fear. 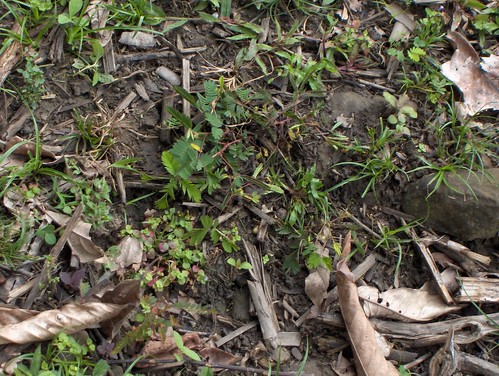 Me puedes ver, pero no me tocas.

And as for the insects: well, the plants really were nothing compared to them. People might say that Australia has some deadly and dangerous old critters, but they're nothing compared to what you can find in the jungles of South America. We saw a family of ants crossing the path in front of us at one point, and the guide casually explained: "de estos insectos, dolor para 24 horas, muchas veces muerte tambien" (lit: "if you get bitten by one of these, you'll be in acute pain for 24 hours, and you'll probably die as well"). Riiight... thanks for pointing that out, mate! Also saw some massive wasp hives, containing equally fierce and deadly insects. 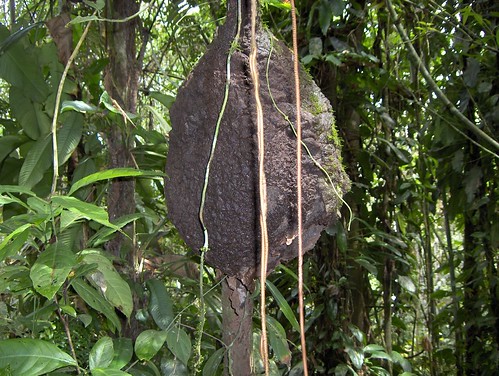 Ummm… I wouldn’t poke that if I were you.

As well as the wacky plants and insects, the scenery of the jungle itself was also quite spectacular. The foliage was a wet, lush, tangled mass of looming trees, creeping vines, spreading weeds, and little shrubs. The canopy above us was all-covering. The forest floor beneath our feet was a thick carpet of leaves and mud. The air was pure and rich with oxygen (a pleasant change from the thin, asphyxiating air of Cusco!). And the waterfalls that we passed (and there were several) were stunning, and gave off a pleasantly cool spray. 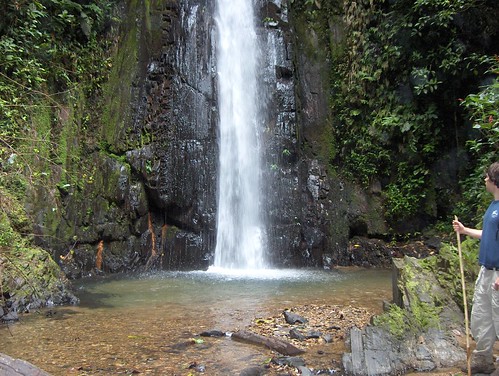 Nice waterfalls on the jungle hike.

All up, this morning's hike and jungle tour was about 3 hours, and apart from the Tarzan incident, everything went absolutely fine. At the end of the hike, we reached a nice little (made-for-the-tourists) shelter, where we had a monumental lunch, and relaxed and reflected on the bizarre things we'd seen in the jungle.