One thing that's really struck me, during my time in Sicily so far — but I assume it would strike me almost anywhere in Europe — is the amazing way in which old meets new around here. Europe is such an endlessly rich historical region: the cities are sometimes thousands of years old; patchwork farmlands have remained virtually the same for generations; and relics of past civilisations abound everywhere, from lonely mountaintops to musky caves. They've managed to preserve all of this history remarkably well; and yet amidst it all, they've also laid gleaming train tracks, industrial-strength power and communication lines, and wide tarmac freeways. It's a constant, in-your-face contrast and clash of eras, everywhere you go — but somehow, it all fits together — rather than conflicting, the interwoven old-new, natural-artificial tapestry of the European landscape is forever complementing itself, and giving an image of harmony and logic. How do they manage it? 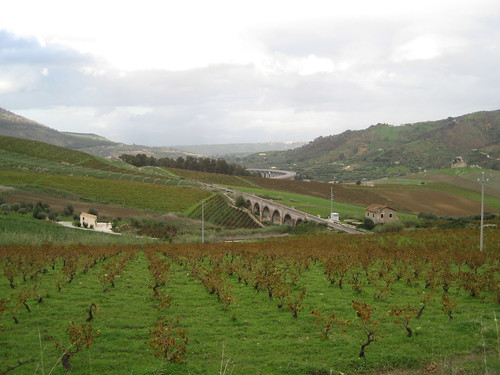 Here in Sicily, high-speed train lines and multi-lane autostrade carve up centuries-old farmland; but nothing really seems to get in anything else’s way.

It was while I observed this view — on the road just short of the ruins of Segesta, this afternoon — that the old-and-new thought struck me. And the conclusion that I drew from it was: yeah, why shouldn't it be like this? If you think about it, this really is the way things should be in the modern world. There's no reason why the 21st century's great, monstrous feats of engineering should come at the cost of everything beautiful that we've built before them. They're just another piece in the great puzzle of human history and geography, and the logical thing for us to do, would be to find a place for them amidst everything we've already created, not to mention everything that G-d created before we were here in the first place.

Blending modern infrastructure into an ancient landscape also has huge practical benefits — instead of destroying the areas they pass through, modern transport and communication links can simply make them more accessible than they've ever been before. This is 2007. Why wouldn't you be able to drive through Sicilian farmlands, and not have to worry about potholes on unsealed dirt roads? Or cruise through the countryside in the comfort of your luxury high-speed train carriage? What's wrong with visiting some isolated Greek ruins, and having perfect reception with 5 different mobile phone networks? Perhaps even wireless Internet access (only a matter of time)? Rather than marring an amazing continent, the engineers and constructors of modern Europe seem to be taking it to ever greater and more romantic heights.