Well, old chaps, I'm going to commence my British Blogging in a decidedly, well, English way: by moaning about the weather. It seems that every person I've ever met in my life, who's been to England, was 100% right: the weather really is s$%# here. And no, that garbled 4-letter sequence does not translate to "spantabulous"; guess again. Today's weather in London is about as English as any weather I could imagine: cold, overcast, drizzly, and unbelievably gloomy. I guess that's why the Chili Peppers sing about London in the summer time; because now that it's Autumn, there's nothing to sing about at all. Nevertheless, it's still good to be here.

The lousy weather is one excuse for my not doing much today. My silly morning nap is another. Anyway, despite these hindrances, I did manage to get in a little bit of exploring today, for the first day of my life here in the glorious Mother Country. I walked up to King's Cross Station, one of London's most famous train stations, as well as a very grand old building. I looked round, but I saw no sign whatsoever of Platform 9¾. I also took a walk up to Regent's Park, which is a serene place to walk through, and also home to London's zoo (which was shut by the time I walked past it). I walked up the hill just north of the park, which would — on a better day — command a sweeping view of the city.

Today, however, the view was average to say the most.

I wandered around the area south of Regent's Park a bit, and managed to stumble upon Baker St. Being a fan of the famous Sherlock Holmes, I immediately recognised this street as the (fictional) home of the detective — and I decided it was worth having a squiz around, to see if Sherlock actually has a (non-fictional) house here these days. And it turns out that he does! 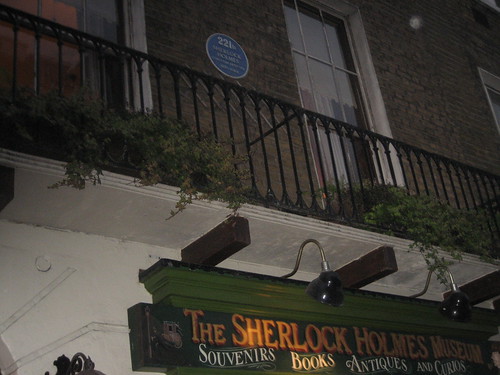