Yesterday I was halfway there. Today I made it all the way — I've landed in paradise, on the scuba-mental island of Ko Tao. Only took two nights, two buses, and a 5-hour ferry: and let me tell you, it was worth it. My second night bus left Bangkok yesterday evening — after my little pre-bus adventure had concluded — and the ferry from Chumphon to Ko Tao departed at about 6am this morning. Now that I'm here, I've got a feeling that I won't be leaving for a while.

Last night was the second episode of my experience with Thailand's notorious "tourist buses". Overall, it was once again a smooth ride — although it had a few more bumps than did the first episode. The bus didn't arrive at our little "terminal" in Bangkok until almost 8pm — making it close to two hours late — which meant that even after my crap-wheres-my-bag frenzy, I was still sitting and waiting with my comrades for quite a while. Apparently, the bus we were meant to catch had suffered an accident en route to us, and so the delay was caused by their finding a replacement bus for us. Naturally, the fact that the bus had crashed before it even reached us was oh-so-reassuring news for us all :P.

Once it finally left, the bus ride was by-and-large uneventful. I sat next to an Italian guy, who's a street vendor of jewellery in Rome, and who's headed down to Ko Pha-Ngan. He's been to Thailand numerous times: he tries to get away from work, and to escape here once a year if possible. Also speaks fluent Spanish, as he lived in Spain for several years, at one point in his life. So we ended up talking in Spanish for most of the trip: he seemed to be more comfortable with that than with English (although his English is pretty good, especially by Italian standards); and as you may have heard, one month in Italy did next-to-nothing for my Italian skills.

The unsolicited midnight food stop happened again tonight: same deal — bus-company-owned restaurant in the middle of nowhere; overpriced food; and a strange expectation that we (the passengers) would be desperate for a three-course meal in the dead of night. Was a good chance to use the toilet, though. Before we headed off again after the food stop, though, we had a bizarre and random bus change: we swapped vehicles with a busload of fellow farangs headed in the opposite direction to us (i.e. back to Bangkok) — so we had to transfer all our luggage and knick-knacks over to the new bus, which was a right pain in the a$$. No idea as to why the bus-swap took place: but this is Thailand, and it was (by then) 1am, so I didn't ask questions.

We were rudely awakened once more at about 3am, for yet another bus change. This time, everyone going to Ko Tao had to disembark, and to wait for a different bus, that would come and pick us up shortly. There was at least a reason for this change: everyone going to Ko Pha-Ngan or to Ko Samui was catching their ferry from Surat Thani (which, like those two islands, is further south); while those of us bound for Ko Tao were catching the ferry from Chumphon. It was during this bus change that I met Alex and Caroline: hell of a time (and a state of fatigue) to meet the people who would be my best friends for the next week; but like they say, nothing bonds people more tightly than enduring hardship together. And tonight certainly was a night of some hardship.

It was a short ride over to the port town of Chumphon. Once there (at around 4am), we were plonked into the waiting-room at the pier, and told to wait for 2 hours until the boat was ready to leave. The waiting-room was equipped with a few overpriced Internet terminals, and with an open-for-business breakfast bar. I elected not to utilise either, and I instead managed an extra hour's sleep on one of the wooden benches inside.

As promised, we were woken up at 6am, and — in the dim pre-dawn light of Thailand's southern Gulf coast — we were marshalled onto the ferry. This was my first ferry ride in quite a while, and it really was a great trip. Alex, Caroline and myself initially sat ourselves down in the lower deck, which was being systematically traversed by hawkers advertising dive packages on Ko Tao — but we soon relocated to the top deck, from where we had a simply gorgeous view of the sunrise over the river that flows by Chumphon, and then of the open sea. Even at 6am, it was quite hot: I can see that southern Thailand is going to present no chilly situations whatsoever. 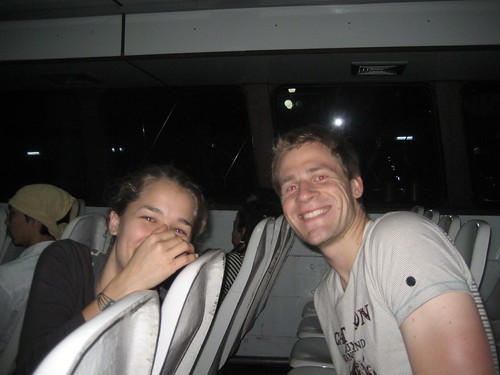 Caroline and Alex in the lower deck. 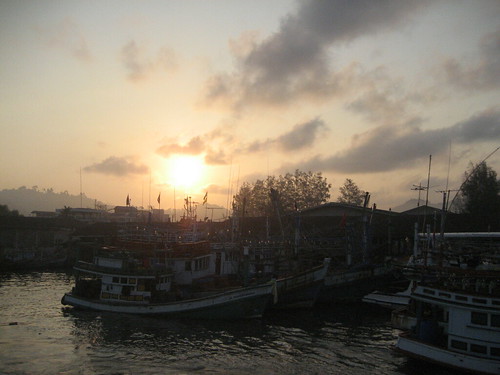 Sunrise over the river. I always prefer looking at photos of sunrises — when you’re actually watching them, it’s always too early to give a toss about how beautiful they are. 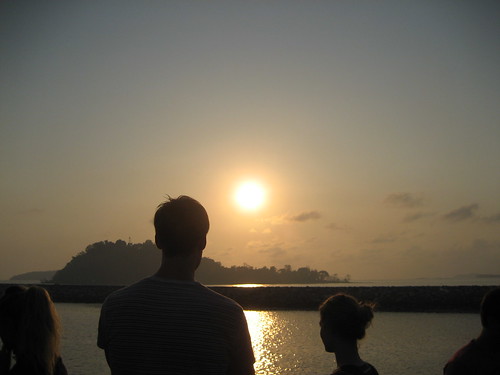 Alex is really tall. Caroline is not. Sunrises rock (except it’d be nice if they could occur a bit later in the day).

The ferry ride was about 5 hours in total. It was a dazzlingly scenic ride the whole way: but it was also rather a rough ride for a while, as the seas became quite big and choppy. I stayed up on the top deck for a while, where I became acquainted with the large French contingent that was keeping us company on the ride (French exchange students, who have been studying in Bangkok for several months). A few hours in, and the choppiness was making me feel more than a bit seasick: so I retired back down to the lower deck, where I fell asleep for a while, and where I managed to avoid throwing up. Good thing I shirked on the breakfast, back in Chumphon — much better to save it for our landing at Ko Tao. 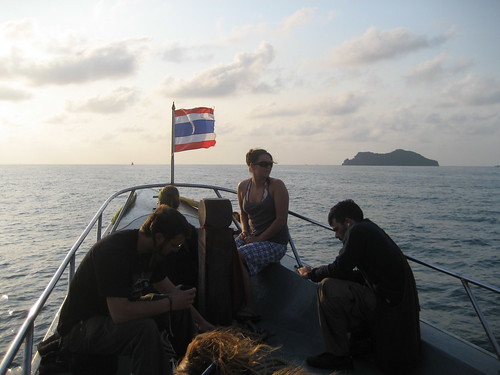 Out on the open seas.

Finally, Ko Tao herself came into sight; and before we knew it, the island's only real port — the town of Mae Hat — was right in front of us. We docked at the pier in Mae Hat: and when we stepped off the boat, we were ambushed by yet another large brigade of dive-package hawkers. The resort-touters were quite loud, but they weren't overly pushy or aggressive: in the spirit of all things Ko Tao, they were more friendly and informative than anything else. Plus, they were all simply itching to give all of us (and by "us", I mean anyone and everyone) a free taxi ride to whichever resort they happened to work for. We accepted the ride to the AC resort in Sairee: and although we didn't ultimately sign up with AC for our dive course (we went with Ban's instead), we were still headed to Sairee (the biggest beach on the island), and so the complimentary lift was a boon. 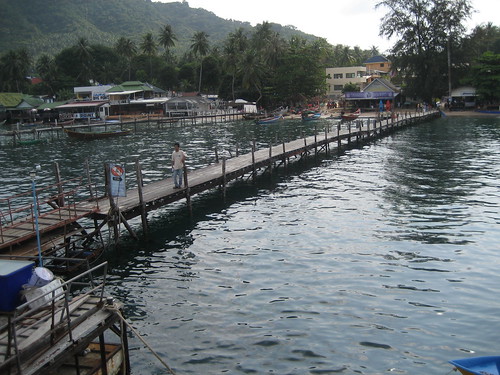 Welcome to Ko Tao: the pier at Mae Hat.

One unfortunate little event in our otherwise super-relieving arrival at Ko Tao, was what Caroline discovered when we reached Sairee. It turns out that the poor girl was robbed last night on the bus! She was a bit silly, and she left her purse and all her money inside her large backpack, which went into the luggage compartment underneath the bus. Clearly, someone went through all the bags while we were travelling, and nicked whatever took their fancy. More likely than not, the thief was not only helped by the bus driver, but was probably also working for the dodgy bus company that we went with. They stole about 4,000B from her, and left her with a measly 1,000B. Even worse, Caroline is still waiting for a large amount of overdue pay from her employer: and so as yet, she has no extra money in the bank either :(. Alex and I helped her out, and lent her some extra cash to keep her off the street until her pay arrives. I think that someone tried to open my bag, too: the main compartment was padlocked shut, but this morning the combination dials were very stiff to turn — possibly as the result of someone trying (and failing) to force my locks open. Anyway, these days I keep all my valuables on my person while in transit: the locks on my bag were merely an extra precaution.

‹ Alex and Caroline And then there was paradise ›
Filed in: Ko Tao • Dodgy • Bus trips • Boat rides • Too early • Sigh of relief • Sunrise