Hiking inside the Cañon del Colca

Our second day doing the Cañon del Colca hike was spent entirely within the bowels of the canyon. We started from the little village hospedaje that we slept in last night, and hiked all morning until we reached the oasis, stopping along the way at Victoria's museum. As with yesterday morning's hike, the walking this morning was quite pleasant, and the scenery was simply to die for. 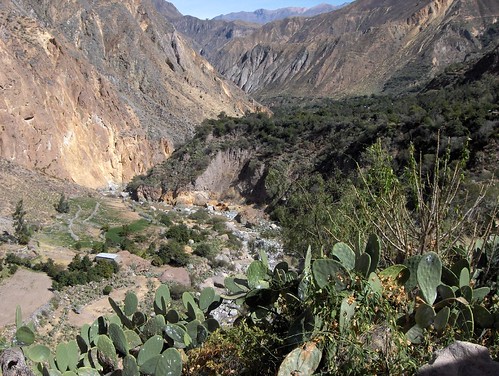 River and greenery winding through the canyon. 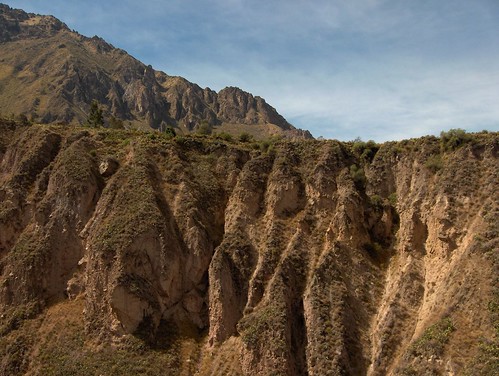 Sheer cliffs of the canyon. 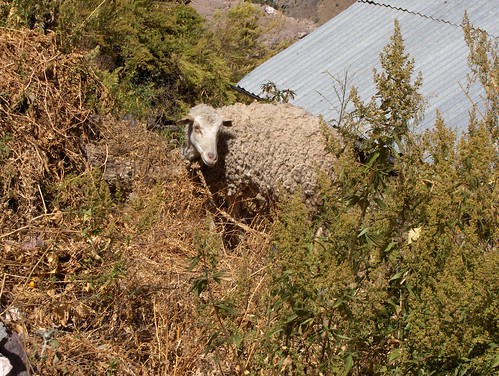 Sheep in a village in the canyon.

Terraced farmlands in the canyon.

This morning's hike was about 3 hours to Victoria's museum, and then about another hour after that, to get to the oasis. It was the easiest walking on the whole tour, since the bottom of the canyon is relatively flat: much easier than getting into or out of the canyon. We hugged the farmland just below the cliffs on the southern side of the canyon, which seems to be much greener and gentler than the barren, forbidding cliffs of the northern side. Crossed a few streams, and saw a few little villages along the way. Apparently, the villages here in the canyon received electricity for the first time, less than a year ago: so they're just starting to learn that there are things you can do after dark in the evening, such as watch TV!

The landscape here in the canyon is some of the most amazing stuff I've seen so far in Peru, and perhaps anywhere in the world. These Peruvian highlands really are just mind-blowingly stunning: I doubt that you could find anything to compare with them, anywhere else in the world. The Bolivian altiplano, the Amazon jungle areas, the desert — it all pales in comparison to the stark, enormous, and incredibly lush and fertile highlands of Peru, with its amazing and friendly Quechuan inhabitants.