It's been seven years since I was last in New York City. During my previous visit, in September 2000, I went up the famous twin towers of the World Trade Center, and I admired the then-fabulous view from the 110th floor. Today, for visitors to New York — courtesy of a small but extremely cruel and misguided group of radical individuals — that is no longer possible. Instead, thousands of visitors every year make the "pilgrimage" to what is now known internationally as Ground Zero. Today, I became one of these pilgrims, as I returned to this most confronting and tragic of sites. And like everyone else, I went there to mourn, to show support, and to pray; but mainly, just to see what the world's most famous hole in the ground actually looks like, and what they're doing with it. 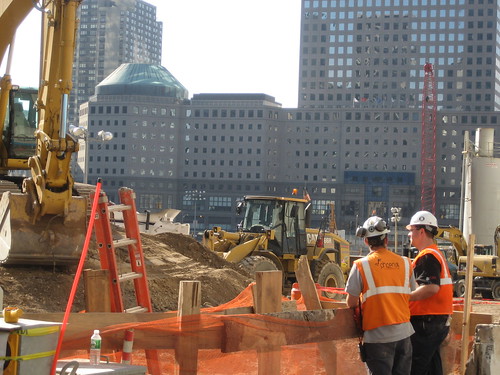 When I arrived at Ground Zero this afternoon, much of it was as I expected it would be, but a lot of it took me by surprise. I wasn't at all taken aback by the fact that there are still construction workers labouring at the site, seven days a week (to this day). Nor did it shock me that the whole area is still fenced off, and that you can only really see and take photos through a series of chicken-wire barriers. But what did surprise me was just how much they've managed to clean up, and even to rebuild, thus far — the new underground transportation hub and subway station looks very impressive, and it's been operating for some time already; and work is currently well underway on the foundations of the new "Freedom Tower" that they're planning to build in the place of WTC I.

Plus, I expected there to be a lot of tourists here; but I didn't expect people to be so brash about walking around, trigger-happy with their cameras, and treating the place as though it was "just another attraction". What do they think it is, Disneyland? Please, people: over 4,000 people died here — for G-d's sake, show a bit of respect! By all means, take some photos. But it couldn't hurt to be a bit more discreet about it, and to put away those cameras after a few snaps, and just stand and do some quiet meditation. 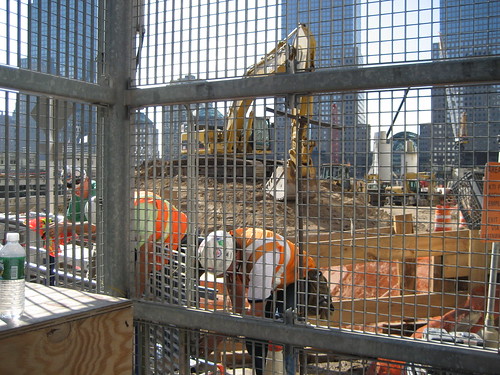 Looking through the fence to the construction site.

I remember when I visited the WTC with my parents, back in 2000. We had some fight with the staff at the ticket counter for the observation deck: I think it was something about getting a discount — my mum had some vouchers that she was sure entitled us to get in for less than the usual price, but the staff wouldn't accept them. As I recall, we got the tickets for less in the end, and my mum won the argument — I'm not 100% sure about that; but Jewish mothers generally don't lose arguments; and let me assure you, mothers don't get more Jewish than mine. So it seems highly likely that that's how it happened. Anyway, my point is that looking back, it all seems so frivolous. Such an inconsequential memory, compared to the life-changing and life-breaking memories that other people hold of this place. Imagine how different it could have been, if we'd decided to visit in September 2001, instead of September 2000? Thank G-d we went when we did.

After I'd taken a few snaps, I put my camera away. I leaned against the hard, steel fence of the cleanup and construction site, and I prayed. I prayed for all those who fell victim to the tragedy of 9-11, for their grieving families, for their friends, and for all those who cared about them. I prayed for all the businesses, all the institutions, all the efforts, and all the papers and books that were ruined along with the buildings that housed them. And I prayed that something like this should never happen again — especially in my beautiful, beloved home city of Sydney, which I am so afraid is the next logical target for a big terrorist attack in this world.

Anyhow, I'm glad that the rebuilding is already underway, and that they're going to build a new set of soaring towers, rising up from the ashes of the old ones. It's a symbol of confidence, and of defiance against what those misguided individuals tried to do here. It shows that no, you did not defeat us: you did not achieve your aim — we are not afraid! You destroyed it once, but we'll build it again, bigger and even better than last time — and we will not be cowed or pushed into submission by you. We, the people of the Western World, are over this.

Nice pictures. Never been to New York, hoping to see all this next year. Thanks.