The pool dive yesterday was just practice. Today was the real thing: at 7:30am we were on the boat (little dinghy from Sairee beach, then we transferred to a big boat for the actual diving); and by 9am, my first ever scuba dive had begun. All scuba diving must be done with a buddy — and for today, my buddy was Alex. Once again, the deep-sea Dutchman Flav was my instructor. By midday, we'd completed two dives — to a depth of 12m, and at the sites of The Twins and White Rock. Contrary to my tip-top expectations, real diving proved to be quite a challenge: but I survived the ordeal, and I'm ready for whatever the next day holds in store. 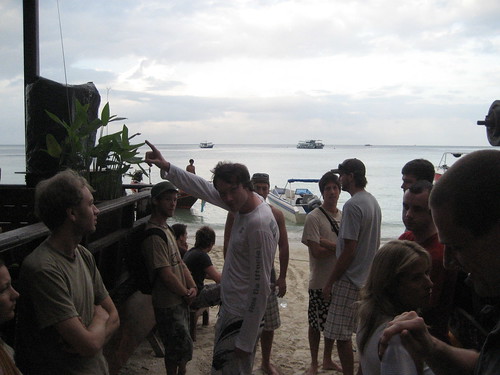 Geared up on Sairee beach, and ready to sail off. 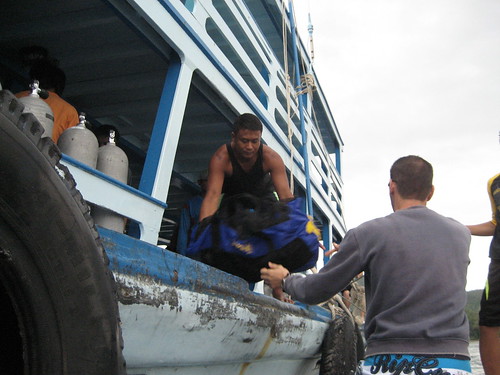 From the little boat to the big boat.

Once the motorised dinghies had delivered us all safely to the big dive boat, we chugged off in the direction of The Twins, our first dive site for the day. While en route, it was our responsibility to gear up, and to prepare ourselves for taking the plunge. We'd been taught the procedure for gearing up quite thoroughly, over the past two days — from the videos, from Flav's lecturing, and from the pool practice — nevertheless, I was one of the worst in the group at recalling all the steps involved; I simply ain't got a head for remembering things like that. I needed help with almost everything, from setting up my BCD, to checking my tank, to connecting my regulator. Even Flav's favourite acronym, BWRAF (BCD, Weights, Regulator, Air, Final OK) — which he substitutes with "Bangkok Women Really Are Fellows" :P — wasn't enough to guide me. 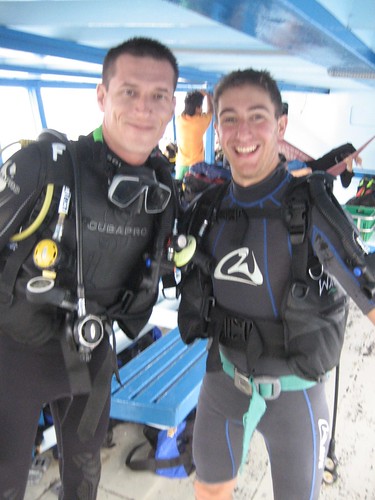 Flav and I: gearing up was complicated, but I managed it in the end.

And then there was the dive itself. The first hurdle was jumping in: this involved taking a big flippered-foot stride off the edge of the boat, into the water 2m below. It was a scary step, but I was OK once in the water. Next, we had to deflate our BCDs, and to gradually begin our descent — and this was by far the hardest and the most unpleasant part of the whole experience. Controlling a slow descent was easy enough, as we held onto the boat's anchor rope while we went deeper. The problem was with equalising: the all-important process that involves letting your ears and sinuses adjust to the increasing pressure, with the help of such techniques as holding your nose and blowing out through it, wiggling your jaw from side-to-side, and massaging your throat.

Some people are naturally better equalisers than others. On the scale of things, I'd say that I'm about as hopeless as they get. Every time I descended just a few centimetres deeper, I experienced an acute pain in my ear passages — a clear sign that my body was struggling to adjust to the pressure change. The only way to lessen the pain, and to equalise properly, is to simply descend more slowly, and to perform the recommended techniques as often as possible. I think I was the slowest in my group — everyone else was waiting for me when I reached the bottom of the anchor rope — and even once on the sea-floor, my body still took several minutes more to fully equalise.

Our first dive was to a maximum depth of 12m, and we were underwater for a total time of 40 minutes. We spent most of the time practicing various scuba exercises, which we're required to complete as part of the Open Water certificate, and which were similar to the ones that we performed in the pool yesterday. We also had some time to do what scuba diving's all about — that is, to explore the seabed and to witness the marvels of the underwater world. The Twins is apparently a fairly average dive site, but I was nonetheless awed and impressed by the abundance of colourful and beautiful fish that swam around us constantly.

Ascending to the surface was much easier than the painful process of descending, but it was still not without its difficulties. I made the mistake of performing the equalisation techniques during my ascent, which apparently hinders rather than helps you when surfacing. I managed to adhere to the number one rule of diving ("never hold your breath"), by breathing out for the duration of my ascent — as the air in your lungs expands when the pressure around it decreases, and as holding your breath while ascending can lead to serious lung overexpansion injury. When I surfaced, I was none-too-ecstatic to find that I had a noseful of blood, and a throatful of horrible mucus: apparently, these are common and harmless side-effects for beginner divers; although I seemed to suffer them worse than did anyone else. Alex was also rather alarmed to find, upon surfacing, that his air tank was almost empty: seems that because he's such a giant (about 6½ feet tall), he consumed air at a much faster rate than the rest of us. Apart from Alex, we all had about half a tank remaining.

Once back on the boat, we enjoyed a break of about 1 hour, while we sailed over to the second dive site. Tea and biscuits were provided by Ban's, of which I was most appreciative. The second dive was pretty similar to the first: same depth and time; similar exercises and underwater sights; and similar problems and hurdles. Sorry, but I haven't got any photos of the diving itself: taking underwater photos requires a professional diving camera, and a pressure-rated waterproof camera housing unit, neither of which I possess. Even Caroline's shiny new waterproof Olympus baby can't be taken diving, as it's only pressure-resistant to 3m; if taken deeper, it would most likely implode. And speaking of Caroline: sadly, she was feeling quite sick this morning, so she missed the dive — she's now one day behind in the course, and she'll need an extra day to catch up. 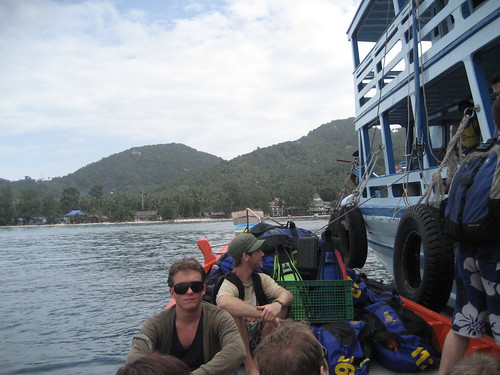 Motorised dinghy back to Sairee.

My impression of diving, after today's first experience of the real thing: it's good once you get down, but getting down sucks. Basically, I'm a pretty crap diver: I had acute equalisation problems; I also experienced surfacing problems; I was unable to adequately remember the procedures for gearing up; plus, I was the slowest in the group at swimming underwater with flippers. Not a terribly promising start! Anyway, as a cheesy Aussie Tourism NT advertisement once said: "you'll never never know, if you never never go".